Prateik starrer Issaq, has won a million praises from the audiences across the nation. The trailer of the film has been very well received for its romantic as well as dramatic visuals. After Salman Khan admiring the trailer, Issaq has left ace producer and director Karan Johar, too, spell-bound! Karan Johar was pleasantly surprised to watch the trailer of this adaption of ‘Romeo and Juliet’. He tweeted: 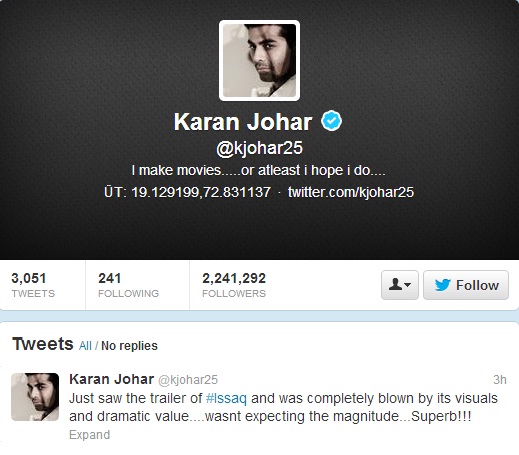 Set in Benaras, the story of the film is based on the famous English playwright Shakespeare’s tragic love story, Romeo and Juliet. Check out the amazing new trailer yourself and see what everyone is chatting about!

The chemistry between the lead pair, Prateik Babbar and Amyra Dastur, has also been appreciated by all, this duo promises great things. Directed by Manish Tiwary and produced by Dhaval Gada and Shailesh R. Singh, Issaq is slated to release on the 26th of July, 2013, be sure to catch at a theater near you!