Yash Raj Films is delighted to announce that it will distribute Dar Motion Pictures and Emmay Entertainment’s “D-Day” in the international market. Having teamed up with only the best in the business and distributing some landmark films through its worldwide distribution network, YRF continues its pursuit for quality entertainment by hand picking nothing but the top movies from well-known banners. This time Yash Raj Films has teamed up with Dar Motion Pictures and Emmay Entertainment to distribute their latest and much awaited production “D-Day” overseas.

Nikhil Advani’s new thriller high action movie “D-Day”  will be releasing in theatres worldwide on 19th July 2013. The story follows a team of RAW agents and trained specialists on the hunt for the most wanted man in India. Wali Khan (Irrfan Khan) was sent into Karachi, Pakistan by the Chief of RAW Ashwini Rao (Nasser) to report the activities of the Most Wanted Man in India. Rudra Pratap Singh (Arjun Rampal) Indian Armed Forces, MARCOS unit, Zoya Rehman (Huma Qureshi) RAW Explosives expert and Aslam (Akash Dhaiya) a petty thief from the streets of Mumbai, recruited by RAW infiltrated Pakistan to join Wali Khan and carry out the mission to bring back The Most Wanted Man in India. 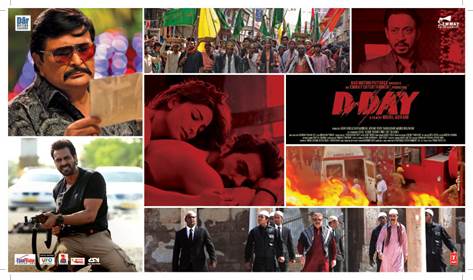 The man who was going to break all ISI protocol and security and attend his own son’s wedding. The man who could on that day be abducted and brought back to India to face justice. The team sent in to bring The Most Wanted Man in India, did the unthinkable – They carried out the most daring operation and almost got away with it. Almost because, something went horribly wrong.