Any time you see a movie that has music by A.R. Rahman, you know you’re in for a treat with regard to the soundtrack.  “Raanjhanaa,” is a love story set in Benaras that was released on 21st June.  The film stars Sonam Kapoor, Dhanush, and Abhay Deol.  Best of all it features the legendary A.R. Rahman’s music.

Like the film, the soundtrack has been appreciated by the public.  So, EROS Entertainment has released the video from the film for the song called ‘Aise Na Dekho’ from “Raanjhanaa“:

The song, featuring Sonam Kapoor and Dhanush is sung by the genius A.R. Rahman himself with backing vocals by Karthik.

Since its release, Eros International’s “Raanjhanaa” has been going strong at the box office.  Within a week of its release, its collections surpassed 34 crore (US$5.8 million) and was declared a hit! The film is directed by Aanand L Rai. 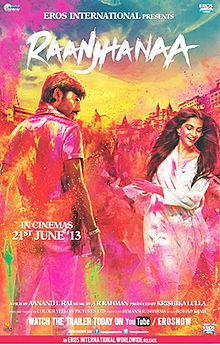