Nivedita Kulkarni is an actress and improviser and a comedian who attended school at Washington University in St. Louis, where she studied Economics & Marketing. Nivedita is originally from the suburbs of Chicago. After moving to New York City, she worked in the Strategic Design division at Saatchi and Saatchi NY. She has since studied at the William Esper Studio and at the Upright Citizens Brigade Theatre.

In 2009, at the Upright Citizens Brigade, Nivedita founded the ladies’ Listserv and email chain, which is still running today. The group has led to many collaborations among UCB women, including the popular all-female “Gentrify Brooklyn” shows. In 2011, Nivedita performed a completely improvised solo comedy act at the 20th annual Network of Indian Professionals Conference. She is the first NetIP performer to have performed a completely improvised show.This girl is just full of some amazing accomplishments! 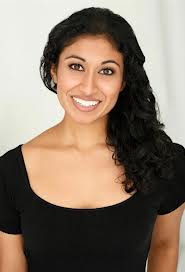 Nivedita is currently the face of Bank of America’s mobile banking campaign. You can see her on billboards nationwide. She performs regularly with her independent improv team Slambot, and is producing the forthcoming stage show “Ilyana Saves the World.” We sat down with her and talked about her work in the acting world along with how she got the role of the major Bank Of America commercial! Check out her Urban Asian profile as she talks about her journey and adventure in the film and comedy world!