“For me, a ‘Straight Ruffneck’ is someone who is not afraid to go against the norm, be different or challenge authority. The project is also an exploration into the traits and behaviors of those we often refer to as ‘gangsters’, or those that are simply violent by nature.”

‘Straight Ruffneck’ will be the second single from Superjones’s forthcoming underground E.P. entitled ‘Kill The Shadow’. Superjones says that the use of the Ragga Twins vocal is purely for a nostalgic reason, “as a 90s teen and an avid Drum & Bass fan, the Ragga Twins bring back memories of great underground warehouse raves full of good music and carefree madness!”. The Ragga Twins have been around for over 30 years, recording and featuring on numerous records. They have also toured alongside Shabba Ranks and James Brown. The cover for the single features the work of Aman Mojadidi, an American-born Afghan artist. 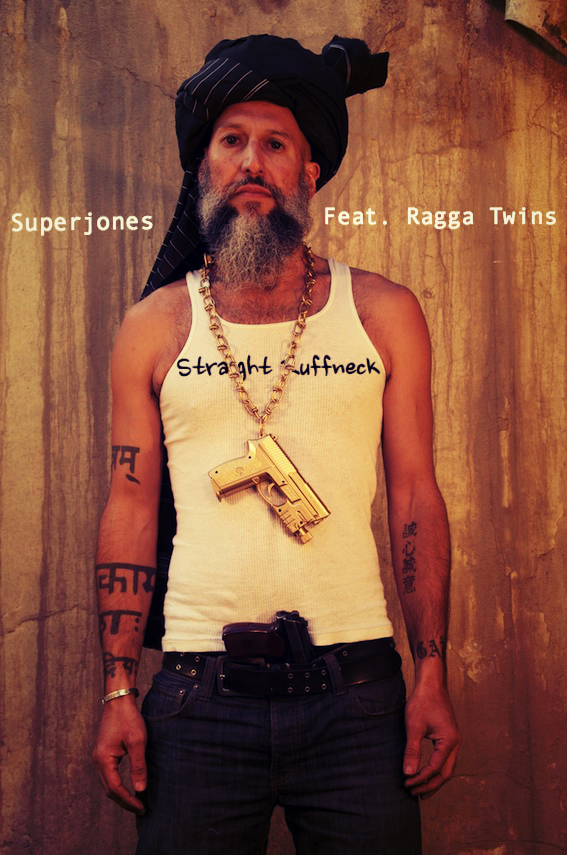 The image, entitled “Dressing for Work”, was taken as part of a project called ‘A Day in the Life of a Jihadi Gangster’ which ‘explores the idea of globalized gangster styles and iconography while exploring Aman’s own dual cultural heritage as an American-born Afghan with strong familial ties to politics in Afghanistan, including jihad’. Aman’s work has been exhibited in over 12 countries including New York, Paris and Mumbai. He has also featured on CNN and TEDTalks. The use of Aman Mojadidi’s work is part of a wider but small, self-run social media marketing initiative which sees Superjones posting daily pictures in the run-up to the release.

The campaign entitled ‘#StraightRuffneck Of The Day!!!’ includes pictures of famous gangsters, actors, musicians, everyday people and even a spiritual ‘guru’.