“Contemporary classical sensibility, heated flurries of flamenco, cosmic deliberations from ancient Vedic texts and a hastily admitted youthful infatuation with heavy metal… you get it all with the powerful East-West fusion ensemble led by eclectically-minded Scots classical guitarist Simon Thacker” The Scotsman 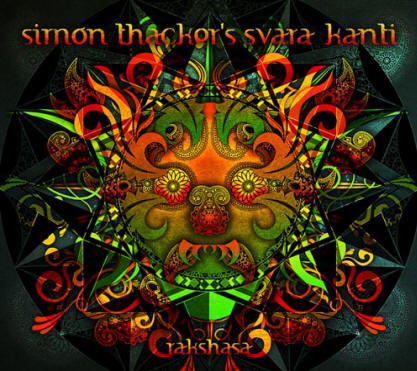 Each of the composers has a unique perspective and experience on the richness, contrasts and confluences between Western and South Asian culture. You will hear elements of the North and South Indian classical systems transformed, Punjabi folk reimagined, the immense expressive possibilities of ragas extended with Western harmonic explorations, the subversion of the customary composition/improvisation relationships in Indian and Western music, the backwards guitar recording technique pioneered by the Beatles (among others) brought to its culmination in the title track, the combining of the explosive Indian rhythmic systems with the boundless searching of cutting edge Western classical and jazz, as well as inspiration from sources as diverse as Heavy Metal, Flamenco, Blues, Indonesia and Jimi Hendrix.

Simon Thacker’s Svara-Kanti features Thacker’s unique synthesis of world traditions and contemporary innovation on the guitar with the beautiful voice of Japjit Kaur, leader/director of Britten Sinfonia Jacqueline Shave on violin and renowned tabla (Indian percussion) master Sarvar Sabri, who has a musical lineage stretching back ten generations to the Royal Court of the Mughal Emperor Akbar. Working with some of the most distinctive compositional voices of today they have created one of the most successful, wide ranging and ambitious intercultural programmes ever assembled, refreshingly listenable yet effortlessly redefining the limits of Indian/Western collaboration.

“Simon Thacker’s compositions and reworkings demonstrate his skill and sensitivity in the teeth of what amounts to a considerably complex and original journey with little precedent. His mastery of the guitar allows him to pilot the ensemble through unchartered waters with great conviction.” Edinburghguide.com