Give2Heal and Urban Asian.com proudly present “The First Annual Voice of India Charity Gala” – A night that will be full of entertainment, music, performances and more! We coordinately invite you to come and learn about the mission camps which Give2Heal and the American Society of Indian Plastic Surgeons. The ASIPS have been doing over several mission camps in India and Pakistan to help burn bridal victims. The term Bride Burning is a term, which has crossed many parts of Asian and the world and has becoming a world issue today.

The foundation will be hosting a event with music performances by three signed recording artist, Sahyba who is signed to Ray J, Sonna Rele who is signed to Motown Records with Ne-Yo and Vinita who is also signed to Meta World with Ron Artest at Artest Management. Bollywood performances by top dance groups in LA and more! Dr Munish Batra will also be in attendance to speak about the camps and the foundation. The event will be held at Tanzore in Beverly Hills, Ca. To RSVP you may go to www.urbanasian.com/rsvp – see flyer below.

Bride burning is a form of domestic violence, most common in South Asia, in which her husband or husband’s family due to his dissatisfaction kills a bride at home over the dowry provided by her family. The act is often a result of demands for more or prolonged dowry after the marriage. Kerosene is most often used as the fuel. It has been a major problem since at least 1993.

This crime has been treated as culpable homicide and, if proven, is punishable accordingly, typically up to a death sentence or life imprisonment. Bride burning has been recognized as an important public health problem in India, accounting for around 2,500 deaths per year in the country. In 1995, Time Magazine reported that dowry deaths in India increased from around 400 a year in the early 1980s to around 5,800 a year by the middle of the 1990s.   A year later, CNN ran a story saying that every year police receive more than 2,500 reports of bride burning. According to Indian National Crime Record Bureau, there were 1,948 convictions and 3,876 acquittals in dowry death cases in 2008. Today that number is still rising and many are trying to control the issue.

Bride burning is not the same as the ancient custom of Sati, formally abolished in 1829, where a widowed woman was forcibly or voluntarily placed on the burning pyre of her dead husband (usually a man in his old age) and burnt to death. 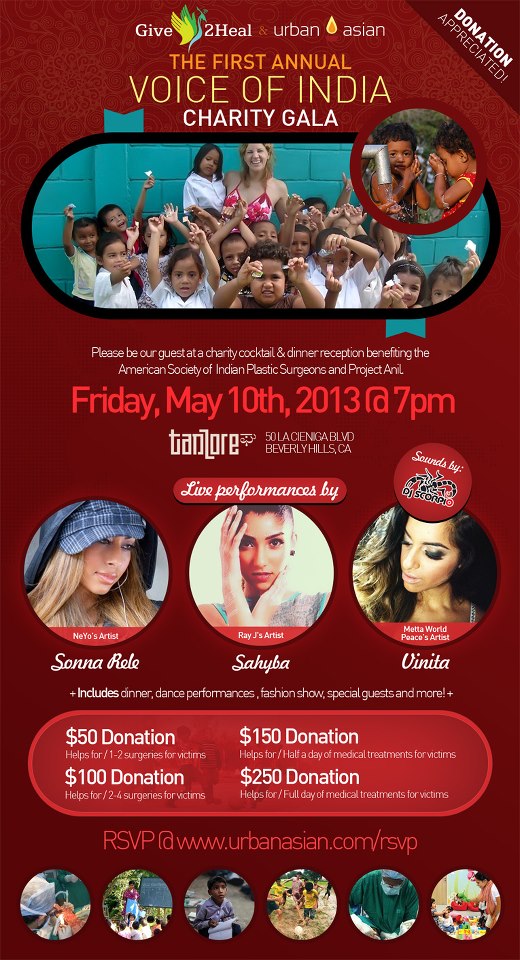 Today the Plastic Surgeons a long with the Give2Heal foundation have done several mission camps to save lives and heal women in Asia by doing plastic surgeries. The post-surgery is a very long healing process. Voice of India an event to help the wounded and the women who are burn victims that suffer from such an issue worldwide. A foundation to help H.E.A.L. H.E.A.L – Honor, Empower, Accept, Love. Check out photos on Give2Heal Fan Page.

Our mission is to serve individuals and families in the poorest communities worldwide. Drawing resources from our global networking and partnerships with corporations, sponsors and private charity gala events, to promote awareness and solutions to real life issues. Initiate global responsibility to facilitate lasting change by internationally recognizing human rights standards of the inherent dignity and of the equal and alienable rights of all the people around the world.