We knew that the  India film industry had a connection with America, Canada and London but were you shocked to know that it had a major connection with Russia? I bet you didn’t! Well then, guess again. Many films have been shot in Russia as a matter of fact and many do not know of this! Now major buzz is leading into the country by showing more Bollywood films to there audience! Sounds amazing seeing that Bollywood music and art is becoming the latest trend in Russia. Leading Integrated Indian Studio to release seven of its popular films in the Country after the success of a Deepika Padukone starrer there, including her next. Some of the films out of the lot have been distributed by them in the overseas market out of which some have been co-produced by Eros International Media Ltd.

Bollywood films often have international releases. And Russia is among the countries that have always shown interest in Hindi movies. Now, after the success of Cockail (2012), Eros is releasing seven more films Zindagi Na Milegi Dobara, Rockstar and DesiBoyz (al12011), Student of the Year, Vicky Donor and Bhoot Returns BD (all 2012) and Yeh Jawaani Hai Deewani (YJHD) in the county.

“Based on the substantial response that Cocktail generated in Kyrgyzstan and another CIS (Commonwealth of Independent States) countries, we are expecting a huge a response from the Russian market,” says Kumar Ahuja, President, Eros International.

YJHD will be the first of the lot, with the tentative Russian release dated fixed at July 4. “Dates for the other films are being worked upon. The Dubbing process will start shortly says Ahuja. A distributor from Russia, on conditions of anonymity, says, “Cocktail drew in audiences, so we are looking forward to an equally favorable response for the other releases as well. We are anticipating a huge response for Ranbir Kapoor movies like YJHD and Rockstar taking into considerations his Kapoor lineage. 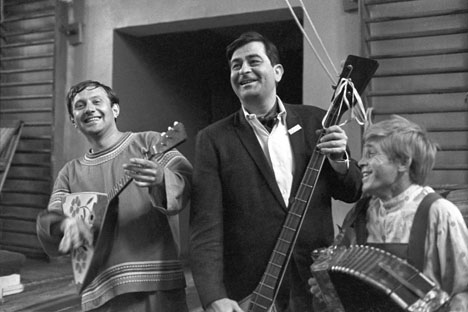 There’s also a great demand for 3D movies here, so Bhoot Returns 3D will be a film to watch out for”. Eros also plans to promote their films in Russia alongside the release. “The Actors have shown interest in promoting the films there. So we might consider sending them. The Kapoor family has enjoyed a long-standing personal and professional relationship with the Russian. So after Raj and Rishi Kapoor, it is Ranbir who is taking this tradition forward, “ says Ahuja. Now if we ever enter another country for a visit, be sure to know that your favorite Bollywood films will be playing in there theaters!