The 13th Annual New York Indian Film Festival (NYIFF) announced the lineup for their “100 Years of Indian Cinema” series presented by Incredible India! Ever since pioneer filmmaker D.G Phalke released his first feature film RAJA HARISHCHANDRA on May 3, 1913, India has continued to be the most prolific and diverse film industry in the world. To mark the global celebration of 100 years of Indian Cinema, NYIFF is featuring an exceptionally compelling array of films preceding Cannes. The lineup includes three rarely seen masterpieces from different time periods, as well as two world-premiere documentaries that explore different facets of Indian filmmaking.

These classic films will celebrate recent efforts at film restoration, which are bringing some of India’s greatest cinematic treasures to an international audience. According to Film Festival Director Aseem Chhabra, “In the recent years, many scholars, film programmers and archivists have expressed deep concerns about the state of old Indian films.” However, he notes that recently, “There have been some valiant people who have stepped forward to restore some of the films. M.S. Sathyu’s GARAM HAWA underwent a restoration and was recently screened at the International Film Festival in Goa. In its time it was hailed as a landmark must-see film and credited with being at the forefront of a new wave of art cinema. Uday Shanker’s fantasy ballet KALPANA was unveiled at Cannes last year after being restored by Martin Scorsese’s World Cinema Foundation. Kundan Shah’s JAANE BHI DO YAARO, a cult classic comedy, was restored by the National Film Development Corporation and enjoyed a theatrical release in many of India’s leading cities. NYIFF has the honor of presenting the first US screenings of all three films since their majestic new restoration in this incredible series that is fittingly sponsored by Incredible India!” 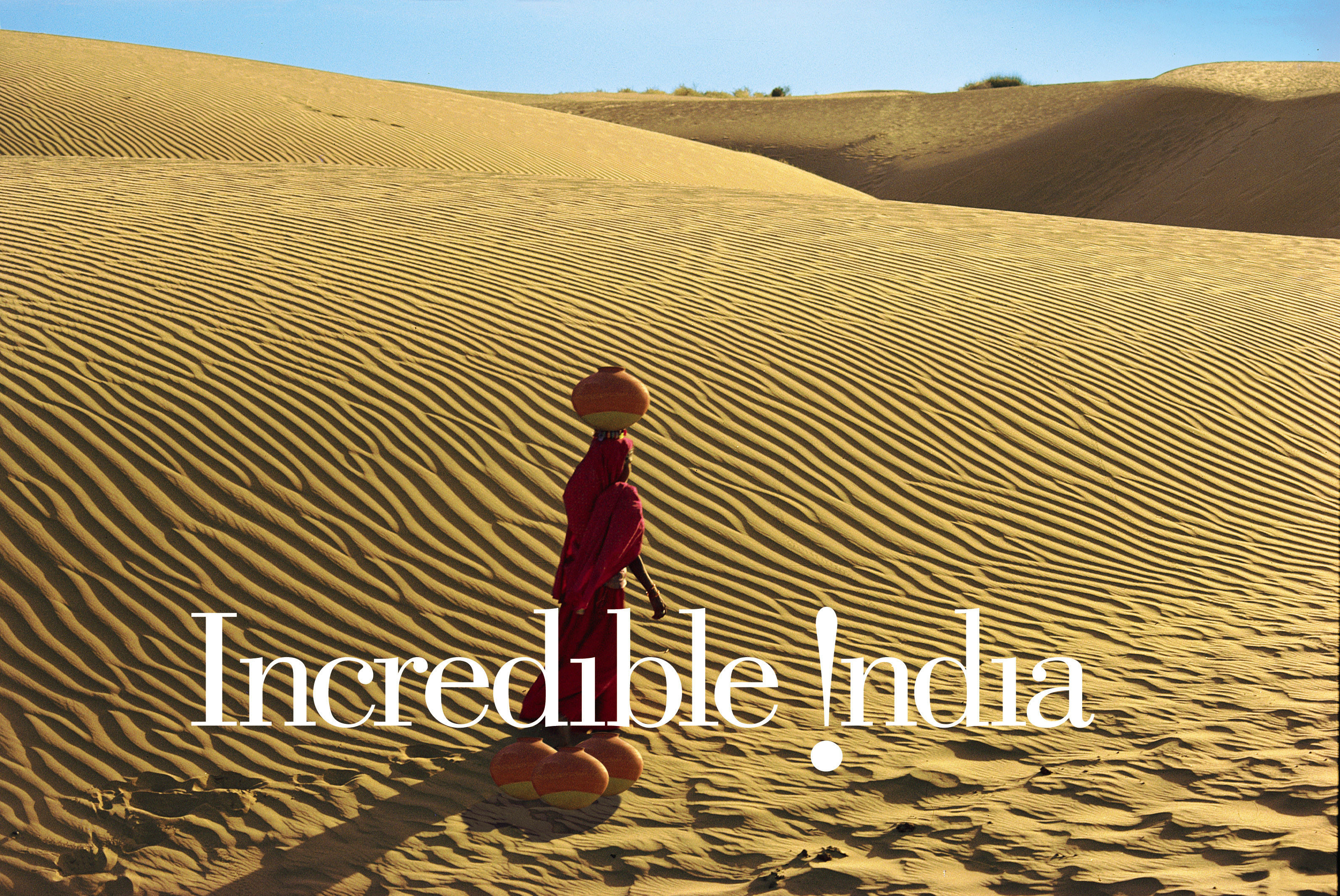 Incredible India! is of the belief that the subcontinent’s remarkable diversity is what makes it such a rewarding destination to visit.  Regional Director, Sujata Thakur states, “As a home to Indian Cinema, we are happy to present and celebrate 100 years of Indian Cinema at NYIFF 2013.”

The documentaries offer a modern retrospective on the Indian filmmaking industry. Jaideep Varma’s BAAVRA MANN follows the life and career of Sudhir Misra, a remarkable Hindi independent filmmaker whose influence can be seen in a generation of independent filmmakers today. Rudradeep Bhattacharjee’s THE HUMAN FACTOR draws from rare archival footage to explore how music composers and other musicians have crafted the sound behind some of Hindi film’s most iconic songs.

In celebrating a century of Indian film, Festival Founder Aroon Shivdasani says, “We will screen critically acclaimed, award winning, recently restored masterpieces from the history of Indian cinema, juxtaposed with today’s young, emerging, globally aware, socially conscious films. I do believe it will be fascinating to compare the two sensibilities in filmmaking, subject matter, performance styles and all the other nuances of traditional films versus those pushing boundaries.” Festival Director Aseem Chhabra adds, “Together these five films will give New York audience a taste of Indian films and what makes our cinema so unique.” 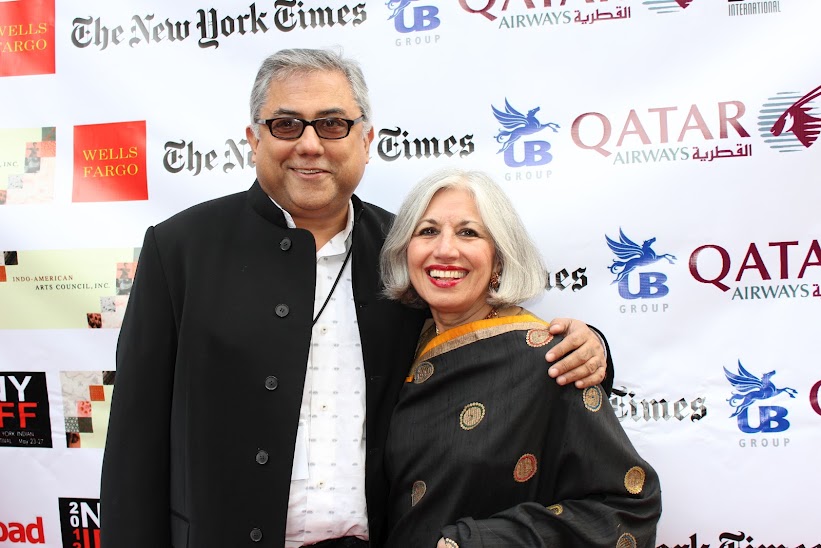 NYIFF runs from April 30 – May 4 at prestigious venues across New York City. NYIFF’s “100 Years” series will screen exclusively at Tribeca Cinemas. The following are the films featured in the 2013 New York Indian Film Festival “100 Years” series:

This documentary investigates song and music in the context of the Indian filmic experience. Although singers, music directors, the lyricists are all publicly celebrated for their work and have attained almost legendary status in popular culture, many unseen – and uncredited – musicians make up the orchestras that played on those songs and the background scores. The Human Factor focuses closely in on the story of the Lords, a family of Parsi musicians whose contribution to Hindi film music parallels that of any of the great music directors or singers, yet is widely unknown. But the story of the Lords is not theirs alone, but represents thousands of other composers. This documentary is crucial to providing an obscure chapter in the history of Indian cinema, replete with rare archival material, which provides viewers with a subaltern history of Bollywood. 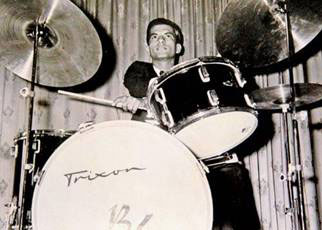 This documentary zooms in on the personal and professional life of Sudhi Mishra, one of Mumbai cinema’s longest lasting and relevant filmmakers, using his life as a lens to explore declining cultural life in India. 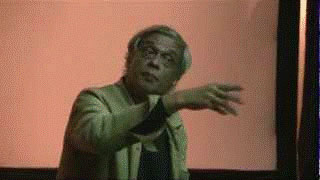 Professional photographers Vinod Chopra and Sudhir Mishra open a photo studio in the prestigious Hajj Ali area in Mumbai, in the hopes of making enough money to sustain themselves. After a disastrous start, they are given some work by the editor of “Khabardar,” a publication that exposes the scandalous lives of the rich and the famous. They accept it and start working with the editor, Shobha Sen, on a story to expose the dealings between an unscrupulous builder, Tarneja, and corrupt Municipal Commissioner D’Mello. While working on their story, Sudhir and Vinod decide to enter a photography contest, taking photos all over the city. On developing their pictures, they notice a man shooting someone, and get caught up in a murder case that ends with them in prison. In the final scene, Vinod and Sudhir are shown several years later being released, still in their prison clothes. They turn to the camera and make a cut-throat gesture, signifying the death of justice and truth in an age of corruption. 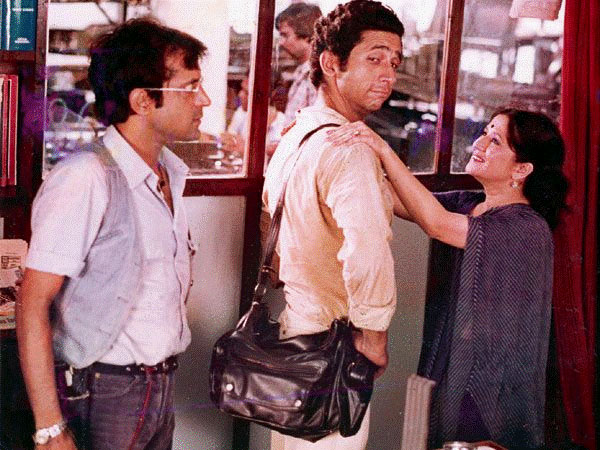 Based on an unpublished Urdu short story by Ismat Chughtai and adapted for screen by Kaifi Azmi, who also wrote its lyrics, this film is deals with the plight of a North Indian Muslim family, in the post-partition India of 1947, as the film’s protagonist grapples with the dilemma of moving to Pakistan or not. The Mirzas, a Muslim family living in a large ancestral house and running a shoe manufacturing business in the city of Agra in the United Provinces of northern India (now Uttar Pradesh) is headed by two brothers; Salim, who guides the family business, and his elder brother Halim, who is engaged in politics and acts as a major leader in the provincial branch of the All India Muslim League, which led the demand for the creation of a separate Muslim state of Pakistan. 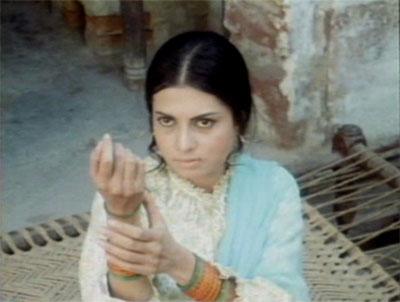 Part soap opera, ballet, and political treatise, Kalpana blends surrealism with the high art of Indian classical dance to tell a story loosely based on director Uday Shankar’s own experiences trying to found a dance academy. The film opens with an earnest film director who pitches a screenplay to the owner of a production company. The producer rebuffs the director, claiming he is only interested in films that will net the highest possible box office rather than works with cultural integrity. The director begs him to at least hear him out, and thus the story of Kalpana begins to unfold. Kalpana centers on Udayan, a boy who, despite a difficult childhood, becomes a great dancer. Udayan dreams of opening a dance academy, but must overcome a series of professional challenges, including a crooked theatre promoter, and navigate the competing affections of two women, Uma and Kamini. Dance is used as the primary tool of expression throughout the film, lending Kalpana a unique style that is still unrivaled in Indian cinema. 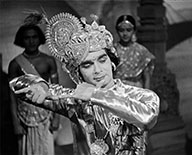 For Membership and Tickets –

Celebrating its 13th year, NYIFF will run April 30 to May 4. Memberships may be purchased athttp://www.iaac.us/Contribution.htm

Festival Passes and Individual Tickets go on sale in April at the festival’s website: www.iaac.us/NYIFF2013.