Chashme Baddoor is creating a buzz all across the digital and offline space. Many fans have found an instant connect with the film thanks to the quirky tagline, fun dialogues and a glimpse of the 90’s David Dhawan. The scooter of course only adds to the eccentricity of the Chashme Baddoor poster; Taking this one step forward, the team, has launched a scooter run app on their official Facebook page. The film is all set to release on April 5th, 2013! Many films are creating ways to interact with fans and build games so that viewers are able to still engage with the film made. New ways of how technology and apps reach social media and films are being created! Do you think that these games are useful and would you use it?

The entire objective of the Scooter Run game is to ride and avoid the obstacles in your path. The more distance you cover, the faster your bike goes. The game, of course, is an instant hit as people have not only played it but have also challenged their friends, with each trying to outdo the other. The game is bright, quirky and takes the fun element a step ahead. 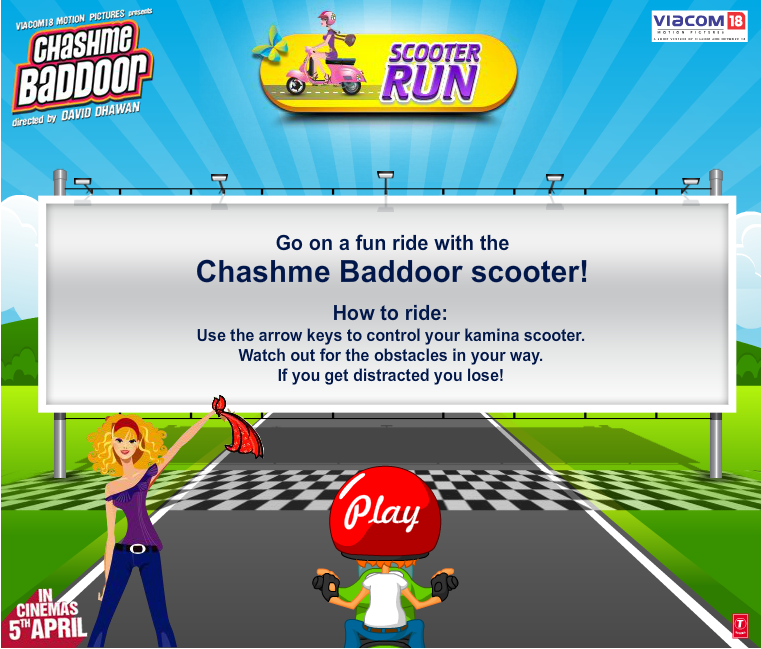 With just one day left the online platforms are buzzing with activities conducted by the Chashme Baddoor team. Romance, comedy, David Dhawan ka tadka – perfect ingredients for a hit film, we’d say. Be sure to check out the film which hits worldwide this Friday!

Audiences can play the game online!