It’s been a while since we have seen Bollywood beauty, Ameesha Patel, grace the screen.  Ameesha shot to fame with her highly acclaimed debut in Kaho Naa Pyaar Hai in 2000, opposite fellow debutant Hrithik Roshan.  She followed this film up Gadar: Ek Prem Katha opposite Sunny Deol in 2001.  She had a few average movies in the early 2000s before she relegated herself to some side roles or brief appearances.  Many blamed this on the rocky relationship between her and Vikram Bhatt.  However, that relationship has been over for a few years now, and Ameesha is ready to return to Bollywood.

Now, she is ready to reclaim her position in Bollywood not only as a leading lady, but also as a producer.  In 2011, Ameesha launched her production company – Ameesha Patel Productions – with her friend and business partner Kuunal Goomer.  She has several movies underway and in pre-production. Of these, the first to be promoted is “Desi Magic,” which will be her maiden production.  The film is being directed by ad filmmaker Mehul Atha, while the screenplay has been penned by director Sanjay Gadhvi (of ‘Dhoom’ fame).   The movie’s also stars Zayed Khan and Randhir Kapoor. 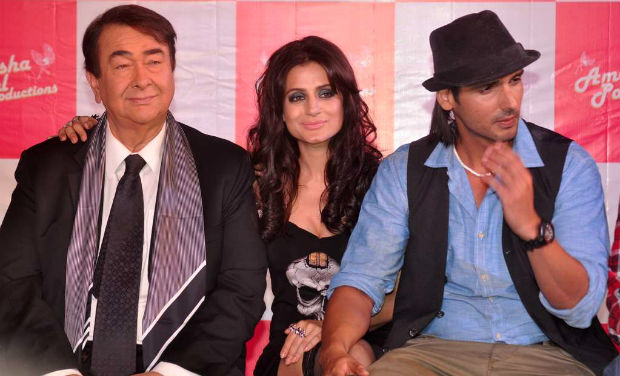 Hoping to bet some luck from hits of the past, Ameesha Patel will be dancing to the classic Madhuri Dixit dance number “Ek Do Teen” from Tezaab.  This original number was choreographed by Saroj Khan (see our interview here).  However, the new version will be choreographed by Raju Khan, who just happens to be Saroj Khan’s son.

“…just the way Madhuri created the magic, I hope me and my choreographer Raju Khan create the (same) magic.”

“I am really looking forward to the ‘Desi Magic’ and as you all have seen my mom do ‘Ek do teen’. It’s kind of killing me already. But my fingers are crossed and I hope we create magic (again) on that.”

When reporters asked about including an item number in the film, Ameesha said:

“We have ‘Ek do teen’ with us, so we have all the items possible. At the end of the day, the winner is the subject. Content is the king. No hero, no heroine can make your film work if your film lacks the content.”

We wish Ameesha the best for her debut, and of course, you can follow all the latest news about the film here on UrbanAsian!