“After releasing a series of cameos and singles which we’ve featured here on Urban Asian, Ajaxxx blesses us with his fourth mixtape release, “He’s a Monster!” The 20-track compilation mixtape features a slew of artists from the US, UK, and Canada.”

Ajaxxx is a South Asian-American hip-hop artist hailing from Orlando, Florida. Defining his style as a blend of catchy lyrics mixed with intricate wordplay, he has released several mixtapes, been featured in international press, and won various competitions. Now Ajaxxx has a new mixtape release– “He’s a Monster!”

“I’m just trying to represent,” says Ajaxxx. “For my culture, for my city, and for my people. To me, it’s all about making music that people can feel.”

Here is a personal message from Ajaxxx:

“It’s incredible. After years, after an insane amount of recording and mixing, and after reviving a computer that was almost gone, I’m finally back with a brand new mixtape. If I told you I was excited, it would be an understatement.  That’s right, my newest release is FINALLY here: “He’s a Monster!“. I wanted the new mixtape to be a collection of songs I’ve done over the last few years, combined with some new songs and unreleased tracks too. Basically, I just wanted to show people that ‘yo, he’s a monster’ LoL. The mixtape is completely and absolutely FREE. So what’re you waiting for? Get to downloading!  And by the way, this is a fan list exclusive. So that means only those that are on this mailing list get this CD. Consider this my way of saying thank you.” 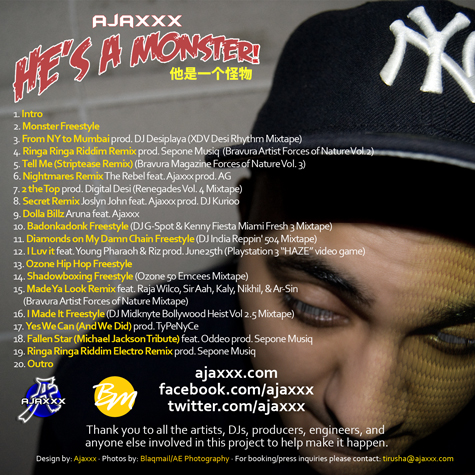 “Download the CD for FREE by signing up for Ajaxxx’s mailing list here: http://ajaxxx.fanbridge.com and be sure to keep it locked on Urban Asian for more updates!”