Fans of superstar Akshay Kumar are set for a cinematic treat as the ever popular actor moves away from his more usual comedy-action personas to portray a villainous and cunning thief, who leads a pack of “26” hardened criminals in a daring jewelry heist, which sent shockwaves across India. 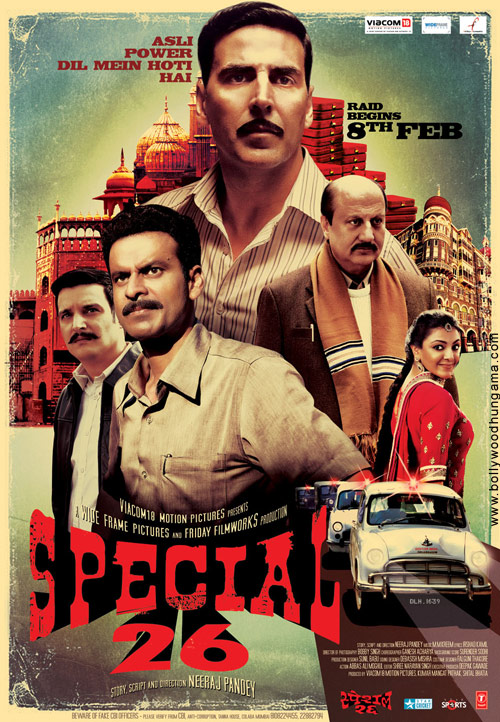 Special Chabbis is a cleverly scripted and observed gritty drama film, which is based on the real-life events of the infamous Mumbai daylight raid of 19th March 1987 in which an unknown conman posed as CBI officer ‘Mon Singh’ to recruit a band of 26 impostor income tax officials to carry out an audacious robbery on the Opera House branch of Tribhovandas Bhimji Zaveri in Mumbai, disappearing with precious jewellery worth Lakhs.

Besides Kumar, the movie boasts an esteemed supporting cast, which includes Manoj Bajpai (Gangs of Wasseypur, Satya, Veer Zaara), Jimmy Shergill (My Name Is Khan), Anupam Kher (The Silver Lining Playbook, Bend It Like Beckham) and relative newcomer to Hindi cinema and the only female protagonist in the film Kajal Aggarwal (Singham).

Neeraj Pandey seemed to hit gold with his casting of Kumar as he was his preferred choice to play the lead in Special Chabbis, with Pandey telling The Times of India:

“We were clear he’d be the best choice. So breaking the kind of image Akshay has, as an actor, was the trigger. I’m doing ‘mind action’… something I’ve never done before. The film shows how this guy’s mind worked.  Akshay’s got an ability to listen, which is a rarity. Here, people are talking all the time. He has an immense sense of discipline. Working with him is special.”

Man of the moment Akshay Kumar enjoyed a tremendous 2012, with four of his films entering the much-sought after international 100 Crore club, taking a massive 400 Crores at the Indian box office alone and doing well internationally too!  Based on the storyline for Special Chabbis Kumar is sure to confirm that Singh is indeed King in 2013 too!