As 2010 comes to an end, we here at UrbanAsian are taking a look back at the year to review what was hot (and what was not).  Bollywood, like every year, churned out several films.  Let’s take a look at the hits and misses of the year. 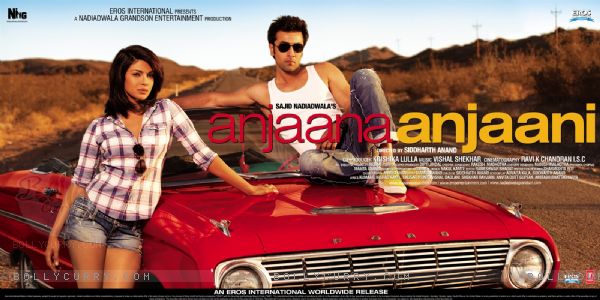 It seems that these days, Priyanka Chopra and Ranbir Kapoor can do no wrong.  Earlier in the year, in August, fans finally got to see both hotties share the screen together in this  Siddharth Anand movie.  Ranbir Kapoor and Priyanka Chopra sizzled on screen and their on-screen chemistry reminded me of Shahid Kapoor and Kareena Kapoor’s in Jab We Met.  The movie was cleanly made and featured a catchy soundtrack.  We can’t rank it higher due to its average collections at the box office, but it ranks at number 10 on our list because who can resist the young RK on screen? 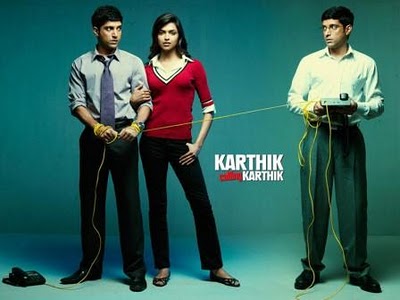 We now turn our attention to Karthik Calling Karthik.  This thriller may have been one of the surprises of 2010 with the pairing of Deepika Padukone and Farhan Akthar.  This isn’t Bollywood’s first attempt at dealing with the issue of schizophrenia and split personality, but it’s the first time it finally hit the mark.  Earlier Ajay Devgan played a schizophrenic in Deewangee, but despite an awesome soundtrack, the movie fizzled at the box office.  Similarly, this year, Abhishek played a character with a split personality in Raavan without success.  Karthik Calling Karthik, can’t be deemed a box office blockbuster, but though it wasn’t the biggest hit of the year in terms of collections, I was impressed by the writing and acting talents in the film enough to give it a place on the Top 10. 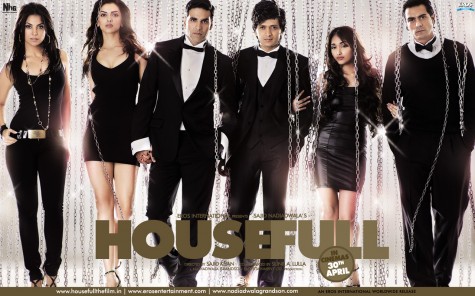 Comedies in 2010 seemed to click with the audience. The movie, directed by Sajid Khan, was a crazy storyline with, Sajid fav, Akshay Kumar, who played a man thinking himself to be a jinx on others.  The star studded cast included Deepika Padukone, Ritesh Deshmukh, Arjun Rampal, Jia Khan, Lara Dutta, among several others.  The soundtrack immediately became a big hit in 2010 with the track “Dhanno” topping charts around the country.  Though I personally did not like the movie (and most critics too did not like it) it’s box office collections are impossible to gloss over.  The movie gave Akshay Kumar his biggest opening to day (ahead of Singh is Kingg), it’s opening weekend (Rs 31 crore) was the second-highest weekend collection of all time (behind 3 Idiots), and by the end of the week, the movie had collected 49.8 crore, making it the third-highest first week collection (3 Idiots and Ghajini topping it).  Not bad huh?  In fact, this movie was the 5th highest grosser of 2010.

#7 Once Upon a Time in Mumbaai 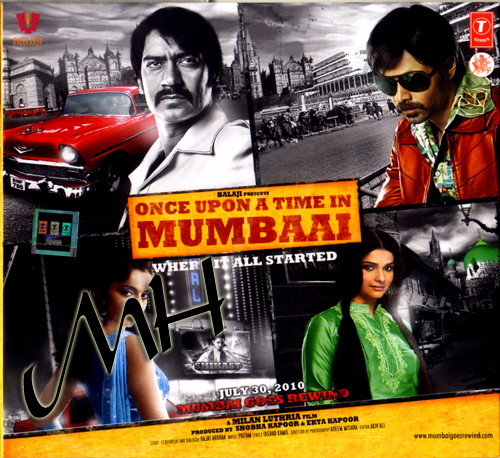 Once Upon a Time in Mumbaai was the 6th highest grosser of the year.  Though scoring less than Housefull with the cash, the movie deserves a higher place on the countdown for the mature performances of its cast.  The movie uniquely merged stories of a gangster from the past and present and how their paths parallel each other.  The movie starred Ajay Devgan and Emraan Hashmi as the male leads with Kagana Renaut and Prachi Desai as the female leads.  The plot seems to reflect the lives of real life terrorists, Haji Mastan (Devgan’s character) and Dawood Ibrahim (Hashmi’s character), but the way it was done kept the audience intrigued. 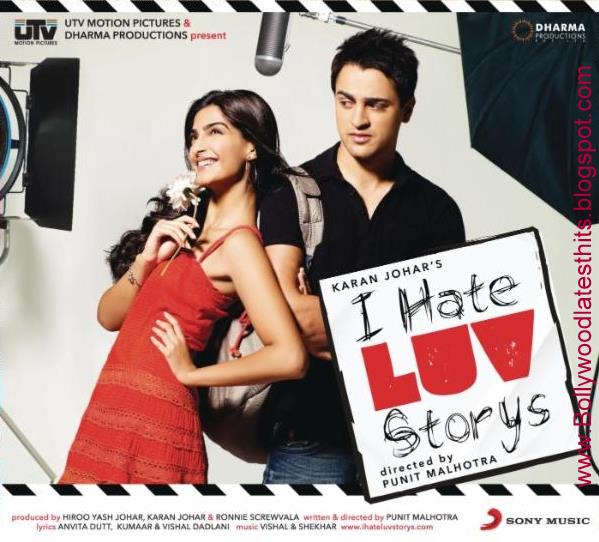 I Hate Luv Storys was a cute romantic comedy that made waves in 2010 with the pairing of hunk Imraan Khan (Aamir Khan’s nephew) and sexy Sonam Kapoor (Anil Kapoor’s daughter).  The movie received mixed reviews (more positive than negative), but the lead pairs acting was greatly praised.  The movie ranks at 6th in our countdown for this sizzling new on screen pair, it’s romantic soundtrack, and for Dharma Productions finally switching things up with a new pair in its movies besides SRK-Kajol.  Plus, UA is all about the youth vibe, so we’re excited to see the youth crowd have a movie dedicated to them. 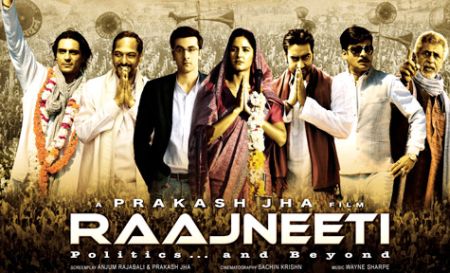 Raajneeti was the most anticipated movie of the year, and it definitely did not let viewers down.  From beginning to end, the movie took viewers on a journey into the world of Indian politics – from their personal lives, public lives, and beyond.  The entire star cast performed well.  Ranbir Kapoor was finally able to showcase his acting skills beyond that of a romantic hero.  Katrina Kaif also showed a new dimension… actually, in her case, she finally showed a dimension!  Arjun Rampal, also in the film, added to his acting repertoire and has definitely established himself as a good actor.  Ajay Devgan and Nana Patekar, as expected, performed well.  Raajneeti quickly rose to the top of the charts and acquired Blockbuster status, becoming the 3rd highest grosser of the year and 5th highest grossing film at the Indian box office. 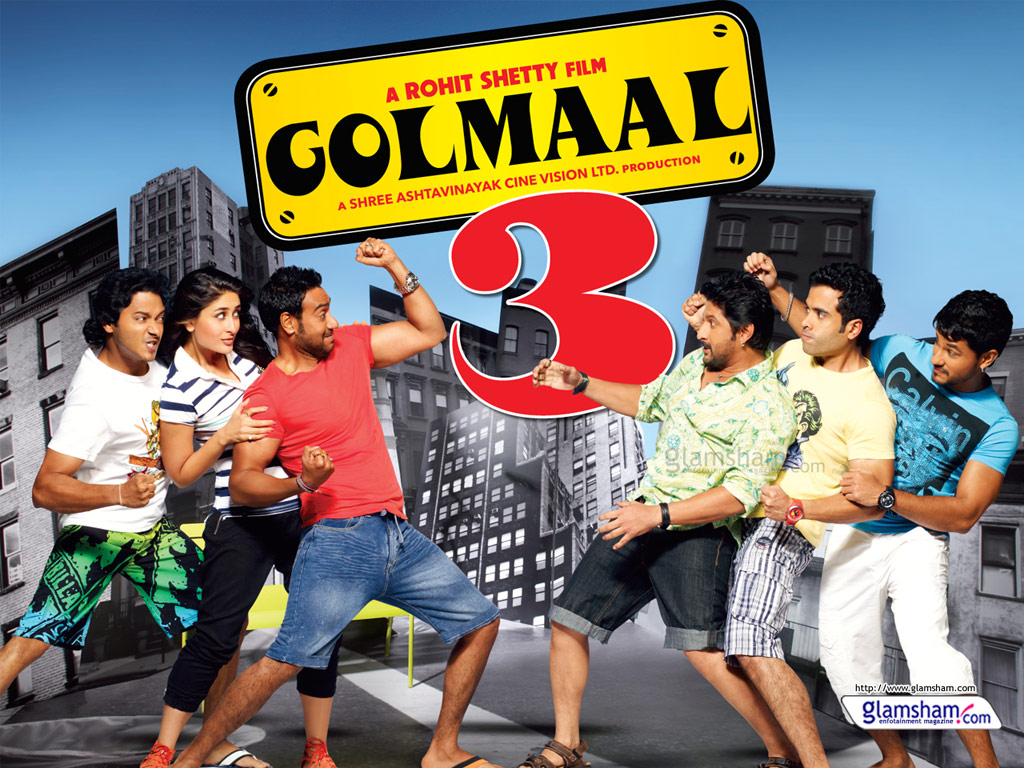 The highly successful Golmaal series continued it’s success with the 3rd installment of the series and became the 2nd highest grosser of the year (2010) and 4th highest grossing Bollywood movie of all time. Most of the actors from the previous films reprised their roles including Ajay Devgan, Kareena Kapoor, Arshad Warsi, Tusshar Kapoor and Shreyas Talpade.  New additions included Mithun Chakraborty and Kunal Khemu. The movie only made it to the 4th spot in our list because it didn’t receive as much universal success as the films higher up in our countdown.  Plus, as with most trilogies, the further in you go the more repetition occurs and monotony quickly sets in.  The movie paled compared to it’s earlier installments, but we could not ignore the trends it set in India. 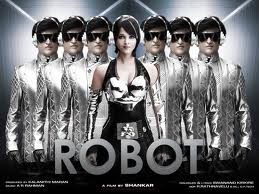 Really there is only 1 word necessary here – Rajnikant – but I’ll quickly explain why Robot beat out others on the list.  The movie was a huge success in South India, featured a unique concept, interesting pairing of superstar Rajnikant with Aishwarya Rai, and was an ambitious venture with interesting special effects.  For those of you who love the numbers here’s a quick comparison – In the first 3 days, Robot earned about Rs. 50 crores in, while Anjaana Anjaani which was released at the same time made less than Rs. 25 crores.  Internationally, Robot may be the biggest success story of the year as it reached 3 million dollars collectively in the USA, Canada, UK, France, Singapore and Malaysia.  Anjaana Anjaani grossed a mere 517 thousand dollars in the same time span. 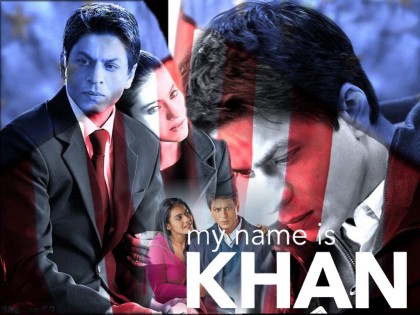 Shahrukh Khan has always been popular abroad, and this fact was reinforced with the success of My Name is Khan.  Shahrukh played a Muslim man with Asperger’s syndrome whose life changes post-9/11.  In recent times, SRK’s performances had become bland and repetitive, but this movie allowed him to prove to all why he’s still king.  The movie saw the reunion of the hot Shahrukh Khan – Kajol pairing.  It became the 4th highest grossing movie of the year in India.  The film broke many other box office records.  In India, the film opened with an enormous INR 295 million (US$ 6,356,688), becoming the third-highest weekend net for a Bollywood film (behind 3 Idiots and Ghajini). Overseas, it ranked as the highest-grossing Bollywood film with Rs. 110.34 crores ($19.25 mil).   Within four weeks, the film crossed the INR 700 million mark in India and became the first film of 2010 to do so.  In the US, it was the highest grossing Bollywood film of the year (US $4,018,771).  The movie is still playing on-demand in the US in certain parts of the country. 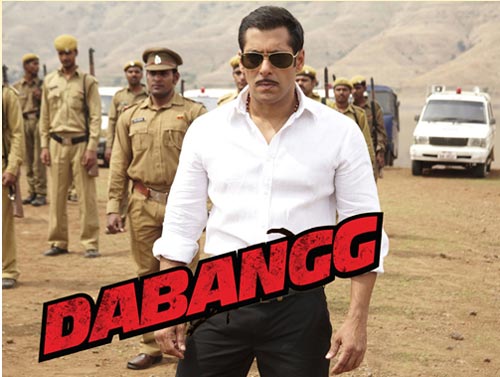 There is no denying that the biggest blockbuster of the year was Salman Khan‘s Dabangg. The movie was the surprise hit of the year!  Salman Khan, typically seen in comedies, buckled down and showed strong acting skills as a Robin Hood-type character.  The only word to encapsulate this movie (from the soundtrack to the scenes) is success!  The item song “Munni Badnaam” pictured on Malaika Arora Khan became one of the hottest tracks to come out of Bollywood in recent times (let alone 2010).  The movie itself succeeded due to Salman Khan‘s charm and ability to connect to the audience proving that Salman is the last great action hero of Bollywood.

In India, the film opened to an overwhelming response at the box office with single screens at 100% occupancy and multiplexes at 80-100% occupancy, and became the highest grosser of 2010 (Rs. 140,10,00,000) and achieved the highest weekend-grosser – surpassing the record set by 3 Idiots.  In only the 2nd week of its release, Dabangg surpassed the lifetime record collections of 2008’s super hit Ghajini to became the second highest grossing film of all time (behind 3 Idiots). 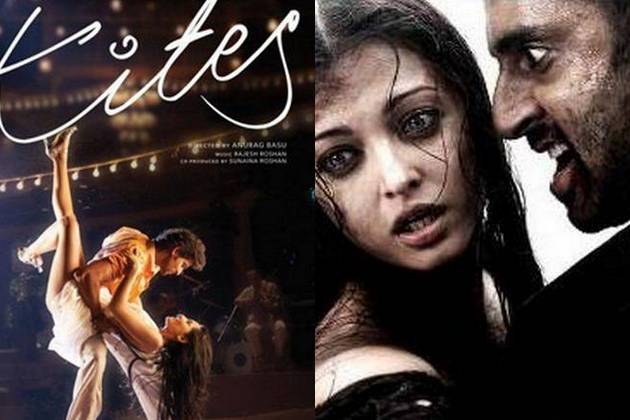 Perhaps the biggest let downs of 2010 were Kites and Raavan.  Though I enjoyed Raavan myself, Kites was unnecessarily violent.  I agree with critics that the chemistry between Hrithik Roshan and Barbari Mori was strong.  However this one fact could not save a weak script, and so, Kites remained grounded (at least in India).  Here in the states, it became the first movie to break into the weekend Top #10.  However, high expectations for the film prevented it from achieving success.

Raavan, like Kites, was an overly ambitious project.  Despite having the Brangelina of Bollywood Abhishek Bachchan and Aishwarya Rai in the film, the movie wasn’t able to get ahead (pun intended).

Do you agree with the ranking readers?  Let us know!