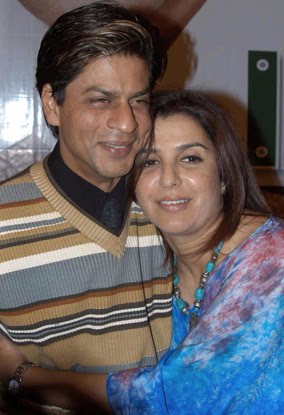 Farah Khan’s the latest Khan in Bollywood to be feuding with actor Shahrukh Khan.   The latest buzz in B-Town is that former best friends, Farah Khan and Shahrukh Khan, have been on very poor terms as of late.

Rumor has it that Shahrukh was extremely offended when Farah opted to cast Akshay Kumar in her latest film – “Tees Maar Khan” – as opposed to Shahrukh.  The female lead in the flick is “Katrina Kaif,” and you gotta admit, Kat makes a better on screen pair with Akshay!  Definitely agree with Farah’s choice for the lead pair (sorry SRK!)

Apparently, Shahrukh was so upset by Farah having chosen Akshay over him, that he’s been coaxing Eros Entertainment to release their upcoming Ajay Devgan starrer “Toonpur Ka Superhero” on the same day as Farah’s release – Dec 24th.  Looks like Shahrukh really wants to show Farah he’s pissed off!

In this case, gotta say that Shahrukh needs to stop begin a baby!  Directors should pick a pair they think is suited to the movie!  That’s why in Hollywood even top stars screen test for roles!  Good for Farah that she went with her instinct and cast Kat and Akki.

What do you all think readers, will “Tees Maar Khan” succeed without Shahrukh being in the movie?!  Let us know your thoughts!