There are some artists that come on the scene and you instantly know that they will have longevity and success as an artist. UK artist, Shivali, is one such artist.  There is magic in her voice and soul in her sound.  Not to mention, she’s very humble.

As we’ve brought to your attention earlier, Shivali is a London-based artist who was discovered and subsequently signed to Sony Music India.  She is all set to release her new album “The Bhajan Project.”  The album does not entail your typical bhajan sound, and when you hear it, you may just become a fan of this otherwise neglected genre.   I had a chance to talk to Shivali about her album and future plans.  Read on for the full interview. 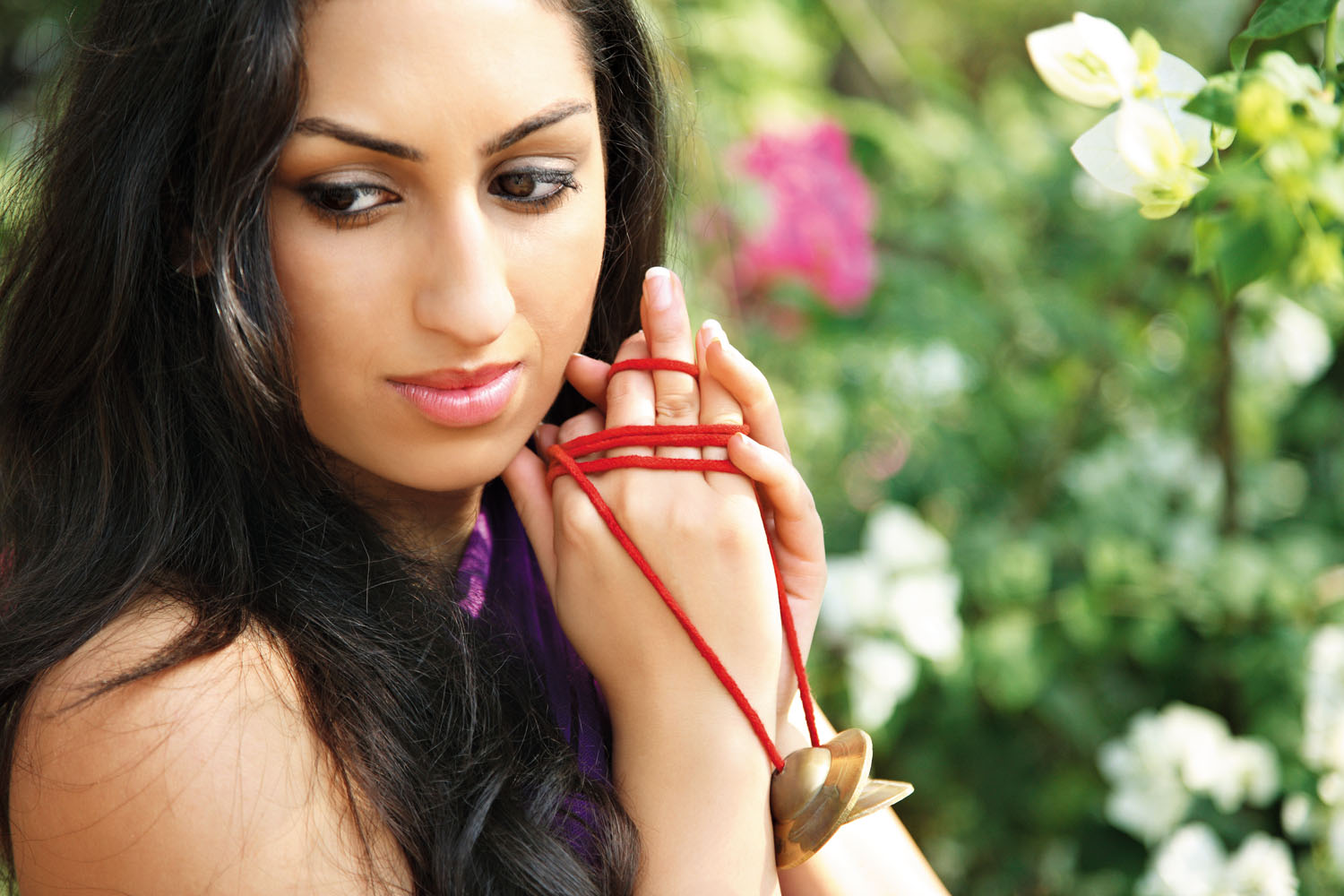 UA: Bhajan/devotional music is a genre of music that is often neglected by people from the younger generation. However, the genre seems to be a wonderful fit for your soulful voice. What got you interested in singing bhajans at such a young age and are you surprised at the positive response you’ve gotten for singing in this genre?

Thank you first for the compliments, sound is in the ears of the beholder haha. My interest in bhajans spurred from a love for my Lord which was cultivated at a very young age. It was just part of my ‘swabhava’ (nature) to have that prema (higher form of love) for God and through His blessings I learnt to express it through singing. It just seemed natural to me that if I were to sing anything it had to be bhajans.

I wouldn’t say I am surprised because my producer/best friend Arjun and I made this album with a lot of love respect and commitment which embodied the bond we have so hopefully people would feel that within the music and connect with it straight away. Of course, the album was a gift to my Beloved above, so any praise or positive response I get I am very humbled by and appreciative of.

UA: Your family must have been thrilled to discover your talent. Many artists come from a music background. Is there anyone else in the family with such raw talent? Did you major in music as an undergrad and/or are you formally trained?

I am not sure if my family were ‘thrilled’, given I gave up my job within the financial markets however when they did get hold of the album they were then very very pleased. There is no one really musical, per se, though bhajan singing is very common in my family.  A lot of us can hold a note and my mother used to do sitar performances at the Bharti Vidya Bhavan. I had formal English vocal training and then while I was recording my album and took two months of Indian vocals just to make sure I got the pronunciation correct.

UA: I’ve listened to several tracks from your album (“The Bhajan Project”) and was surprised at how seamlessly you were able to remake the bhajans to incorporate hip hop and r & b beats. Bhajans I’ve heard before all have a fairly slow beat and limited instrumentation (tabla, hand cymbals, harmonium). Why did you choose to deviate from the typical bhajan sound?

Well, you have answered the question yourself, it is because you have already heard the other versions – I wanted something new and enticing to the musical palate. The message I was trying to give is that being devotional, religious, spiritual or into God is not something old fashioned or that you have to separate from your everyday life. We often have a time for prayer and then have a time for everything else which is fine. But it is my humble belief that devotion should be woven into every aspect of our life, our beliefs should be reflected in our friendships, in our work and even our pastimes.  The songs should give this message because yes they are devotional in terms of words but in terms of production they are very modern which is the way our lives are.

The other reason is that many people feel they cannot connect with bhajans especially those who do not understand Hindu nor have particular faith. If they can just enjoy my bhajans for the music then automatically those positive vibrations will spread no matter what they believe, after all God is for everyone!

Finally, because we have such wonderful bollywood music, such great western music like jazz, hip hop, soul etc.. and why is none of this used to produce Bhajans? Who says God only wants a harmonium and a tabla? Lets give Him all instruments, in fact lets make for Him the best produced song we can!

UA: The songs on “The Bhajan Project” have a very modern feel, something that you could easily play in the car, at the gym, or jam to at any time of the day! With this much-needed upgrade to bhajans, do you think you will be able to connect with an otherwise untapped youth audience? Do you think the older generation will also appreciate the upgrade?

I think I have already answered the first part, you know it is funny, someone messaged me saying they had bought my album and they were having a tough time in life and didn’t have much faith but hearing modern bhajans made them more interested in religion again – I was ecstatic to hear that, exactly what I was trying to do.

A lot of the older generation like it, they are very supportive, they understand that it has been made out of love so they don’t knock it because it is different.  In fact, they embrace the idea that someone young is trying to do something. Also, I don’t think it is too hardcore in terms of hip hop or urban beats that it compromises the soulful elements, as we know the soul never ages, so as long as there is soul in the music it’ll be for everyone.

UA: Your sound/voice reminds me of the equally talented Enya who also sings spiritual music. Despite being Irish, she was able to breakthrough into the US market. Have you thought about working with her on an album or single? I’m sure the track(s) would be extremely popular.

Enya has a lot of subtle depth to her voice and especially the piano songs are beautiful. I would love to one day, would be an interesting collaboration.

UA: One track that would be amazing to hear in your voice is “Jyoti Kalash Chhalke” by Lata Mangeshkar – a devotional piece pictured on Meena Kumari back in the day. Which artists (both western and Indian) have inspired you?

That is a lovely track. I’ll try and start learning it for you now. A problem with a lot of these tracks is then getting the rights for them to keep on an album, but you are right it is a nice bhajan I have taken note of it.

Artists Indian has to be Vikram Hazra the bhajan singer for Art of Living, he is incredible! In fact when he even touches the Mic to open his satsang (devotional evening) with a Ganesh prayer (opening prayer) I have tears in my eyes. He literally will cleanse you… Also, Anoushkar Shankar for her sitar skills and production, again very earthy.

In terms of Western, has to be Lauryn Hill with her ‘Miseducation’ album, one of the best albums in my opinion to ever be made in terms of music and lyrics. If you pay attention a lot of her songs are very philosophical and some of the Christian, they are just fantastic! Also NERD (Pharell Williams and co), I am a big lover of hip hop and the way they use instruments and sounds just blows your mind.

Are you asking out of my album?? That’s not fair they all are my favorite 🙂 out of my album I would say ‘Prabhu ji’ track 4, I find whether you are upset or happy it just really suits you and molds to your mood. The guitar is beautiful in that track as well.

In general, I don’t have a favorite song, perhaps ‘Tell Him’ number 15 on the Miseducation of Lauryn Hill album which starts with the lyrics, ‘let me patient, let me be kind, make me unselfish, without being blind.’

UA: Your voice is well-suited to any genre. So, do you think future albums will see you focus solely on bhajans or do you think you might release an album focused on another genre, at some point, just to switch things up?

At the moment my heart is firmly placed in the hands of Bhajans, there are so many new ones yet to explore. I really want at least two more albums. On the side I would not mind experimenting or featuring in other genres for fun if the opportunity arises.

UA: Will you be releasing any more videos from “The Bhajan Project” and, if so, can you preview for our readers which songs they will be for (or should I bribe you with candy to get the scoop hehe)?

Haha hmmm… yes we maybe, all I can say is.. it’s one of the faster tracks towards the end of the album!

UA: Is there anything else you want to add/say to your fans and readers of UrbanAsian? Thank you for taking the time to do the interview and sharing your unique music with us.

Thank you for reading! Hope you enjoyed! And give me a shout on Facebook or Twitter (@shivaliartist) if you like dislike or anything else to do with the Bhajan Project! Thanks for having me, it’s been a pleasure.