The multilingual duo, Maz and Ziggy are singers, songwriters, rappers and composers, blending English, Punjabi and Hindi music in their own unique way, bring to you “Jeevay Pakistan” a tribute to Pakistan Flood Victims. The victims need your help to get back on their feet, to build their homes and lifes again, please help them by donating  just £0.79 to charity via iTunes and recieve a gift of “Jeevay Pakistan” the tribute as a thank you for helping the needy.

The video has already received unprecedented support with a commitment from TV channels including B4U, Brit Asia, Colours, Dunya TV, Imagine Dil Se, MATV, Music India, NTV, Prime TV and Star Plus to give it maximum airplay in order to help reach the €200,000 target.

The song is produced by Kam Frantic, who has previously worked with the likes of Kumar Sanu, Asha Bhosle, Miss Pooja, Rahat Fateh Ali Khan and Malkit Singh. Written and composed by both Maz and Ziggy and recorded in their good friend, Hunterz’ studio, ‘Jeevay Pakistan’ is a track that will undoubtedly connect the Pakistani community in the UK with their homeland and help them remember their roots.

Lebara Mobile, the leading provider of international mobile services and Manchester based musicians Bonafide, announced a partnership aimed at helping the people of Pakistan rebuild their lives following the devastating floods earlier this year. Lebara Mobile’s vision is to be the leader in providing low-cost, high quality international mobile services. Lebara Mobile was founded in 2001 as part of the Lebara Group. Lebara was ranked as the UK’s fourth fastest-growing private company in the Sunday Times ‘Fast Track 100 listing’ in 2006, was voted Best Newcomer at the Mobile Industry Awards in 2008, was recognised as delivering the Most Innovative Service at the 2009 Mobile News Awards, and in 2010 won the award for best MVNO at the Mobile News Awards.  More information on Lebara can be found at www.lebara.co.uk.

Lebara Mobile, has promised to match all proceeds from Bonafide’s new charity single ‘Jeevay Pakistan’, euro for euro, up to the value of €100,000, creating the opportunity to raise €200,000 in total for the people of Pakistan.  The single is on sale now and is available on iTunes for 79p. It will also be available on the Lebara Music Portal for Lebara customers. 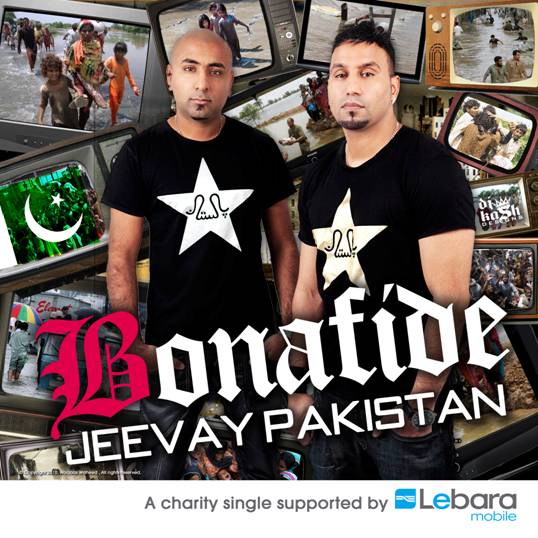