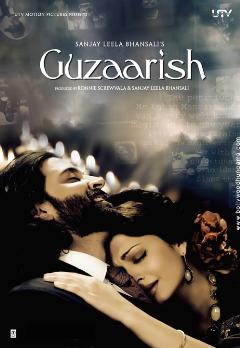 It’s only 19 more days until one of the most anticipated movies of the year – Guzaarish – is released.  The movie reunites hearthrob Hrithik Roshan and the stunning Aishwarya Rai Bachchan – their last film was Jodha Akbar.

The movie is being directed by Sanjay Leela Bhansali.  This can only mean two things – 1) that the soundtrack will be amazing and 2) the storytelling and direction will be top notch.  To date, there isn’t a Bhansali film that I have not enjoyed.  Perhaps most memorable are Hum Dil De Chuke Sanam (staring Aishwarya Rai, Salman Khan, and Ajay Devgan), Devdas (again staring Rai, and with Madhuri Dixit, Shahrukh Khan, Jackie Shroff), and last but not least, Black (Rani Mukherji and Amitabh Bachchan).  Bhansali’s last venture, Saawariya, though not a blockbuster at the cinemas, introduced the world to stars Ranbir Kapoor (Raj Kapoor’s grandson, Rishi and Neetu Kapoor’s son) and Sonam Kapoor (Anil Kapoor’s daughter).  The movie was his ode to yesteryear films and also had hints of the style of Moulin Rouge in it.

Bhansali’s films are always emotional dramas that pull the audience into the storyline.  Guzaarish has all the potential to be a megahit.  The movie deals with the topic of euthanasia.  Ethan (played by Hrithik) is a magician who is rendered paralyzed in an accident.  This sets off a cascade of events and issues when he petitions to court to end his own life.

Aishwarya Rai and Hrithik Roshan sizzled on screen in Dhoom 2 and Jodha Akbar, will Guzaarish make a hattrick for the Rai-Roshan combo?  Only time will tell… check out the song trailer below and let us know your predictions for the film (releases November 19, 2010).  The soundtrack has been composed by Bhansali and both direction and production have also been handled by Bhansali.