Urban Desi Conference and Concert 2017 (UDC), a two-day event by Desi in NYC, will witness the collaboration of this generation’s trendsetting artists of the urban desi music scene on March 30th and 31st. 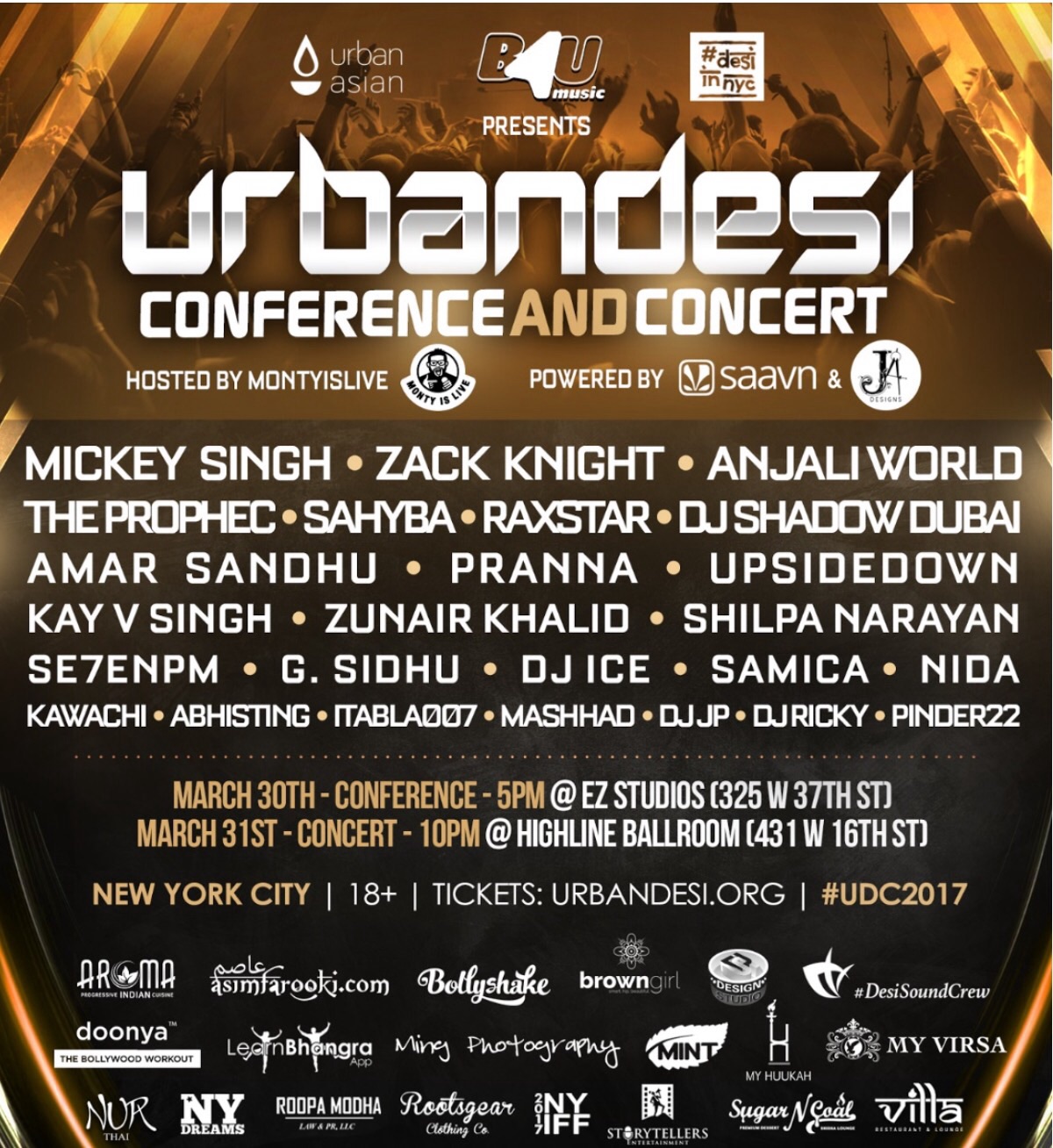 The event, presented by B4U Music, UrbanAsian.com and Desi in NYC, and powered by Saavn and JA Designs. This event is hosted by MontyisLive. UDC will feature performers such Mickey Singh, Zack Knight, Anjali World, Sahyba, DJ Shadow Dubai, Raxstar, Sahyba, Amar Sandhu and Pranna, The PropheC, and many more.

The Urban Desi conference, which will take place on Thursday, March 30 at EZ Studios in NYC, is special aspect of the two-day event. The conference is a unique opportunity for the artists to speak about their experience with music production, composing, marketing, branding, fashion, lifestyle, and much more. The event will be broken up into panels by topic and will be held throughout the day.

This one-of-a-kind event allows fans to gain in-depth knowledge of the industry and learn more about their favorite artists. Special guests will not only include the artists performing at the Urban Desi Concert but fashion designers, photographers, journalists, and more, who will be sharing their stories about their struggles in the field, advice to newcomers and the secrets to success.

The second day of the event is the much-awaited concert, which will take place at Highline Ballroom at the artistic heart of New York City, Meatpacking District. Leading global South Asian artists of the Urban Desi scene will be individually performing their hit singles as well as collaborations and on one stage, under one roof.

Monty Kataria & Abhinav Chintakunta, the founders and producers of the event, said their goal was to expose the South Asian Talent to a larger group of audience and create a platform, where they can enrich their potential and identify valuable measures to become successful musicians.

“Our South Asian diaspora is so vibrant and by understanding the status of our demographic in America, now is the perfect timing to exhibit our culture and talent.”

Aman Syal, co-founder of Urban Asian, is eager to be a part of the event again and hopes to top the magic of last year.

“We really want to provide the opportunity to educate, support and grow the amazing talents we have in our community. Last year was an exciting start to the Urban Desi Concert and Conference, and we’re working to top it this year. Every year we will strive to become bigger and stronger.”

Mickey Singh and the British Asian rapper Raxstar will be returning this year to be a part of the Urban Desi Concert and Conference for a second year.

“Last year was incredible speaking and performing for my New Yorkers. I am more than excited to perform again this year!”

“I’m really looking forward to this year’s Urban Desi event, it was such a great experience last year, It’s a lot of fun seeing all the artists together and performing for people who love what we do.”

Raxstar also revealed he had some surprises planned for his American fans this year at the concert. This year’s line-up also includes British Asian artist Zack Knight. Zack Knight fans in the States are excited to see him perform for the first time in New York alongside his talented contemporaries.

UDC is a unique event fans will not only enjoy but also have an opportunity to learn from. This event promotes unity among South Asians from all across the globe in a time of divisiveness, and works to spread peace, love, and good music.