It’s been in the news lately and the stud star is in trouble and this time for a homicide over his alleged involvement in a fatal road accident that was almost 10 years ago! According to his attorney if he is served he might face up to 10 years in prison. Salman Khan’s lawyer, Deepesh Mehta said a magistrate had accepted an appeal by the state government prosecutors that he should be charged with this issue causing death by negligence which can serve up to a max of two years in prison. 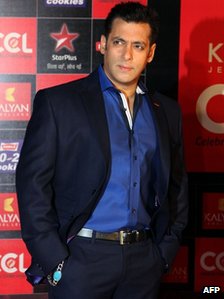 One man was killed during the incident and more than three were injured when Khan rammed his car into a group of homeless people in Mumbai in September of 2002. Khan will start his trial on March 11th and courts are obviously popular for finding a solution so it might even take a few years to complete.He denies the charges and has said he will challenge the latest order.

“There is enough evidence to show that the act was not incidental and hence the case should be tried under a more serious section,” Magistrate Vasant Patil said in his order.

Do you think Salman Khan should serve justice in prison or probation for this case? Let us know, it would be mean if he did serve no films for this long! I am sure we wouldn’t’ want that to happen.