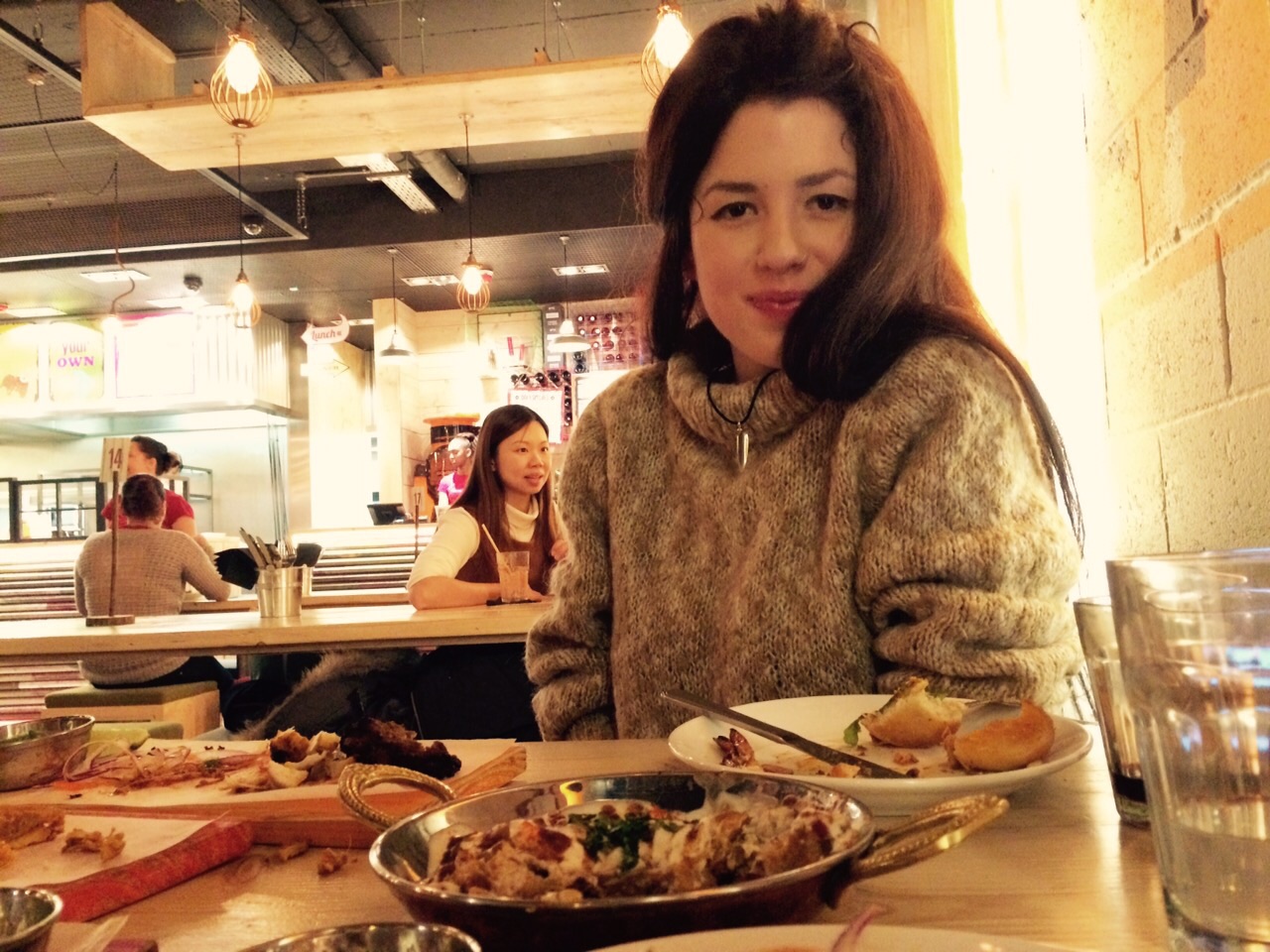 This week, we headed over to the newly launched Indian urban food restaurant INITO to try, pretty much everything, (yes, really) so we could give you the best possible overview (of course).

Nestled in the heart of Shoreditch, in-between Spitalfields and Liverpool Street, you might just miss this gem, being in the back streets, but that only adds to its non-conventional style of dining.

As you approach the Indian ‘roadside eaterie’, inspired restaurant you’re instantly welcomed with the line, ‘INITO – Feed your soul’ and a friendly face when you open the door. 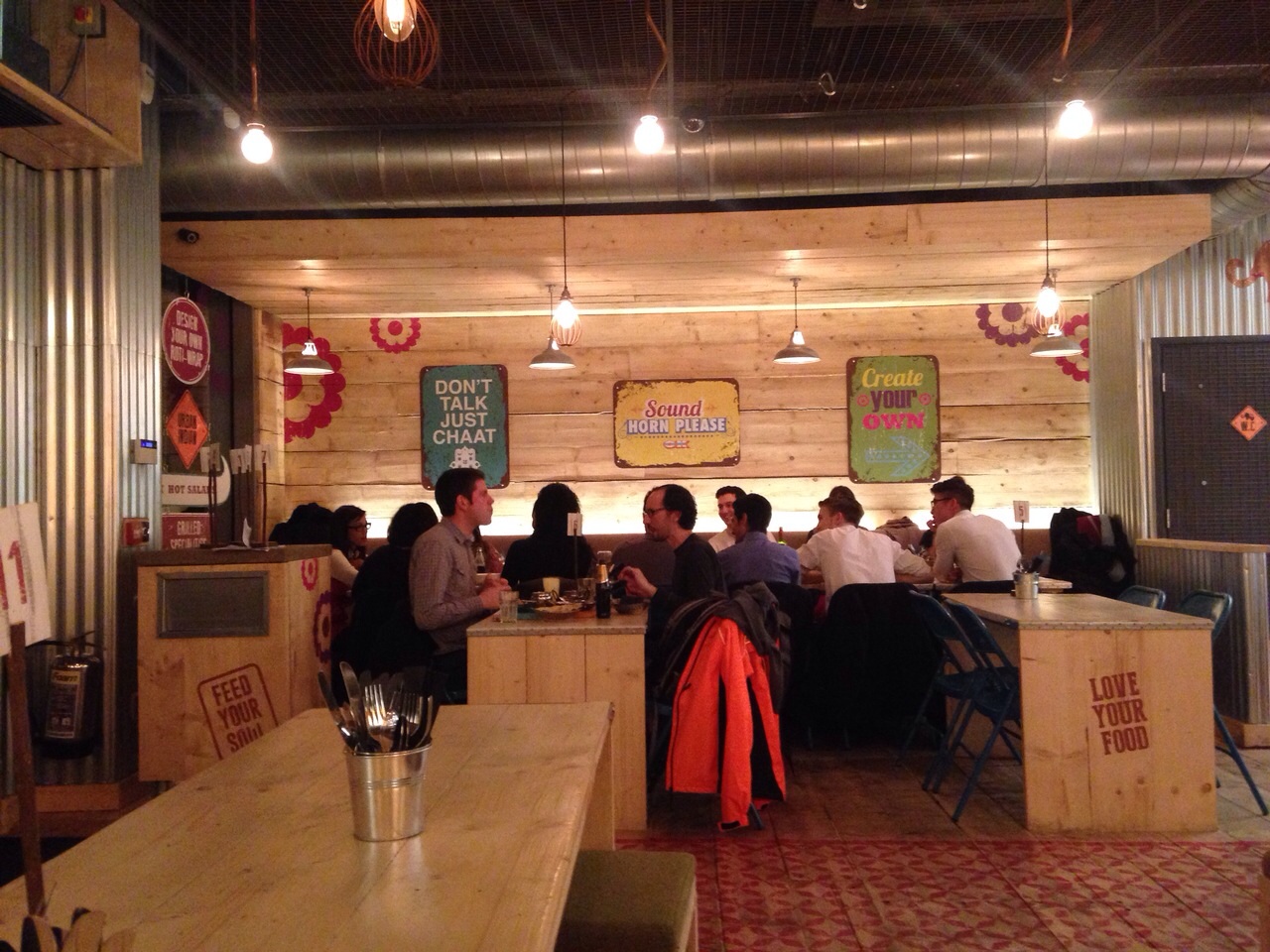 Ambient dimmed lights, trendy alternative décor and a spacious but homely design; INITO welcomes you to spend an evening exploring the delights of their original, authentic Indian street food.

Once inside we found out that the founding members of the INITO team includes a twice Michelin starred chef, an ex-operations director of Nandos and Zizzi as well as a range or totally original, ‘secret’ recipes from the chefs. The influence of these three aspects alone should make for an extremely successful combination, so before we had even tried anything we were pretty excited.

Step 1 – Order the drinks! On the menu you can find a mixture of wines, beers, spirits and soft drinks including a coconut and lime drink, which is delicious by the way. We sampled the South African Chenin Blanc and the highly recommended Primitivo di Salento Doppio Passo, which matches perfectly with the Tandoori lamb chops (Just Saying). 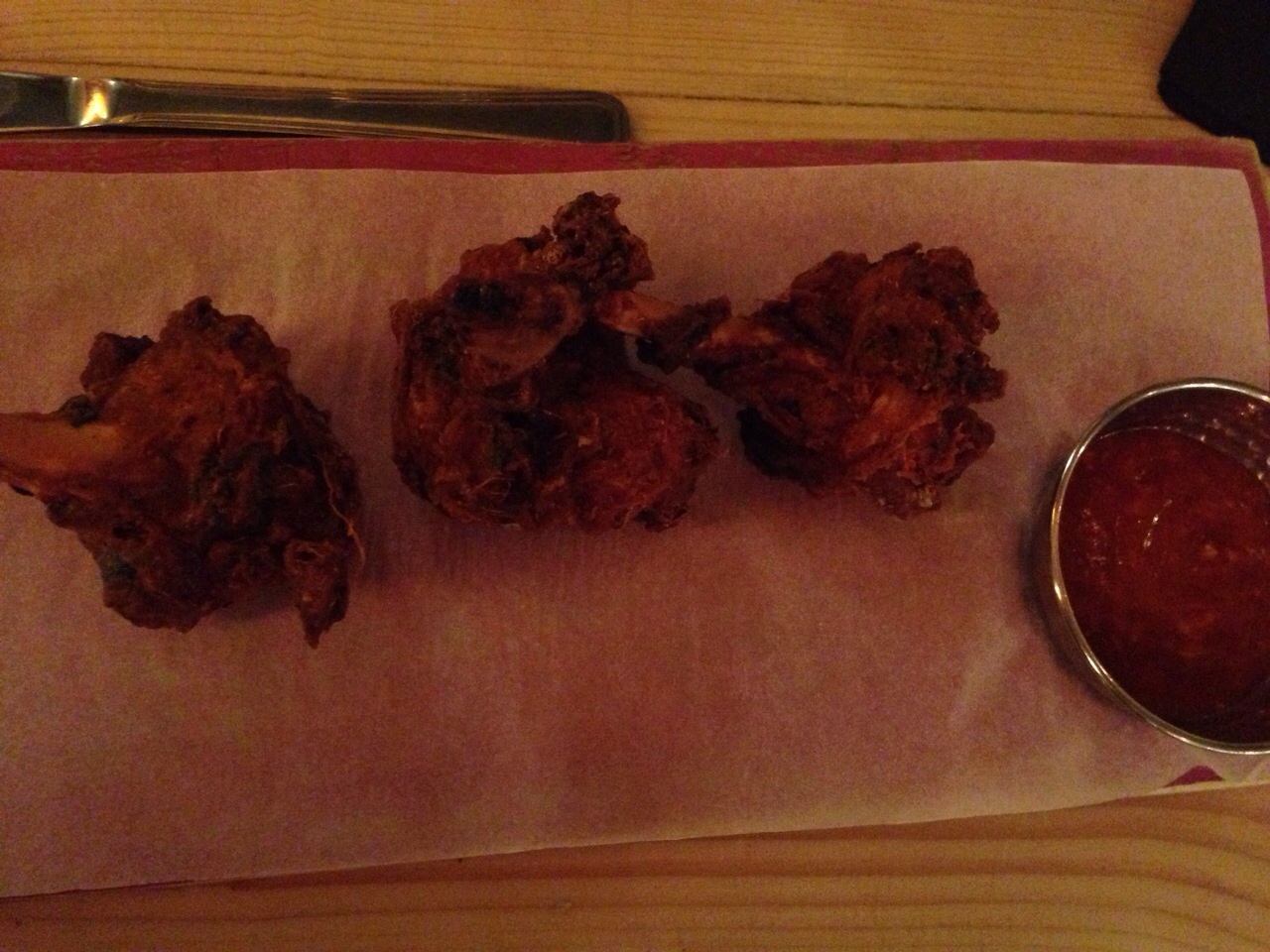 Once the first round of starters arrived we were getting a little hungry and had to restrain ourselves so as not to polish everything off in less than a minute (knowing we have much more to come. We got a mixture of a few tandoori dishes; Grilled Lahshuni King Prawns, Tandoori Fish Tikka and Tandoori Lamb chops served on a colourful wooden dish, adding to the whole cool, unfinished, a bit anti-establishment vibe. We genuinely adored (if they were people we might date them) all three of these dishes; we really hope this is made into an official sharing platter (hint hint)! 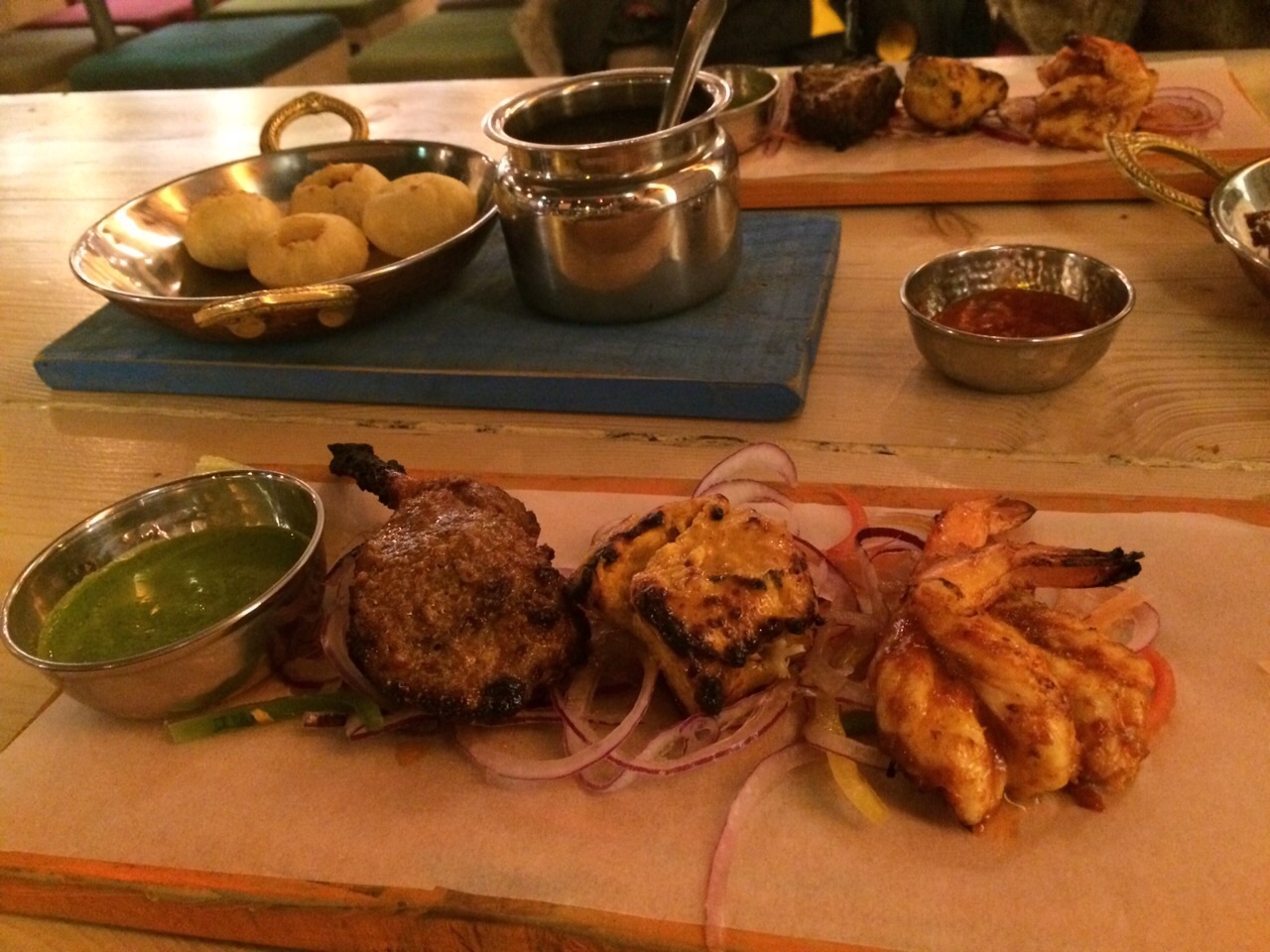 Next up we tasted the Aloo Papri Chaat made up of tangy potato, chickpea, sweet yoghurt, tamarind chutney and nylon sev – an absolute must-have. We had this with the Vegetable Samosa, that’ll definitely make you forget any sub-par samosa you’ve had before this, the Old Delhi Chicken Tikka, which is the most moreish chicken ever and the Pani Puri, which is beautifully served with mint water. 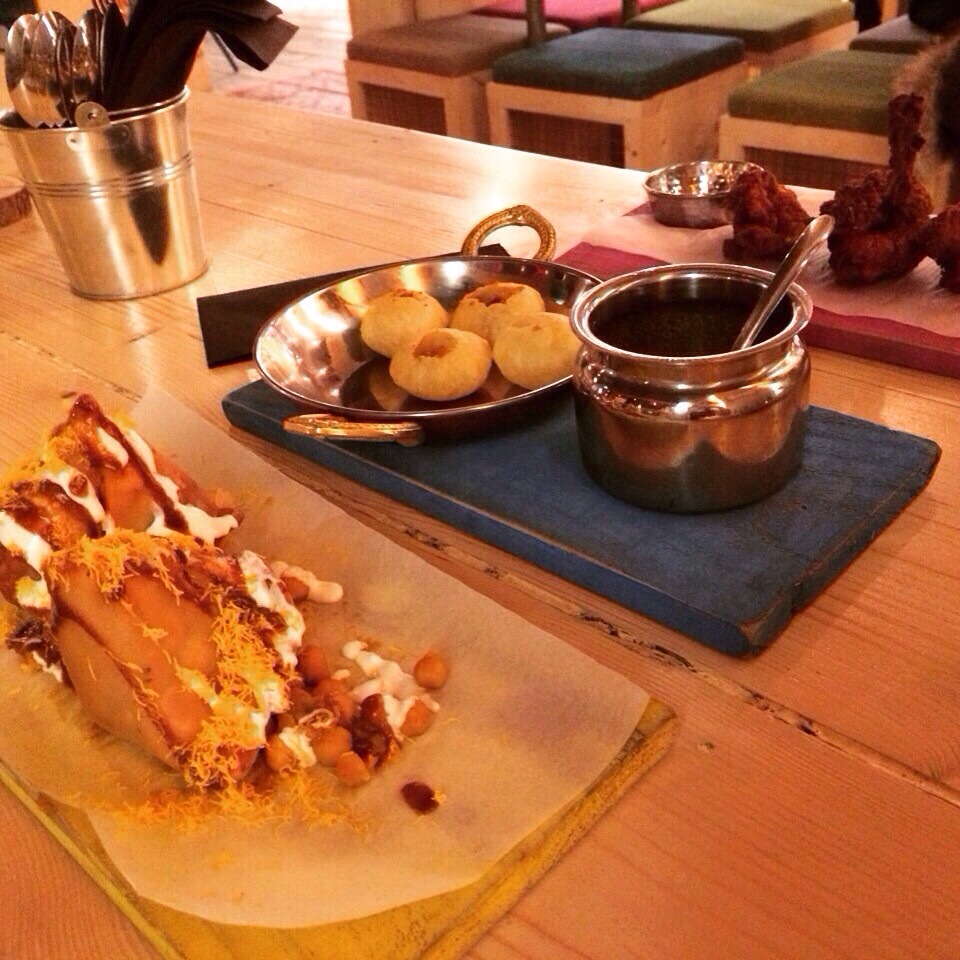 Have we made you hungry yet? Because there’s more… much, much more!

Pau sliders with lamb, chicken tikka and mushroom fillers would make another great sharing dish and the Lollipop Wings are bound to be a favourite amongst chicken aficionados. 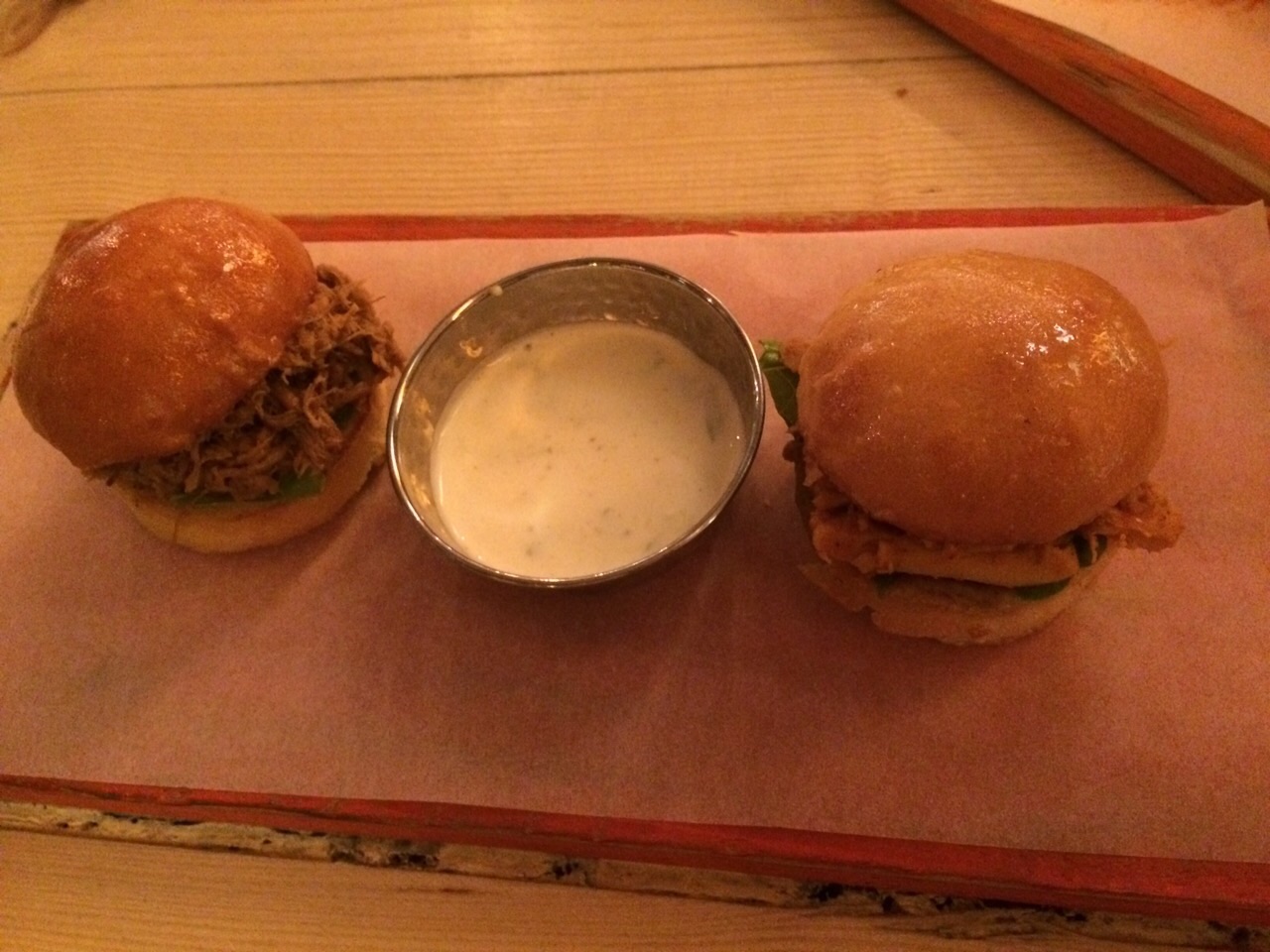 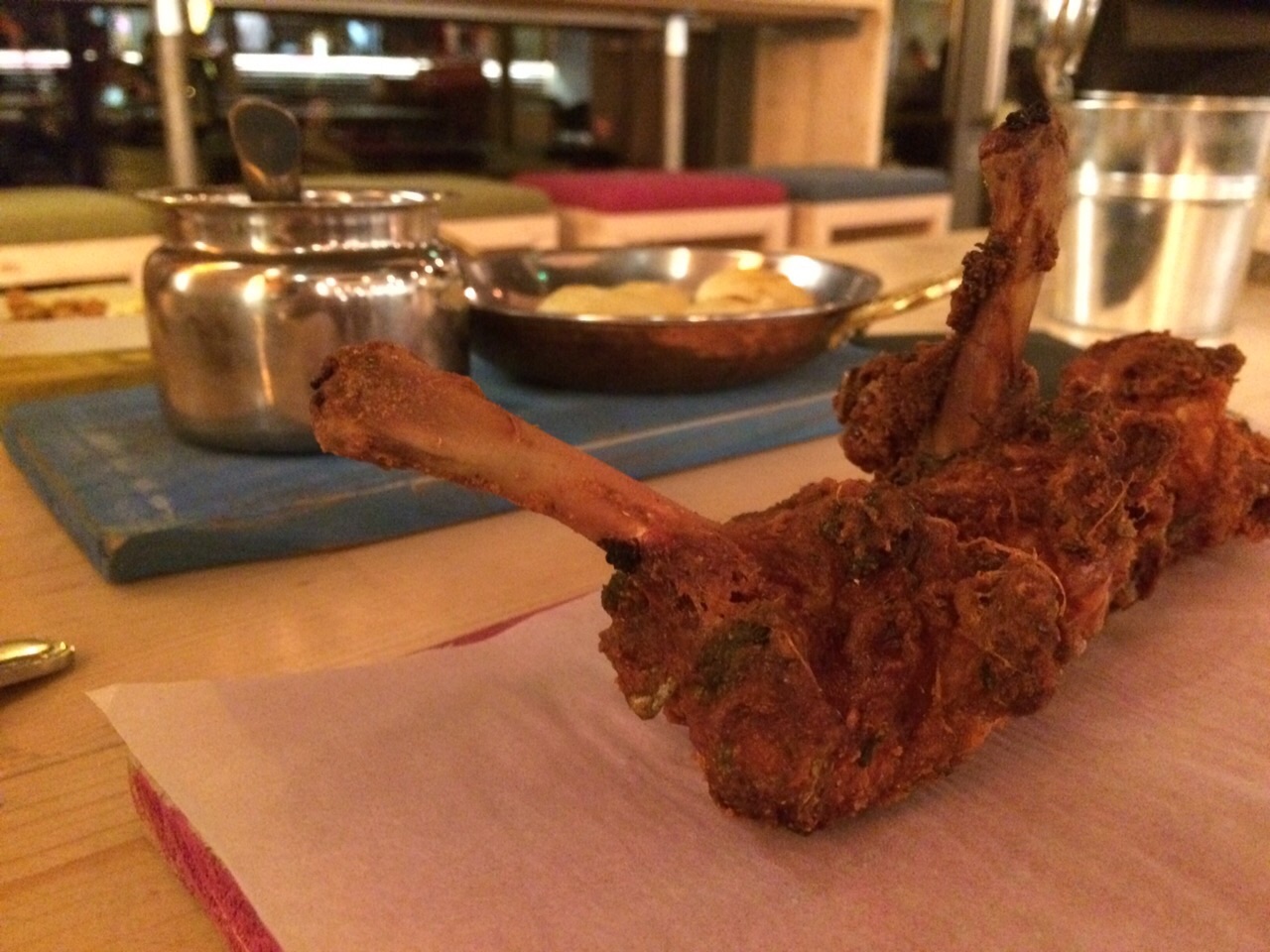 Every dish is presented in a slightly quirky but ultimately modern way, almost like you’re actually at an East-End food festival. But INITO has the advantage of being open ALL year-round. In the short few weeks of being open INITO has already managed to attract a huge crowd, despite not even being visible to the main roads. Students come in hoards, people area seen dashing in for a quick ‘create your own’ roti and there is no shortage of people like us, coming to test the waters on the new eaterie in town. 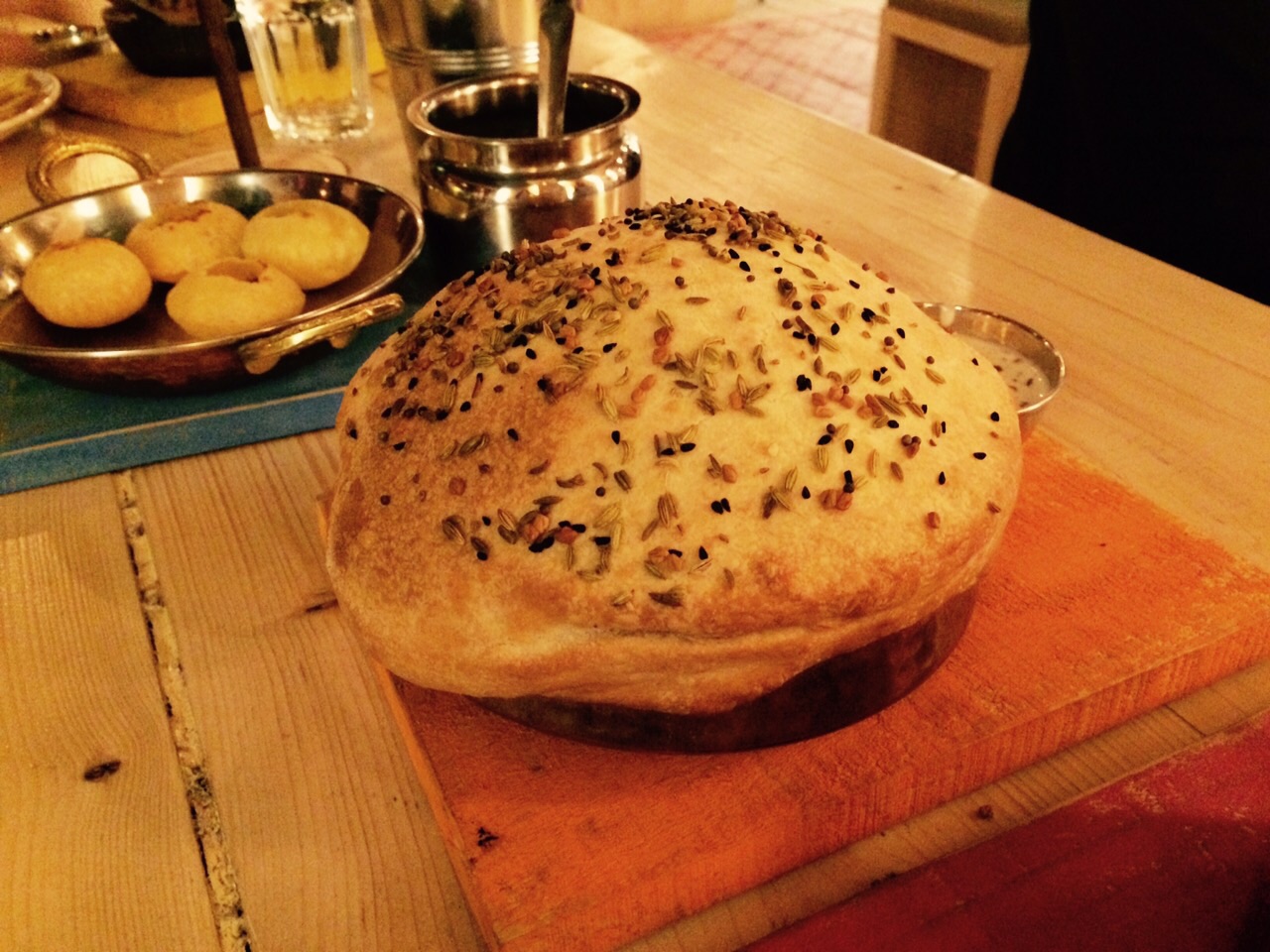 INITO is set to be a favourite amongst the young, urban, Londoners. With it’s off-beat wooden benches, ‘Don’t talk, just Chaat’ strapline and ‘KARMA’ emblazoned across the wall. We can envision the whole vibe will appeal to the hipster-ish types in town looking for the next up-and-coming spot.

Next up, it was curry time! The Urban Lamb Curry is a delicious feast of marinated lamb and blended spices and the Murgh Makhni, a tender butter chicken tikka masala is a winner. Both of which can be served with rice or chapatti (or both if you are us). 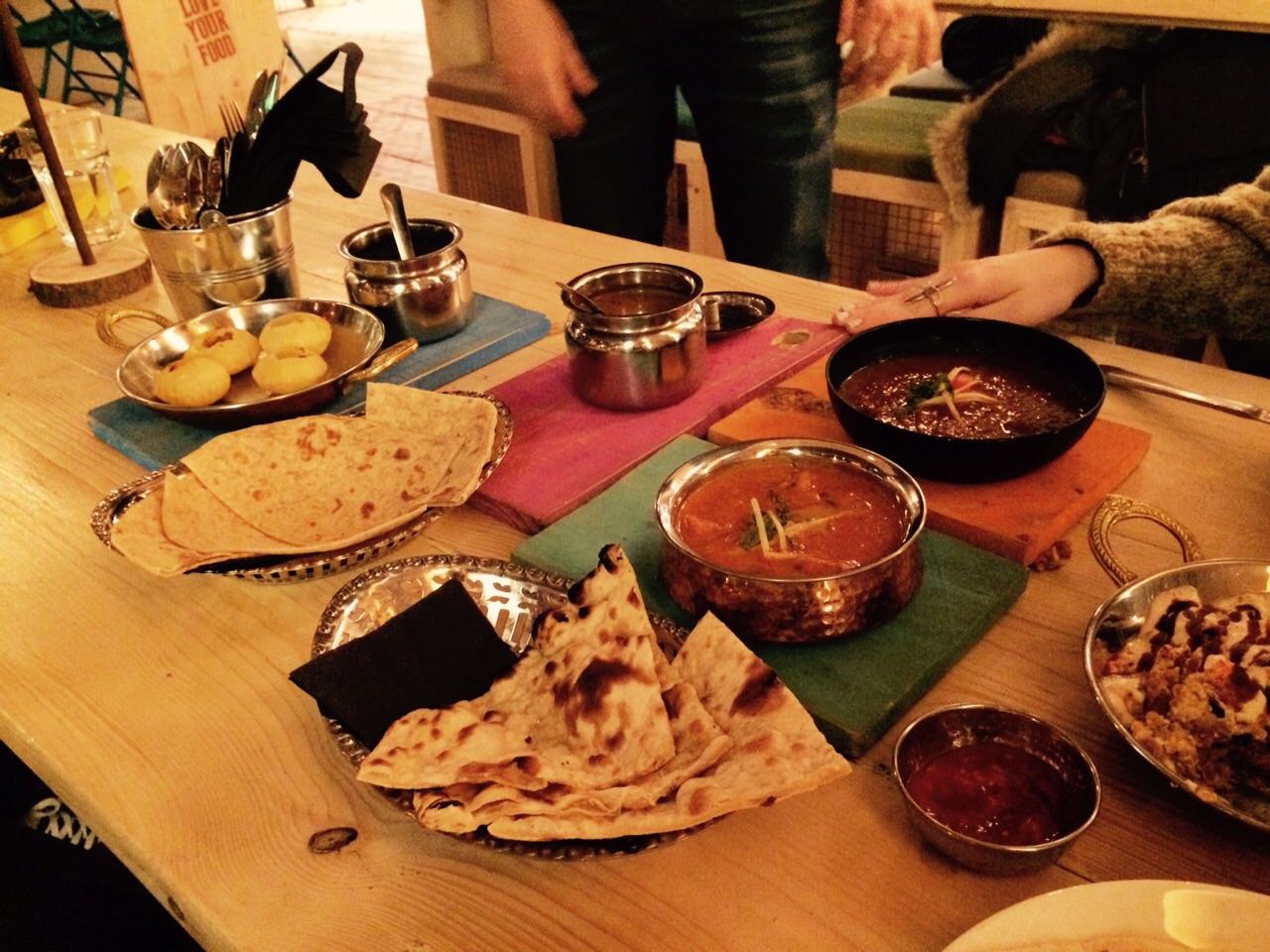 We also tested out the Kaali Dahl, a veggie curry made from traditional black lentils and served with plain rice. It may be veggie but it doesn’t lose any points with the wholeheartedness of its flavour. Lastly, we were served the one-and-only Dum Biryani, which is an experience in itself. It’s slow cooked for hours with naan covering the top of the dish then cracked open (literally) and served with fresh raita. You will not go home hungry after eating this!

If you have room after all of the seductive delights of the menu you have to try the Gulab Jamun, which can only be described as delicious, balls of loveliness. Essentially, a sweet, fried ball of flour, spices and secret ingredients only the chefs know in a warm bowl of golden, syrup-esque sauce. You’ll have to go to see what we mean. This is served with rose and cardamom kulfi, which is hand-made in-house and honestly, we were skeptical but after trying it out there is no-doubt that we will be having this again in the future. This is the perfect way to end the taste sensation that is INITO. 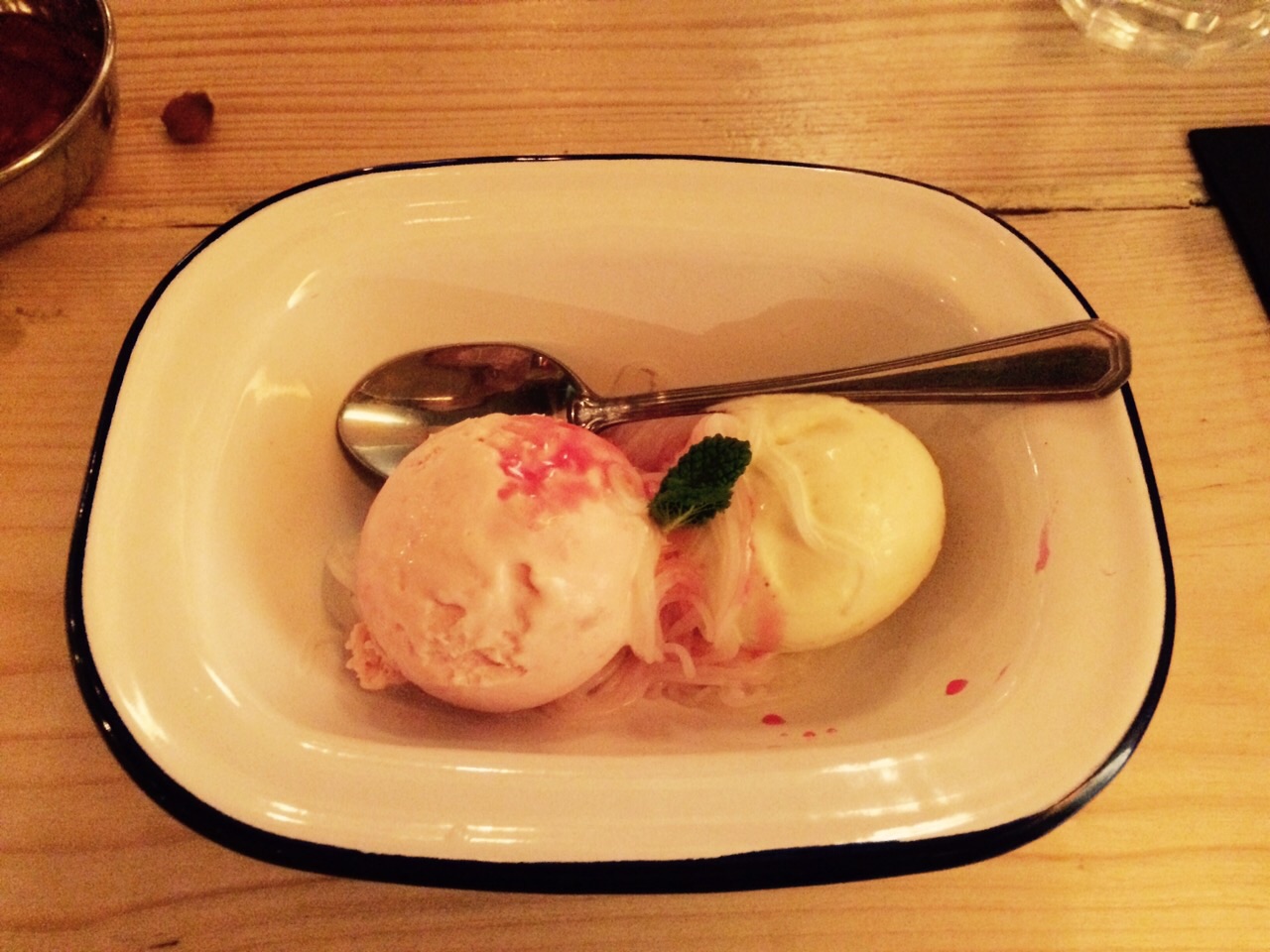 If you’re in London anytime soon, it truly is a must-go-to restaurant. Let us know what you think if you’ve checked it out already!

We wish INITO all the success they deserve.