Irrfan Khan, who will be seen in Ron Howard’s next, landed in Budapest on Monday and will start shooting for Inferno in a day. On his arrival, Tom Hanks presented him with a rather special welcome gift – an extremely sweet note about how they will save the world together! Irrfan, sharing this note with his fans on his Facebook page, wrote a message that was as sweet as the Note itself: 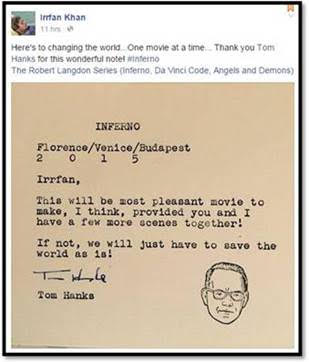 After juggling between all his schedules, he finally manages to start shooting for Inferno. As Irrfan’s next release Jurassic World is just round the corner it took him a lot of time to manage various country premieres and shoot schedules. The actor even had to miss out on the India Premier of his Hollywood flick.

Now how cool is that? We wonder if Hanks will ever end up doing a Bollywood film! Come on Forrest Gump you know you want to!