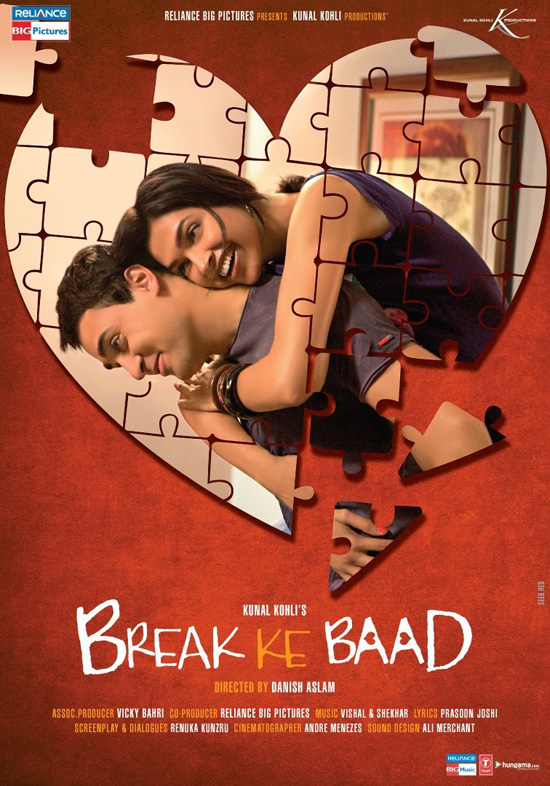 Deepika Padukone has had quite an interesting few years. She finds herself amidst a league of actresses who are in demand and reaching for the stars. And in hopes to create a niche for herself, Deepika finds herself working with different directors with every film along with roles that are unlike anything she’s ever played before. Thus is the same with Break Ke Baad. Deepika found herself starring in a film with Imran Khan for the first time which happened to be directed by newbie director Danish Aslam and produced by newly crowned producer Kunal Kohli. And that isn’t even the last of those firsts. Deepika plays a young wannabe actress who is runs in the opposite direction of commitment in Break Ke Baad. As she jet sets around the world promoting the film, we managed to catch up with the Deepika. What you get is Deepika Padukone talking all things Break Ke Baad in six minutes flat!

The last time we saw you do something lighthearted was in Love Aaj Kal. Break Ke Baad is similar or different and how?
My characters are very different. While Meera was very mature, understanding and sensible where relationships were concerned, Aaliya is extremely irresponsible. She doesn’t realize the value and importance of certain relationships in her life. She doesn’t believe in love; she doesn’t believe in marriage. And at the same time, she’s a girl who wants to achieve a lot for herself; she wants to become an actor and very career driven.

You’re careergraph thus far has been pretty varied so what made you say yes to BKB?
I think the fact that one, it’s very different to the kind of roles and characters I’ve played before and that it is very different from the kind of person that I am. So I thought it would be very challenging to play a role like this.

How true to real life would you say the plot of BKB is? Will audiences be able to relate to it?
Completely! Especially the youth because I think today youngsters are so driven where their careers are concerned. Everyone is so ambitious and wants to do so much. So many people you see today are splitting up, getting divorced because for them, their careers are a priority and they can’t make their relationship work. It’s very real and I think people will definitely connect with it.

The film seems very urban and young. So is it targeted towards the youth or do you believe everyone will be able to watch and connect with the film?
You know I believe that a love story is universal. So even though the story is about how youngsters are in today’s relationships, I think it’s something that everybody will connect with. At the end of the day, everybody likes a ‘feel good’ romantic love story.

How does the music of the film fit in especially since there is not a lot of choreographed dancing in the film?
There is Dooriyan which is a dancey number but then again Danish didn’t want the typical lip sync songs. They are very situational and they are shot like montages. And its feel good music. It’s the kind of music one would like to listen to every morning when you wake up and go to work.

The story is interesting because you play the non-committed one and Imran is the one who believes in love. Did you enjoy playing that aspect of the character?
It was interesting because it’s normally the guy who is commitment phobic or the guy who is running after his career and the girl is making all the compromises. But in this case it’s the opposite. It’s nice and in a way it’s true also because today you see a lot of relationships today where the equations have changed.

How was it working with Danish Aslam, the director, Imran Khan and Kunal Kohli for the first time?
Yeah, it was a first time with all three of them and it’s a great experience just working with someone like Kunal who has done films before. So he was just around making sure we were all taken care of and having a good time. Danish again is someone who is really young and also extremely confident which is one of the reasons I was comfortable doing the film. Danish and Imran are friends today more than colleagues and we got along really well. We have a lot of similarities and I think even as an actor, he’s been very supportive and encouraging.

We spoke to Imran and he said he admired the fact that you could sit back and critique your performances. What do you like most about Imran?
(Laughs) One, his sense of humor. But on a professional level I think that sometimes as an actor you need to step back and let the other person take control of a scene, because the scene is written with a certain person in mind. He’s very comfortable in his own space.

Does Break Ke Baad have a message and what will audiences love most about the film?
That it’s very very relatable!

The one thing Imran said was that there is no message in the film; it’s just pure entertainment.
I absolutely agree!

Break Ke Baad is gearing up for release November 26th, 2010. Be sure to take a break from your busy schedules and catch this one!

*Interview was first published at www.bollyspice.com