Sidharth Malhotra unveiled the first poster of his upcoming movie ‘Aiyaary’ on Twitter.

Check out the poster: 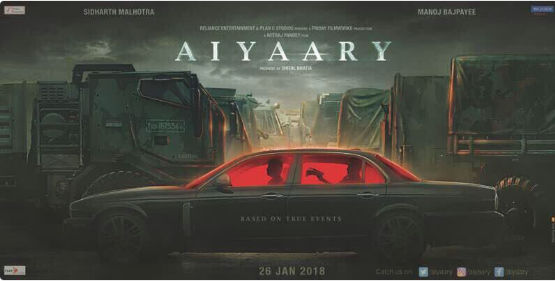 The film will be directed by Neeraj Pandey.

The actor took to Twitter to release the motion picture of the movie.

He captioned the poster, “Here is our #Aiyaary motion poster! Excited to start shoot @neerajpofficial.”

Check out the motion poster:

‘Aiyaary’ revolves around a true story of a relationship between a mentor and his pupil. Hence, one can assume that Sidharth’s character in this film might be strikingly different than what he has done till now.

Considering the fact that the cast includes Manoj Bajpayee and Sidharth, we can safely assume that the former would play the mentor while the latter would carry the role of his disciple. The story is set in Delhi, London, and Kashmir. Neeraj who likes to shoot in real locations will be shooting parts of it in the Valley. The film will go on floors in May 2017.