Few days ago an image that showed two gentlemen, one holding a bat and another mic, standing facing backwards. 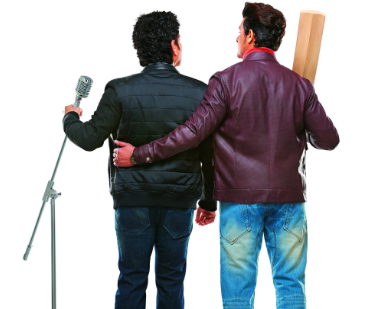 In no time the image went viral and people started speculating about the identity of the duo in the pic were Sonu Nigam and Sachin Tendulkar. We thought that it might be for Sachin’s movie but it seems that .the collaboration was for a song for Sachin’s newly launched app, ‘100 MB’.

Talking at the launch of his app, Sachin said:

“I’m a shy person by nature. It takes some time to change. That doesn’t mean I will not come out and talk. I’m still figuring out. Being a private person, I was not comfortable initially. Now, through tweets, I am able to read what others have posted. Sometimes, it brings smiles on your lips and I have felt ‘Wow, I wish I could meet this person’.”

The app will help his fans to get to know their idol closely.

Talking about that aspect of the app he said:

“This is something I am looking forward to in the digital world, to be closer to my fans. This app will guarantee that whatever I say reaches my fans. Through this app, my fans can directly connect with me. My views, whatever I post, are guaranteed of reaching all my fans. Whatever I am today is because of the fans. Whatever my videos, opinions, posts will reach my fans.”

Talking about his singing time with Sonu Nigam, he said:

“I have always been fond of music. I never thought I would sing a song. My wife (Anjali) is the brain behind me singing this song. It was her idea. She was the only one who believed I could sing. I did not practice much. It was just then and there that I sang. I heard the tune. I quite liked it. After that, I was asked to practice a little bit, which I did in the studio. Before that, I had not practiced much. It helped, I was used to listening to music and humming songs. It helped. Sonu Nigam’s commitment, his preparation, he worships music, that means a lot. Any passionate person does that. For us, it is cricket. For him, it is music. You ask anybody who has been top in his profession, he will be is passionate. It does not come on its own. It requires preparation.”

Through the song, Tendulkar has also thanked all the players who have been part of his 24-year international journey including six World Cups.