The first video song to be released from the film, “Pyar Ki” is a supremely addictive track that will make you want to bounce along. Sung by Nakash Aziz, Divya Kumar, Anmol Malik, and Earl Edgar, the flamenco-sounding music bits in this track are unique and lend an ethnic flavor to this party number. Nakash’s voice sounds awesome in this track, and the rap, especially the ba ba black sheep section, is absolutely hilarious! Definitely my favorite of the album so far!

“Taang Uthake” features amusing choreography by the Housefull 3 boys in the video. With vocals by Mika Singh, Neeti Mohan, and Mamta Sharma, “Taang Uthake” has all the elements of a typical masala dance song. There’s nothing particularly new here, as it sounds like bits and pieces of many popular songs put together.

Sung by Mika Singh, Akira, Miss Pooja, and Kuwar Virk, “Malamaal” is a track with full-on Punjabi flavor. It has a mix of organic and electronic instrumentation and the melody sounds a bit like “Sadi Gali” from Tanu Weds Manu. I was hoping the track would speed up towards the end to build momentum and energy.

“Fake Ishq” begins with a funny prelude to an even funnier qawwali number with a catchy chorus line. The fusion of harmonium, a quintessential element of qawwali, and electronic orchestration is nice, especially the electric guitar bits that float in and out throughout the song. There could not have been better singers to pull this one off than Kailash Kher, Nakash Aziz, and Altamash Faridi, who stay committed to the purposeful placement of unhappy lyrics in an unexpected genre with relatively fast beats. 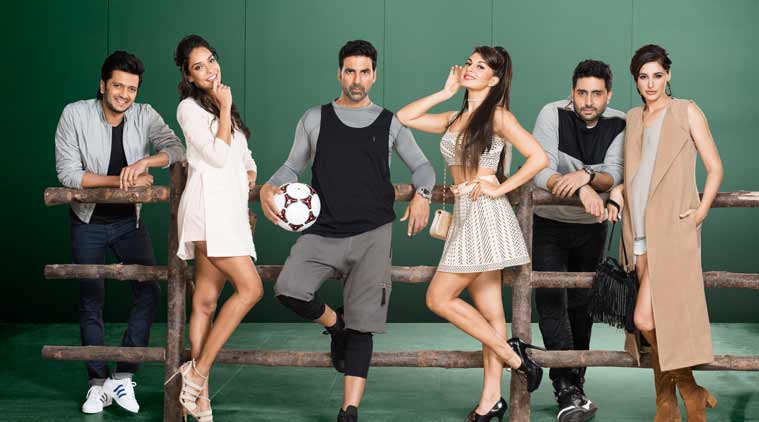 Final Verdict: Housefull 3 is not a particularly unique album. All the songs sound somewhat similar but what else can be expected of a masala comedy film? Needless to say, there’s no doubt that these tracks will perfectly fit into the comedic mood of the film and we can’t wait to see them onscreen!