Four singles. Four Goafest Advertising Awards. 10 Million Plus Views. One Honorary Webby Award. India’s first transgender band, the Brooke Bond Red Label 6-Pack Band has been an unstoppable force on the internet and off of it. And with its fifth single, ‘Ae Raju’, the band seems all set to break the internet all over again! Because this time, Bollywood’s biggest heartthrob, Hrithik Roshan, has joined forces with the band to make their new single even more massive!

In ‘Ae Raju’, which is all set to be this year’s chart-topping dance number, Hrithik Roshan makes the world a more welcoming place for India’s first transgender band, true to the philosophy of Brooke Bond Red Label. The dancing shots of Hrithik with the band in the video epitomize the Brooke Bond Red Label credo of inclusion. 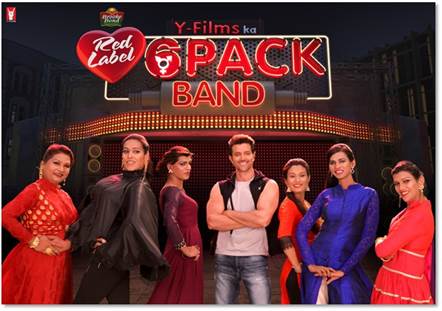 This philosophy is also echoed by Hrithik Roshan’s lifestyle brand, HRX, whose motto ‘Defeat defeat’ motivates the members of the band so they can be superheroes in their own right. By giving an all-new, empowering meaning to a term that’s used as a term of endearment by the transgender community at large, ‘Ae Raju’, HRX believes that the Brooke Bond Red Label 6-Pack Band can truly be the best version of themselves.

Treated in a unique comic book style, the video of the song is yet another stand out feature, and is certainly going to be a talking point for not just the fans of Hrithik and the band, but for fans of music and film in general! The ‘kick-ass’ story, style and slogan of the song is also the reason Oppo Mobile has come on board as ‘Tech partner’. The ‘selfie moment’ of Hrithik and the band in the video is sure to be viral on social media.

Says Hrithik Roshan, “I think that one of the main causes of anxiety in the society as a whole is the feeling of differentiation between people. It’s important to feel connected to people around you and we cannot just reject them just because they are different from us. I’ve been following the 6 pack Band and when I heard that the 6 pack band is creating a meaningful message in a fun, entertaining way, I had to be a part of it. Shooting with them was an amazing experience.”

Check out the song below.