Director Matthew Brown’s upcoming film The Man Who Knew Infinity is creating a lot of buzz across the globe and it also earned accolades at the San Francisco International Film Festival, which was held at Castro Theater on April 24 in San Francisco, California.

The lead actress of the film, Devika Bhise looked stellar as she sashayed in wearing a pink and red Giulietta dress, which made her stand out on the red carpet. She got the color-blocking right and teamed her vibrant dress with pointed oxblood Paul Andrew sling backs. The young actress had her make up on point and finished her look with gorgeous soft curls! Pretty Dazzling too!

Also present at the do were Stephen Fry and Matthew Brown. Dev Patel is essaying the role of mathematical genius S. Ramanujan in the movie and Devika has played the role of his wife Janaki in the much-acclaimed film. 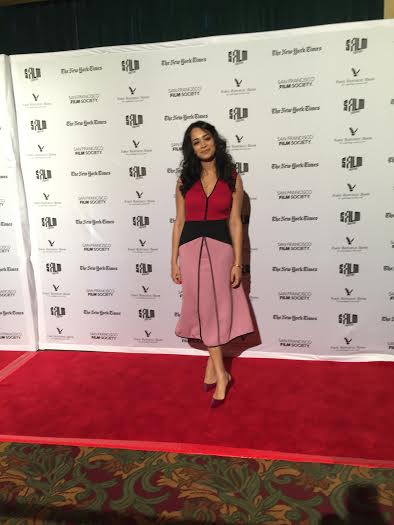 An Edward R. Pressman/Animus Films production in association with Cayenne Pepper Productions, ‘The Man Who Knew Infinity’, starring Dev Patel, Jeremy Irons, Devika Bhise, Stephen Fry, Toby Jones and Arundhati Nag, has been written and directed by Matthew Brown and is slated to release, in English and Tamil, on April 29, 2016.