On 29 July 1981, Yash Raj Films released one of their most infamous projects, Silsila, in which Bollywood king Amitabh Bachchan plays a man torn between his wife and his mistress. The film sent rumor mills into overdrive by casting Amitabh’s wife, Jaya Bachchan, and his alleged offscreen mistress, Rekha, in roles that seemed to precisely mirror their real-life circumstances. 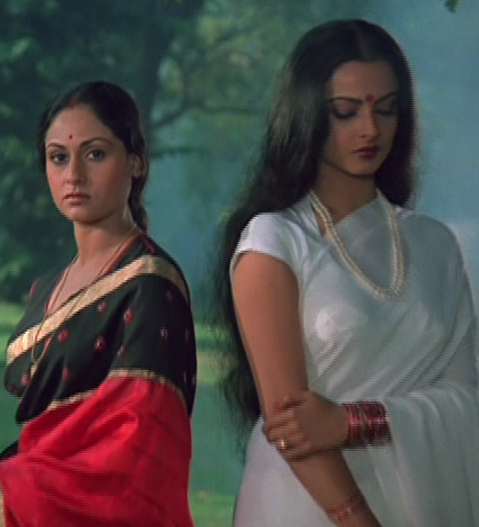 Silsila left many scratching their heads. If Amitabh and Rekha were really having an affair, why would any of the cast members (especially Jaya Bachchan) agree to take part in a film that exploited their personal drama? Was there any truth to the affair, or was it simply an elaborate publicity scheme to bring in audiences?

The rumors in those days went something like this: Amitabh had been married to Jaya Bhaduri for three years before starring in his first film with screen siren Rekha in 1976. The film, Do Anjaane, went on to become the first of many to showcase the two as a successful romantic jodi. It was said that Amitabh’s film choices had caused a personal standoff between Mr. and Mrs. Bachchan, who by that time were already the parents of two small children. Allegedly, Amitabh began spending most of his time with Rekha, who is said to have fallen hard for the Angry Young Man. At the time, the already-married Dharmendra made headlines by taking Hema Malini as his co-wife, and Rekha supposedly hoped that Amitabh would follow suit. She even went so far as to show up at Rishi Kapoor’s wedding in 1980 wearing a mangalsutra, sindoor, and rings gifted to her by Amitabh, as if to announce that her presence in his life was permanent. 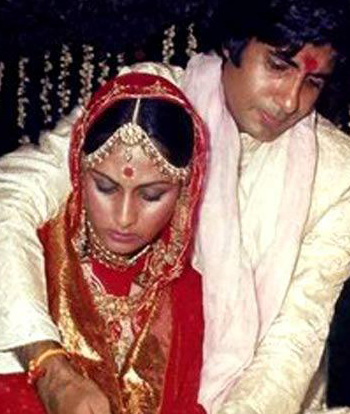 When it came time for YRF to make Silsila, some say that Yash Chopra had the intended lead actresses (Parveen Babi and Smita Patil) replaced with Rekha and Jaya to cash in on the media frenzy surrounding the Amitabh-Rekha affair. Because the film ends with (spoiler alert!) Amitabh and Rekha ultimately parting ways and the former returning to his wife, it is said that Jaya only agreed to do the film as a means of sending a message to the world—and to Rekha—that she didn’t intend to forfeit her husband.

Silsila was the last film to feature Amitabh and Rekha together onscreen. A year later, in 1981, Amitabh met with a near-fatal accident on the set of Coolie that brought the nation to a standstill. While Amitabh eventually recovered, it is said that his alleged affair with Rekha did not, and that Amitabh took the accident as an opportunity to turn over a new personal and professional leaf (he even left acting for a brief stint in politics following his long recovery). Rekha went on to marry Delhi-based businessman Mukesh Aggarwal, who committed suicide a year later, while Amitabh and Jaya have recently celebrated their 42nd anniversary.

So did they or didn’t they? The rumors have always been denied by those involved. In an interview with Simi Garewal, Rekha confessed that although she was admittedly in love with Amitabh, they never had a personal equation. In a 2008 interview with IBN, Jaya spoke about the alleged affair and said that there was no truth to the rumors and that if there had been, the Bachchans would not still be together.

Still, the behavior of all parties involved at several public events have kept the rumors going well into the 2010s. At an award ceremony held on Amitabh’s birthday, Rekha shocked the crowd by wishing happy birthday to a “special” someone somewhere. And at the 2009 Filmfare Awards, Amitabh was photographed making a rather conspicuous getaway as Rekha greeted his son and daughter-in-law. 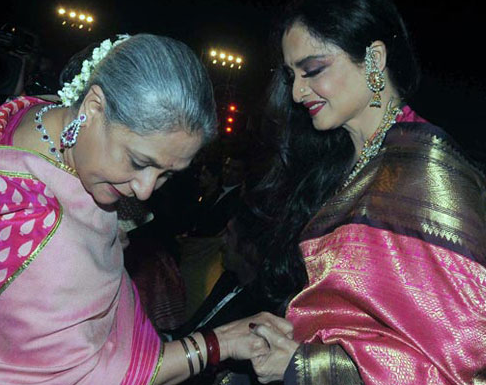 The mystery, many believe, has been laid to rest, as filmmaker Yash Chopra spoke openly about the affair to BBC Asia a few years ago, saying that the affair had begun before Silsila and that throughout the making he had been “on tenterhooks and scared because it was real life coming into reel life. Jaya is his wife and Rekha is his girlfriend, the same thing is going on. Anything could have happened because they are working together.”