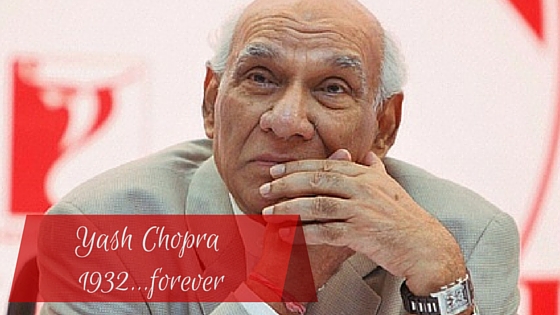 On the eve of the renowned late filmmaker Yash Chopra’s 83rd birthday, his son Aditya Chopra announced his next directorial film Befikre. After 7 years the filmmaker will be carrying on the Yash Raj legacy.

Today, on Yash Ji’s birthday we remember him for his classic unforgettable films. A genuine, simple person who brought magic on celluloid, till this date we remember how he displayed Indian women with respect, beauty and sincerity.

We remember Yash Chopra for his evergreen films, from Waqt, Kabhie Kabhie, Silsila, Chandni, Darr, Dil Toh Pagal Hai and his last film Jab Tak Hai Jaan. He has also taken many films under his wing as a producer, to name a few, Dilwale Dhulania Le Jayenge, Mere Yaar Ki Shaadi Hai, Saathiya, Hum Tum and so many more.

Yash Chopra has become such a huge influence on the way we make films and remember Indian Cinema. His name, his brand and his films have made an enormous mark on the history of cinema, that till this date every Indian household is still growing up with Yash Chopra films.

Whenever I think of Yash Chopra I think of three favorites of my own.

This classic film, with the most unforgettable on-screen trio Amitabh Bachchan, Jaya Bachchan and Rekha. This film at it’s time created a huge hype as at the time there was lot’s of chatter about the affair between Rekha and Amitabh. This was their last film together. At the time it didn’t do too well, but later down the road it become a large cult following film and till this date it is such a beautiful story and film to see. Whenever I think of Silsila I think of two things, the intense confrontation scene between Jaya and Rekha’s characters and the song, Dekha Ek Khawb.

While Yash Chopra has displayed the art of Indian dance in almost all his films in some shape or form, DTPH is a classic dance based film that I will carry on with myself forever. I know a lot could not agree more. My all time favorite scene from this film is when Rahul played by Shahrukh Khan is searching for his ‘Maya‘ and he is in the studio playing the drums and hears the sounds of Pooja’s ghungroo (ankelt), played by Madhuri Dixit expressing her emotions, feelings and love for dance through a classical-western solo performance. He notices her and says, ‘Maya‘! It’s such a magical moment for him and her, and such a beautiful scene in the film.

And lastly, my all time favorite. Maybe because it’s from my time and I had the chance to see this on the big screen, but it is truly my all time favorite Yash Chopra film! From beginning to end, this film hits all emotions. From Shahrukh Khan’s acting, to the relationship that is shown between Veer and Zaara to Saamiya fighting her first case to bring justice for Veer.