Since I was a kid Karan Johar is a name I have always remembered. Karan is that type of filmmaker who has always gone above and beyond to ‘put a face with his name’. Everyone knows who he is, whether it’s, the guy on Koffee With Karan or the guy who made Kuch Kuch Hota Hai or the guy from Jhalak! 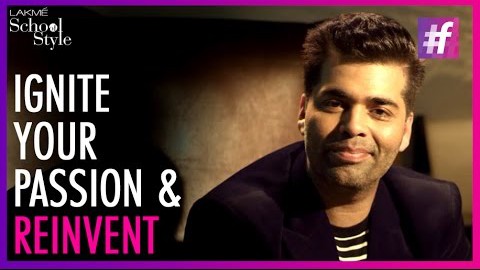 He’s everywhere, he has a bright personality and it comes off to be infectious to his co-workers. He is very talented because he’s not just a director, but a producer, fantastic spokesperson at award shows, a great judge and entertainer on Indian reality TV and now has even ventured into acting.

If you follow Karan Johar religiously like myself you are aware of his insecurities, his perception on his own films and her perception on cinema. He understands how to grasp onto cinema and he passes on the torch to really talented new-comers, be it a new director or actor.

I came across this clip of Karan and it truly touched me. Every word he has spoken in this clip has such a beautiful meaning and message and truth behind it.

So whether you are gearing your life towards the entertainment industry, or elsewhere, get inspired by Karan’s words and reinvent yourself, live freely and learn from life mistakes. I hope this inspiring message will touch you as much as it touched me.