EveryMedia Technologies, India’s leading integrated marketing communications company, stood out at the 2015 DMA Asia ECHO Awards with three honours in the Effectiveness – Entertainment & Publishing Category. The Awards were for outstanding results received for film marketing campaigns on the grounds of excellence in creativity, strategy and results. The awards won were – Gold for ‘Queen’, Silver for ‘Heropanti’ and Leader Award for ‘Mary Kom’.

“Queen and Mary Kom are films which have defined a new wave of films with entertaining content combined with a powerful message. They also have established the power of women centric stories in an otherwise male dominated Bollywood. Such path breaking films needed equally impactful campaigns in order to build a connection between the audience and the characters. We are happy to have partnered with EveryMedia for their innovative integrated digital campaigns, and for their implementation of measurement metrics to capture its impact. Both films did exceptionally well at the Box Office and set new benchmarks in the history of Indian cinema.” 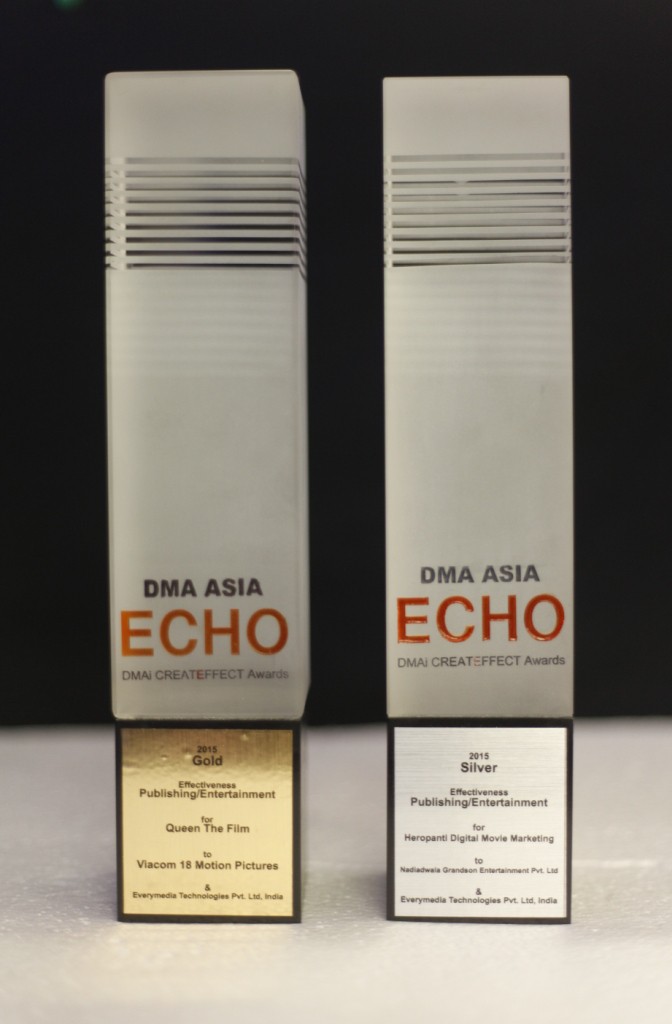 “Heropanti was a special movie for us, since we were launching two newcomers. We had many objectives to achieve, and together with EveryMedia, we managed to achieve them all in a way that surpassed our expectations. They took the digital campaign to a different level and did a great job in achieving our objectives. I am glad their work has been recognized and that the movie did so well at the Box Office”

Through the victory at DMA Asia ECHO Awards, EveryMedia now features as a nominee at the DMA International ECHO, which honors the world’s best marketing campaigns. This feature is also a landmark for the Indian Film Industry, as the first time a Bollywood film will compete in the category, on an international platform.

“It is certainly exciting and a privilege to be a recipient of the DMA Asia ECHO Awards. We thank Viacom 18 Motion Pictures and Nadiadwala Grandson Entertainment for the opportunity to work on such interesting films, and also for the support and creative freedom they give us. It reinforces our passion and commitment to provide ground-breaking digital campaigns and partner in their success.”

Marketing campaigns at EveryMedia Technologies aim to provide clients with a 360-degree approach for a brand’s online presence. With dedicated departments and a committed taskforce, EveryMedia has emerged as a competitive and cutting-edge solutions provider in the digital marketing space. Way to go Team EM!