We all had the chance to see this snap of director, Rohit Shetty with Shahrukh Khan and Kajol! What is happening? 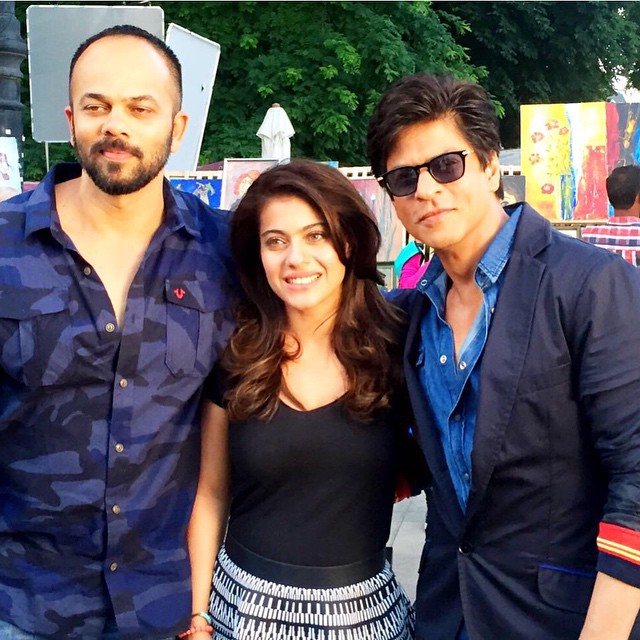 Shahrukh and Kajol are soon to be back on the big screen this December and every Bollywood fan is anxious for this day to come!

So let me take you back down memory lane…

We first saw the young couple in Bazzigar and action-crime thriller film which has one unforgettable dialogue till date!

In 1995 we saw duo again in two films this time! Karan Arjun and the evergreen, Dilwale Dhulania Le Jayenge! If I’m not mistaken, after DDLJ, that’s when the take off for Shahrukh and Kajol began and fans all around the world fell in love with the unforgettable, Raj and Simran! Every girl has always been in-search for her Raj after seeing DDLJ and every guy want’s to travel to Switzerland to meet his ‘senorita’! Even till this date we all know the film plays in cinemas.

Here’s a personal one for myself that touches home for me. 1998 Kuch Kuch Hota Hai, my love for cinema started here and when I meet people, this one definitely hits their “favorite Hindi films list!” After director Karan Johar assisted Yash Chopra on the sets of DDLJ Karan began his directing career with Bollywood’s favorite stars of the time, Shahrukh and Kajol or also known as, Rahul and Anjali! One of the greatest love-friendship stories we all have ever seen in Indian cinema till date.

In 2010, we saw the favorite jodi again in a Karan Johar film, but this time not as Rahul and Anjali. Karan took a turn in his own flavor of film-making and created a different type of chemistry between Shahrukh and Anjali, which I found rather cute and charming.

Aren’t you excited to see this jodi back together on-screen five years later and that to in a Rohit Shetty Film! What do you think Dilwale will be about? Comment below and share us your thoughts! Don’t forget to take our poll below too!