Disney-Pixar’s soon to release 3D animation movie, Inside Out, just got more exciting. The makers of the film will be taking the Internet by storm as they recently launched the Inside Out Facebook Stickers! 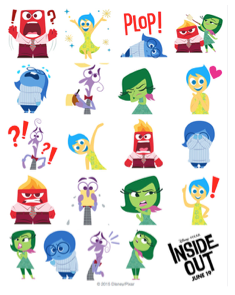 These are now live in the Facebook Sticker Store and can be availed at this link: http://on.fb.me/1dANMJB. The unique thing about these stickers are that they can not only be used for messaging but also for but they can also be used to comment on posts. Since the movie is about the five emotions in our head characterized by Joy, Anger, Sadness, Disgust and Fear, the filmmakers deemed it a seamless fit to take the social media by storm through this unique innovation.

The film features the voice cast of Amy Poehler as Joy, Bill Hader as Fear, Lewis Black as Anger, Phyllis Smith as Sadness and Mindy Kaling as Disgust. Directed by Pete Docter (of Up fame), the film is all set to hit the Indian movie screens on June 26, 2015.