Ali Zafar is undergoing intense training in martial arts and kickboxing for his next movie, Deosai. The Urdu-English bilingual action drama will mark his international debut as a producer. 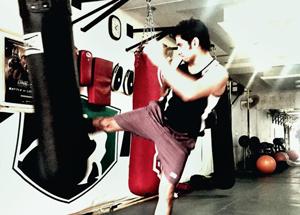 The 35-year-old Pakistani actor, who will also act in it, has hired one of the best trainers in martial arts and kickboxing in the world to help him get into shape. Ali recently said

“I started the prep a week ago and will keep going for another seven eight weeks before we start shooting in August.”

He trains two hours daily at a local mixed martial arts (MMA) club and has a special protein diet. The film will be shot on one of the highest plateaus in Asia and has some fast-and-furious action sequences.

“We will fly down trainers and action directors from abroad,” he added.

Sounds like we’ve got another action hero in Bollywood, What do you think of Ali Zafar as an action hero? Let us know!