Anurag Kashyap’s Bombay Velvet is a flashback into the black-and-white film era, with exquisite costumes, old Hollywood style sets, powerful men manipulating government, murders under the cover of darkness and of course, what Bollywood flick doesn’t have some romance? Known more for his different brand of films, Kashyap has done wonders for this film by taking this unique story and making it for the masses. Kashyap took a hands on role to bring to life Gyan Prakash’s book Mumbai Fables. Kashyap’s attention to detail is evidenced in the mannerisms of his actors and the accuracy of his sets. An amalgamation of classic crime flicks of old, this film was pretty interesting but at times predictable. This one is hard to pin point as there were some amazing high points but things like the twin theory and easily fooled cops make it cliche.

Set in the 1950’s and 60’s, the film stars Ranbir Kapoor as Balraj, a street fighter and petty thief who’s always looking to make it big with his best friend Chimman, played by Satyadeep Misra. One day they encounter the powerful Kaizad Khambatta, real estate baron and owner of the Torrent newspaper, and their lives change. The boys become Khambatta’s right hand as he calculates a takeover of Bombay. There is also a power struggle between Khambatta and his former friend, Jamshed Mistry aka Jimmy, the owner of Glitz, a rival newspaper. Khambatta establishes the grand Bombay Velvet club, an exclusive gentlemen’s club under Johnny Balraj’s name. Here is where the film deals with post colonial life, like seedy deals, prohibition, prostitutes, blackmail, gambling and much more.

This film is not for the faint-hearted for sure, there is a lot of violence. Initially it made sense because it moved the story foreword but later it was a psychotic mess. Yet the movie progresses in a logical manner, there is no masala magic involved, the inclusion of accurate Bombay history makes the story much more believable. 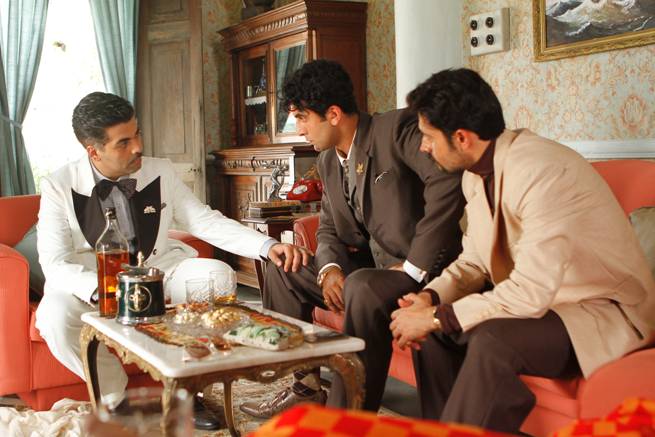 This crime drama wouldn’t be complete without a love story mixed in, which is why we meet the lovely Anushka Sharma as the talented singer, Rosie Noronha. Taken away from her home in Goa under false pretenses and abused, this young girl fights the world as she works to become a famous singer. Once Balraj sees her, he falls in love instantaneously. It isn’t long before she is the star of Bombay Velvet which brings her the fame she dreamed of. The storyline eventually moves from Balraj becoming a “big shot” to his love for Rosie but unfortunately there were no sparks in this equation. Although there were some cute moments, some laughs too, but this jodi didn’t mesh romantically. These two didn’t have the sizzling spark necessary for this so called “epic love saga.”

Anushka Sharma doesn’t have any lines the first quarter of the movie, she’s literally just a pretty face lip-syncing songs. Sadly Rosie was not impressive, which is unfortunate considering Anushka is a pretty good actress.  Ranbir Kapoor truly threw himself into the role however as the eager, power hungry criminal. You can literally see the crazed emotions in his eyes when he becomes a psychotic killing machine. The actor who surprised the most was Satyadeep Misra, he played Chimman so naturally I cannot picture anyone else in the same role! His eyes, his body language, the tone of his voice, everything was on point when he took the screen. Karan Johar essentially played himself, a tough, powerful man who can take you to new heights with one phone call. For a non-actor though he did do the role quite well, he exuded power when necessary and expressed emotions well. Manish Choudhary as Jimmy, Kay Kay Menon as Inspector Vishwas and Vivaan Shah as Tony the driver were all effective in their respective roles.

Due to British control, the culture of America’s roaring 20’s didn’t reach India until after independence, which was depicted beautifully in the film. The costumes and sets were meticulously cared for, from hairstyles to accessories! Everything screamed old Hollywood glamour! National award winning costume designer, Niharika Khan even mentioned that Bombay Velvet has been her biggest challenge, well challenge won! Khan does a stunning job! The Hindi Jazz music was something very unique and the songs are all so powerful. Amit Trivedi and Mikey McCleary brilliantly composed these songs like the catchy “Fifi,” “Mohabbat Buri Bimari” and “Naak Pe Gussa.” Further taking on inspiration from Martin Scorscese, the film was even edited by Scorscese’s editor, Thelma Shoonmaker. Indian editor Prerna Saigal flew all the way to New York City to work with Shoonmaker! It was definitely worth all the efforts! 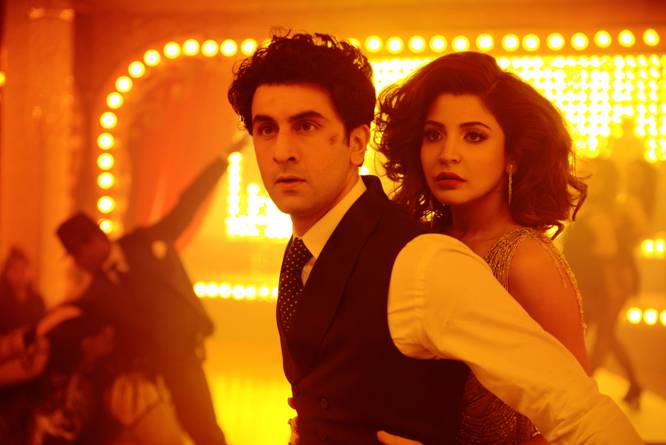 The accurate history, detailed sets, elaborate costumes, novel music, talented direction and amazing cast really hit the mark. Though the story, dialogue and imitation of classic films can become tiring, I’d still recommend this movie because Ranbir and Satyadeep are definitely worth watching! I’ve given this movie a rating of 3.5 out of 5, do you agree? Leave a comment and let us know!