Rapper/Producer DeLon from Los Angeles joins forces with the singing/rapping duo Pankhuri Awasthi and Uppekha Jain, known as BomBaebs from Mumbai. Together they take the girls’ initial message from their viral Youtube video #RapAgainstRape to iTunes. This might arguably be one of the most creative songs against rape ever released. DeLon heard the BomBaebs on Youtube and reached out to the girls to do a collaboration. 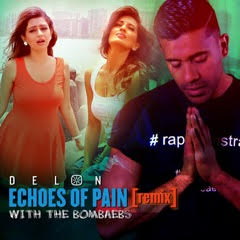 Three weeks later Echoes of Pain [Remix] was born.Echoes of Pain [Remix] is dedicated to women who suffered from violation and rape, as well as, to encourage them and others to help create a better future. The BomBaebs talk about what is really needed for the country to start healing with regards to how women are perceived, treated and how to fight for women rights. DeLon very ferociously describes two shocking stories about rape incidents in India that hit news stations all over the world in order to illustrate the terrible truth. In one incident a 70-year-old Sister Superior was raped whereas in another occasion a 23-year-old girl was a victim of a gang rape, which led to her death. Great music and Human Rights combined…Why hasn’t anybody else come up with that yet? DeLon and the BomBaebs set an example of how to get attention in a progressive way. It’s sad to see that powerful artists, like Kanye West, are more concerned about fashion than about what’s happening in the world and how to make a change for the better, at least not knowingly. DeLon and the BomBaebs feel that it’s time to change that and are pioneers in their field.

The BomBaebs and DeLon are artists whose main purpose is to have a positive influence in the world, and this song is the first step towards opening up the dialogue about change. It’s also an invitation for other rappers, singers or anybody else to support this campaign. The goal is to achieve international recognition and to merge this campaign with other bigger campaigns like Emma Watson’s HeForShe campaign for gender equality. It’s all about uniting forces to fulfill a certain purpose, in this specific case, women rights.

DeLon emphasizes respect for women on all levels in order to achieve equal treatment,rights and opportunities as shown by the lines below: “Women are beautiful, give love, sent from up above the heavens, amazing, god’s best creation…” (Quote from DeLon’s rap)

50% of the profits from the Echoes of Pain Remix go to the Youth for Human Rights organization. Support the movement and buy the song on iTunes!