Director-Producer Sajid Khan, who is famous for films in the slapstick comedy genre, is now officially present on Twitter! He is known for his unabashed comments on various topics, whether that be films or otherwise. With his quirky personality, looks like Mr.Khan is going to bring to Twitter a daily dose of uninhibited humour and opinionated views.

The veteran actor, Rishi Kapoor, recently joined the Twitter fraternity and gained a huge number of followers as well as appreciation for his frank and honest approach we hope that Sajid Khan follows suit.

Not to mention, his twitter handle @SimplySajidK is quite innovative too and this is what his Bio says: 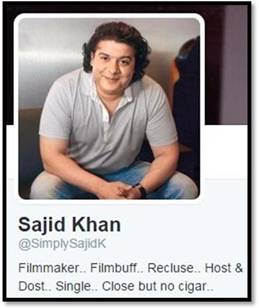 And his first tweet made us smile! Here’s what it says :

His friends from the industry have tweeted welcoming the ‘Funny Khan’ on Twitter :