Detective Byomkesh Bakshy, a crime-thriller film directed by Dibakar Banerjee and produced by Yash Raj Films (Aditya Chopra). After three months of constant unsuccessful films, we finally get a taste of the kind of cinema I thrive to see on the big-screen from Indian filmmakers. The film is based on the fictional detective “Byomkesh Bakshi” created by the Bengali writer Sharadindu Bandyopadhya.

As I only had time to catch the late showtime tonight at 11pm, I was afraid my lack of sleep would have caught up on me during the film. Instead, Dibakar Banerjee’s story grasped my mind in a different time period in 1942 Calcutta during Brittish-ruled India. While patience is surely needed while watching the film, your eyes won’t leave the screen and sitting at the edge of your seat is indeed to happen. 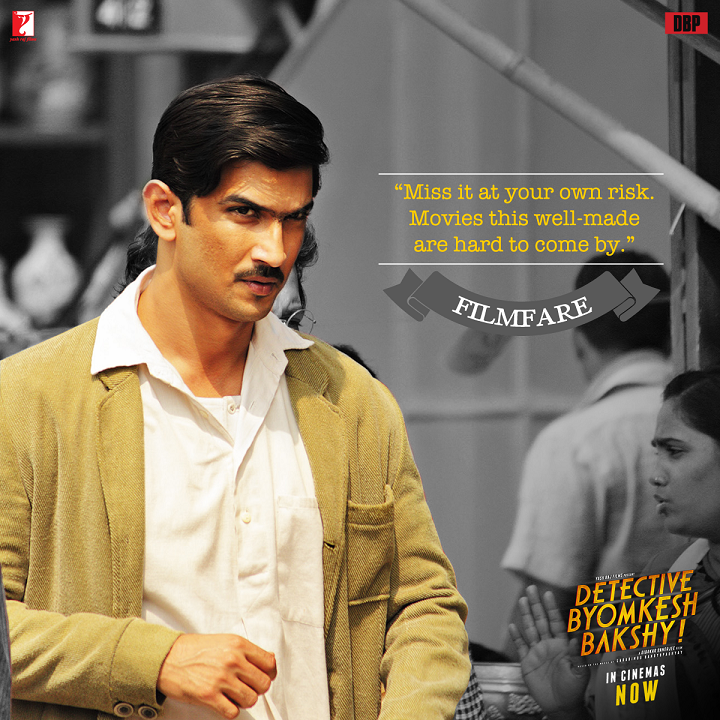 A lot! Let’s begin with the execution of the set-design and costume. Set-designer, Vandana Kataria did an outstanding job in catching every detail of the time period, every sort of transportation and magazine in the background of each scene was placed correctly. I really felt I was in 1942 pre-independence era in Calcutta. Costume designers, Manoshi Nath, Rushi Sharma and Manish Malhotra did an outstanding job on every single characters costume, and also portrayed each characters lifestyle through their appearance.

The characters were my next favorite part of the film. Sushant Singh Rajput has been seen in a versatile platform of roles, from Kai Po Che to Shuddh Desi Romance, PK and now playing the role as Detective Bakshy! I have loved Sushant since his first film and I believe he is slowly reaching the top to the next best actor in b-town. Every dialogue delivered and the thought process he illustrated on screen as Detective Bakshy was incredible. There are other characters though who were a huge facet to this story, Anand Tiwari as Ajit Banerjee, the soul to the film and Sushant’s sidekick. And the rest of the supporting cast, Divya Menon as Satyawati, Swastika Mukherjee as Devi Anguri and many more who created realism on-screen through their unique characters.

In addition to the presentation of the film, the power which lied in the dialogues and direction of the film is what amazed me. While my friend and I were driving to the cinema, she asked me what the film was about and I said, “honestly I have not looked into it much” and she said, “it better be good!” I responded saying this;

“The film is not what is good, it is the director who has to be good.”

I am astound by Dibakar’s writing and direction for the film, every little detail was touched upon. It was grasping from the first scene to the end of the credits. You could fall asleep for five minutes, wake up and still understand what was going on in the film. 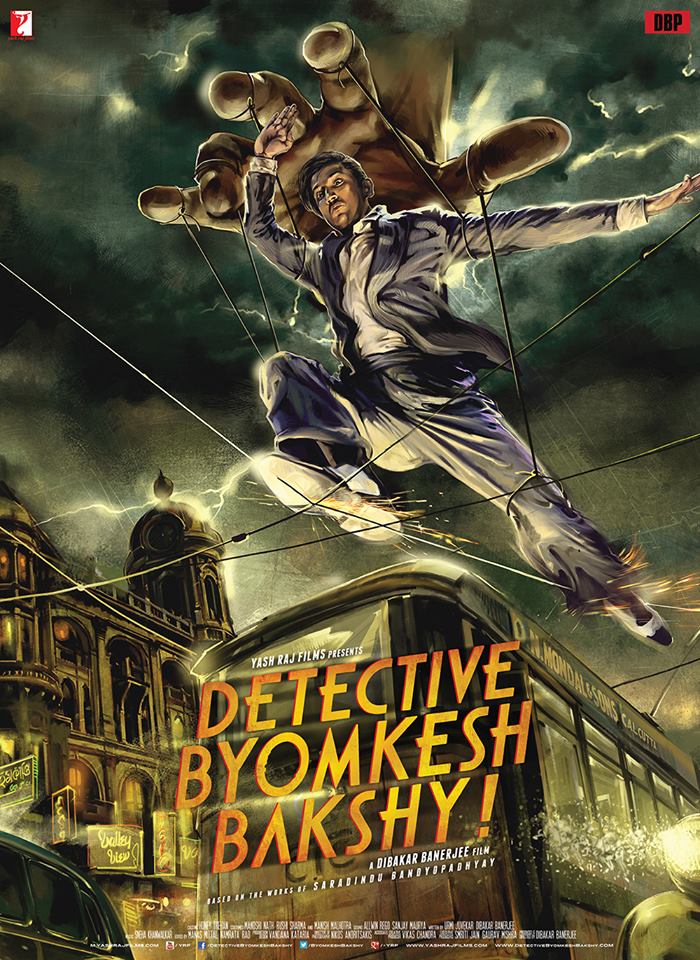 And lastly, what I found so different about the film was the music. I was so happy to see no random item songs thrown in or busting out into a random dance in the film. If such an event were to occur in the film, it would have just been like any other film. The music which has been created by various artists, had a different feel and helped move the film forward. Most of it was ‘background score’ music. It had a little bit of modern, traditional, classical and even a bit of heavy metal. If I’m not mistaken, out of the seven tracks of the film, four of them are remakes of previously written material – PCRC’s “Pariquel” off their 2011 debut album Sinema, and now has Hindi lyrics by front-man Suryakant Sawhney, BLEK’s 2012 song “Fog & Strobe” includes thumri vocals by playback singer Usri Banerjee, Madboy/Mink’s “Taste Your Kiss” includes verses in Hindi from vocalist Saba Azad and Joint Family’s “Life’s A Bitch,” stays true to its original 2007 version from their album Hot Box.

On my drive back home from the movie theater, I was so happy. I was feeling sick not seeing any film for the last three months and reading constant bad reviews on films that have released. I was hungry to see a good film and I am so happy that my heart, mind and stomach are all satisfied by this phenomenal quality film!

I hope that in the crowd of main-stream cinema, films like Detective Byomkesh Bakshy will not only be recognized by it’s unique creation, but also inspire other filmmakers to create different films and bring them onto the big-screen.

Rating for Detective Byomkesh Bakshy is

Keep Reading,
Keep Watching &
See You At The Movies! 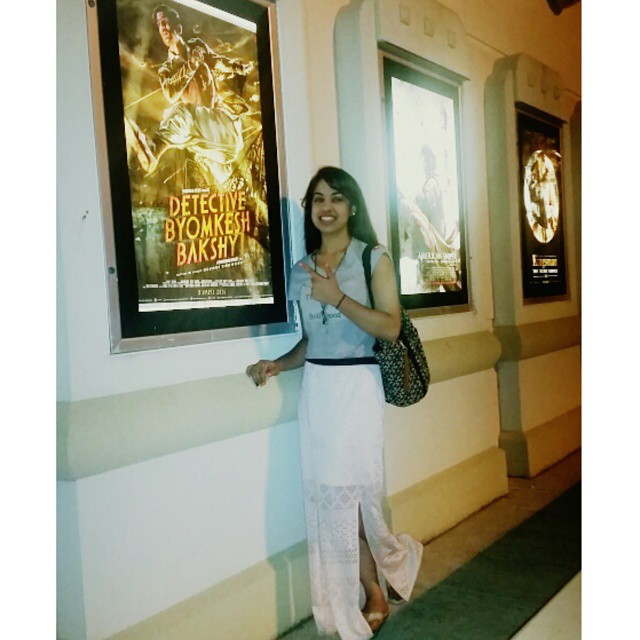 Check out the creation of one of the major sets of the film! 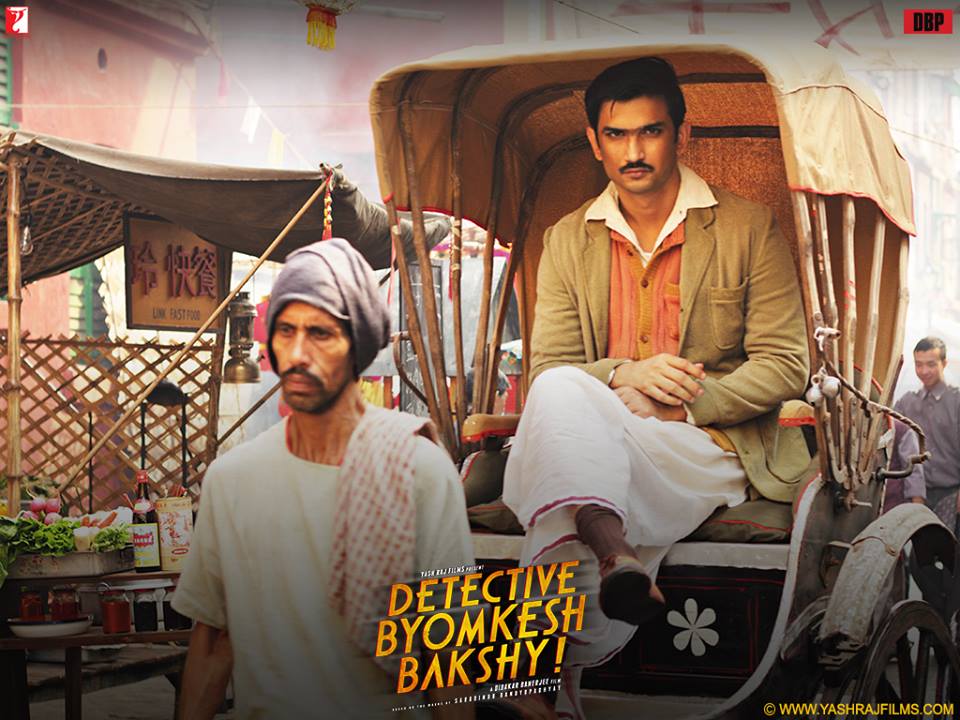