The controversial new film, UNFREEDOM, has unveiled its first theatrical trailer. Banned in India and featuring an ensemble cast including Victor Banerjee, the provocative film will be released uncut in U.S. theaters on May 29.

UNFREEDOM juxtaposes two powerful and unflinching contemporary stories about religious fundamentalism and intolerance. Shifting between New York and New Delhi, one tale follows a Muslim terrorist who kidnaps a liberal Muslim scholar in order to silence him, while the other charts the travails of a young woman whose devout father tries to force her into an arranged marriage, which she resists because she is secretly in love with another woman. The four characters come face to face with gruesome acts of violence in battles of identity, sexuality, religion, love, and family. 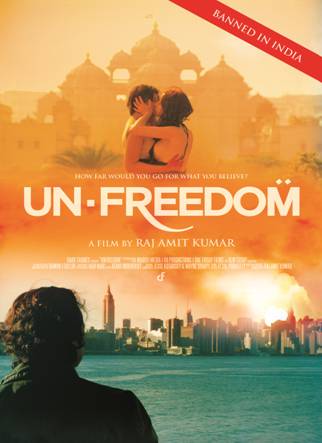 Recently, UNFREEDOM was banned in India by the Censor Board of Film Certification (CBFC), which rendered much of its content too controversial for general audiences. Kumar is mounting an appeal and simultaneously launching a crowd-funding campaign to finance a release in India via alternative methods. Homosexuality was criminalized in India in 2013 and incidents of rape have been escalating. In addition, for more than a decade, India has been mired in the politics of religious violence between Hindus and Muslims.

UNFREEDOM is a hard-hitting attempt to show the intertwined relationships of religion, violence, sexuality, and intolerance.