Simon Nandhra returns this 26th March with his brand new singe ‘Dil Mangdi 2’, featuring the vocals of Jatinder Singh (formerly known as Jati Cheed) and Jaswinder Jassi. The singe will be releasing worldwide via Infamous Productionz and ACME Muzic!

After a hiatus of almost 4 years, Simon Nandhra returns to the scene with a keen sense of purpose to make his best music to date. ‘Dil Mangdi 2’ marks the first single from Simon’s forthcoming solo album titled The Awakening. With the original song releasing over 10 years ago on the album Underestimated, Simon Nandhra has followed up this cult anthem with a distinguished part 2. Now, as a independent artist, Simon Nandhra is enjoying his own musical awakening, beginning with “Dil Mangdi 2.” 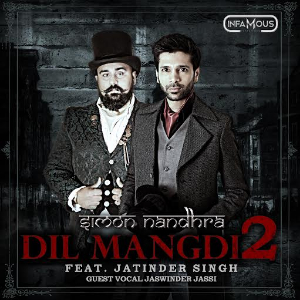 Cutting no corners in making “Dil Mangdi 2,” Simon Nandhra has called on the best of the best in UK Bhangra Music to create this new single. The song has been written and composed by GV, whilst Simon has visited the best studios across the country to try to ensure the best sound is delivered.

The legendary Kam Frantic has played the guitar and mandolin pieces, whilst percussion was recorded at the famous Planet Studios. Simon utilized three of the most experienced and brilliant engineers in the scene, Kam Frantic, Tom Lowry and Sukhi Chand to ensure the sound of ‘Dil Mangdi 2’ was tweaked to perfection & reflected a true sound of UK Bhangra.