Public Health England is launching the annual ‘Act FAST’ campaign, which highlights the common symptoms of stroke and mini strokes and encourages people to call 999 if they notice the symptoms in others or experience them themselves. The campaign specifically targets South Asians as it is crucially important that these groups know the symptoms of stroke and mini strokes as their risk is around double the general population in the UK.

A mini stroke has similar symptoms to a full stroke, except that these symptoms last for a much shorter amount of time. Without immediate treatment, around one in five of those who experience a mini stroke will go on to have a full stroke within a few days. Early intervention following a mini stroke can greatly reduce the risk of having another stroke. However, while 59% of people surveyed cite stroke as one of the top three conditions they are concerned about behind cancer, new research reveals today that less than half (45%) would call 999 if they experienced the symptoms of a mini stroke.

Since the Act FAST campaign launched in 2009, an additional 38,600 people have got to hospital within the vital three-hour window meaning that stroke sufferers receive the immediate medical treatment required. This not only results in a greater chance of better recovery, but since the campaign launch over 4,000 fewer people have become disabled as a result of a stroke.

The campaign urges people to Act FAST if they notice any of the following symptoms, even if they disappear within a short space of time:
• Face – has their face fallen on one side? Can they smile?
• Arms – can they raise both their arms and keep them there?
• Speech – is their speech slurred? If they notice any of these symptoms it is
• Time – time to call 999 if you see any single one of these signs.

Although the symptoms of FAST are what people will be trained to focus on there are other symptoms of a stroke and a mini stroke which includes:
• Sudden loss of vision or blurred vision in one or both eyes
• Sudden weakness or numbness on one side of the body
• Sudden memory loss or confusion
• Sudden dizziness, unsteadiness or a sudden fall, especially with any of
the other symptoms.

“The impressive results from previous Act FAST campaigns show just how important it is that we continue to raise awareness of the symptoms of stroke especially amongst high risk ethnic groups like South Asians where there is a higher prevalence of high blood pressure and diabetes which are significant risk factors that cause strokes. Highlighting the importance of treating mini strokes with the same urgency as strokes can also make a huge difference – around 10,000 strokes could be prevented annually if mini strokes were treated in time. That’s why the Act FAST campaign encourages people experiencing stroke-like symptoms to call 999.” 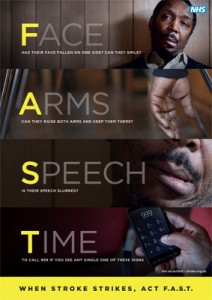 “Family is a really important part of my life, and when a family member has a stroke, it can be devastating for the patient and the rest of the family. As a community we have a higher risk of stroke than the general population so knowing the signs to look out for is crucial for us. If you or a family member experiences any of the symptoms of a mini-stroke or stroke, please call 999, take immediate action – don’t put it off till tomorrow – it could save a loved one’s life.”

Bhasker Patel, Emmerdale actor and campaign supporter also repeated Sanjeev Bhasker’s sentiments that the risks are high and we should call for help immediately. Patel stressed that we shouldn’t hesitate to ask for help. We hope these tips help our readers and for more information on the Act FAST campaign visit www.nhs.uk/actfast.