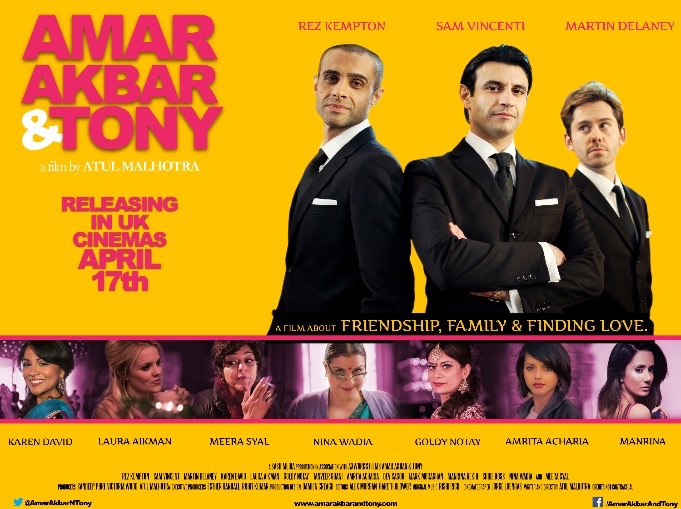 “A romantic comedy drama depicting the lives of three childhood friends in the unique and vibrant landscape of multicultural London. The title is inspired by the 1970’s Bollywood hit ‘Amar Akbar Anthony’ and also ‘takes in a spiritual influence from the film.”

A Sikh, Muslim and Irish Catholic take stock of their lives in contemporary London as the film explores the predicaments that face its lead trio. Amar (Rez Kempton – Mystic Masseur, Spooks) is a Sikh whose promising legal career gets derailed, Akbar (Sam Vincenti – Waking The Dead, Alfie) is an ambitious charmer with the gift of the gab and some acute observations on life, while Tony (Martin Delaney – Zero Dark Thirty, Flags of Our Fathers) constantly finds himself in love with the wrong woman.
The 93-minute movie is a serio-comic exploration of ambition and friendship being thwarted by external factors. The film identifiably belongs to the multicultural Britain of the present, and the problems faced by the trio transcend time and place.
The film also includes Karen David (ABC’s Galavant, Jack Ryan, Scorpion King) as Meera, Laura Aikman (Keith Lemon: La Vida Loca) as Samantha, Goldy Notay (It’s a Wonderful Afterlife, Sex in the City 2) as Sonia and Amrita Acharia (Game Of Thrones) as Richa. With special appearances from British comedy legends Meera Syal as the voracious Honey and Nina Wadia as stern matchmaker Seema.
The original soundtrack and score for the film is composed by prolific and ground-breaking music producer Rishi Rich.

Amar Akbar & Tony will be released on selected screens across the country on 17th April 2015.