Bipasha Basu enjoys the “like-minded” company of actor Karan Singh Grover, who has made his Bollywood debut alongside her in “Alone”. She says that just because their “togetherness” is being interpreted otherwise, she won’t stop going out with him.

In an interview, Bipasha clears rumours of her camaraderie with Karan, opening up on whether he’s the new man in her life.

Check out what she had to say about the co-star!

Q. Are you and Karan Singh Grover together, or is it just a marketing strategy?

A. We are together, because we are promoting our film “Alone” together. Since our film is coming out we have no choice but to go for its promotion together.

Q. So it is a marketing strategy?

A. If you want to call it that, then yes, that is the strategy to it…if you do a film together, you’ve to promote it together. Having said that, we’ve been bonding really well during the course of the film. Whether it is going out for a movie, or out for dinner with a group of friends.

Q. But the perception being created is that he is the new man in your life?

A. I won’t stop socialising with him because of that. I’ve a bunch of friends and Karan is one of them. I am not into strategies. Karan and I are like-minded people, and we get along really well. I’ve taken home two friendships from the sets of ‘Alone’, Karan and my director Bhushan Patel. Karan, Bhushan and I do a lot of nights outs together. Luckily, we aren’t photographed every time we step out. Bhushan’s place in my social circle is not talked about.

A. It’s exciting and inviting and enticing. I saw the rough cut of the film without the special effects and it scared the hell out of me. It’s an emotionally intense triangular love story among two women and one man. The twist in the tale is that one of the two women is dead.

Q. Happy with the results?

A. I must say I got scared seeing myself on screen. And mind you,there were no special effects. I still got scared.

Q. “Alone” has released along with a bunch of other films. Is that a good strategy?

A. The buzz about our film is positive. And really, we can’t get a clear window in today’s day and age. So just believe in your film and go right ahead and release it.

Q. You are the hero in your past few films?

A. No, I am not. In “Creature”, the creature was the hero. In “Alone”, it’s the conjoined twins that is the USP. In fact, I should’ve been paid double for “Alone” because I’ve done two roles.

Q. This is not your first double role? 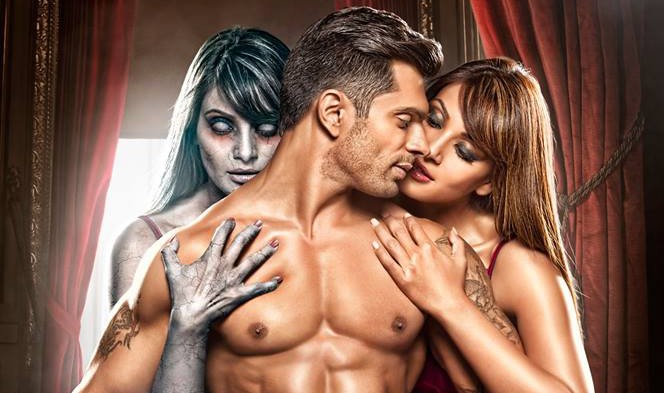 A. No, I had fun double roles in “Dhoom” and “All The Best”. In the latter, I was never supposed to play the African girl at the end. On an impulse, I did the other role. “Alone” is my first real double role.

Q. Was this your toughest role?

A. No, every film comes with its own challenge.

Q. How are you positioned in your life right now?

A. Very comfortably. I am very happy, very calm. I am just focusing on my happiness. That won’t stop. I definitely use this platform as an actor that I’ve been gifted with along with the love of happiness, to influence people into physical fitness. And if I don’t follow my own principles of a good life, then you can’t be taken seriously.

Q. So what’s your magic mantra for survival?

A. It’s very simple, really. When you’re happy you’re always going to look better and your skin will glow.

Q. When you look into the mirror what do you see?

A. A crazy drama queen. I think I bring a lot of joy in people’s lives.