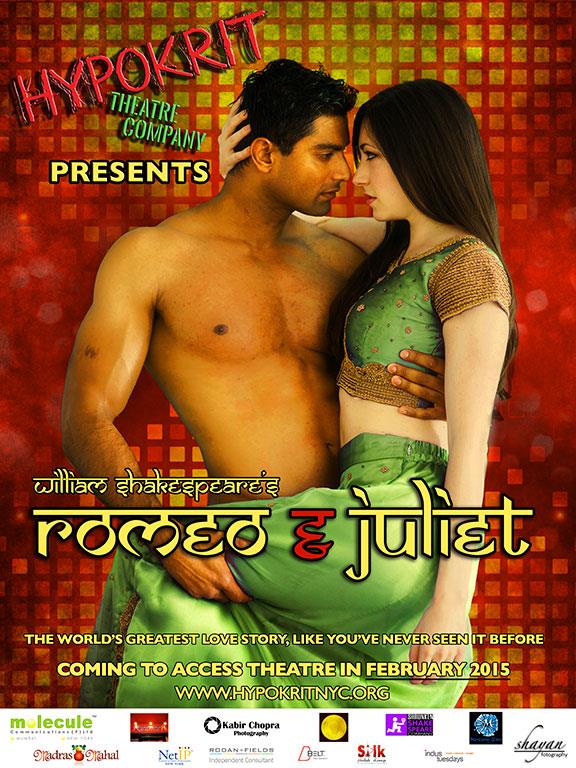 When it comes to Bollywood, there is no doubt that the go-to Shakespeare play for filmmakers is “Romeo and Juliet.”  It’s a story that resonates well with the Indian audience.  In Bollywood, it has been adapted to the big screen in films like, “Qayamat Se Qayamat Tak,” “Bollywood Queen,” “Maro Charitra,” “Ishaqzaade,” “Issaq,” and, most recently, “Goliyon Ki Raasleela Ram-Leela“.

“Hypokrit Theatre Company” was founded by Arpita Mukherjee and Shubhra Prakash in 2010.  The company’s mission is to “encourage artistic inquiry and break down the artifice in a work to reach its emotional core. Interested in positing the question of what makes a story universal, we are dedicated to adapting classics, both time-tested and brand new. Our mission is expressed through the choice of setting and time period. Through the collision of different worlds and aesthetics, Hypokrit challenges notions of universality in a multicultural world.”

Regarding the production, Shubhra Prakash said, “What we can’t do without big budgets, we can do with a big imagination. Experimental theatre, race-blind casting, and diverse voices don’t have to mean low-cost and/or low quality theatre.”

The play will officially debut on February 6 at Access Theater in NYC (380 Broadway, New York, NY 10013).  Tickets are now on sale for the production, with opening night already completely sold out.