Television actor and the man behind all of this #GulatiFever took home the trophy and 50 Lakh prize money! Gautam Gulati played a good game and this khiladi is a deserving winner for sure! Actress Karishma Tanna was in second place and RJ Preetam Singh came in third. 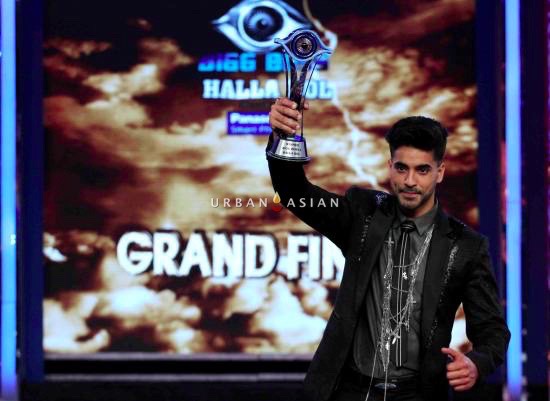 The night before the final five contestants resolved all of the issues they had with each other in the house and happily spent their last day together. Dimply Ganguly and Ali Quli Mirza were eliminated the day before the grand finale. As a twist Bigg Boss actually offered the three remaining contestants a 25 Lakh prize if they left the house. Preetam Singh took the prize but Karishma Tanna and Gautam Gulati decided to stay in the game and not take the consolation prize. Preetam Singh was actually the second most popular contestant on the show until his fall out with Gautam Gulati at the end of December and he lost the spot to Karishma Tanna.

The star studded finale was full of action with loads of performances by contestants and guests like Malika Arora Khan, Sonakshi Sinha and Rohit Shetty.  Of course, Farah Khan was back to host the whole event. The contestants all looked amazing and performed in full force for their last day in the Bigg Boss house. Contestants from Rohit Shetty’s new show Fear Factor: Khatron Ke Khiladi season 6, also performed which included Ashish Chowdhury, Sana Khan and Hussain Kuwajerwala.

Gautam Gulati’s win was announced after that and we’re sure fans are very happy with this result. What do you think? Did you have another winner in mind? Let us know!