Social media is a powerful tool and global heartthrob and Bollywood superstar Hrithik Roshan has given us an apt example for this. What started with an idea of inspiring and challenging people to push their limits, transpired into a huge digital campaign of #BangBangDare for his latest movie Bang Bang!

While movies today are increasingly promoting themselves on digital platforms, Hrithik has taken the whole industry by storm by his unique campaign #BangBangDare which not only utilizes the digital platform effectively, but has also involved all of B-town and its fans! Hrithik has given dares to 16 popular celebrities of which, 15 have already been accepted and executed! Direct impressions generated only by celebrities on Twitter are 162.8 Million. One of the most celebrated actors of Bollywood, Ranveer Singh who completed the dare within 24 hours had his video trending for over three days on YouTube hitting about 3.6 million views.

The video went viral as soon as Ranveer Singh tweeted his #BangBangDare video to Hrithik: 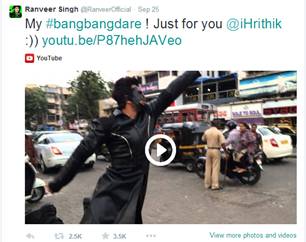 The impact of this activity was so high that #BangBangDare hashtag generated 42,660 tweets by 28,440 users worldwide. The potential impressions of these tweets were over 1.7 Billion. On Instagram too, the #BangBangDare went to 271,068 followers which received 15,574 likes. At the same time, on Facebook, the Bang Bang Dare reached out to 39.47 Million viewers.

So impressed was Shahid Kapoor with Ranveer Singh’s response to the dare that he went ahead and promoted the same even though he was not challenged. Shahid even tweeted Hrithik to dare him.

One of the visible turnouts of the Bang Bang Dare was the showcase of the camaraderie shared amongst each other by the Bollywood celebrities who took and promoted the activity. The fans were obviously impressed with this display of affection and looked forward to the next celebrity dares that were to be a part of this exciting activity.The Bang Bang Dare generated over 2000 links online and was also covered by many leading publications like Times Of India, Hindustan Times offline, thus ensuring its virility.

To add to it, popular online linen store Bedbathmore.com took the activity offline with their own #Bangbangdare to Hrithik and hosted a huge hoarding in Juhu near the superstar’s house with the dare. 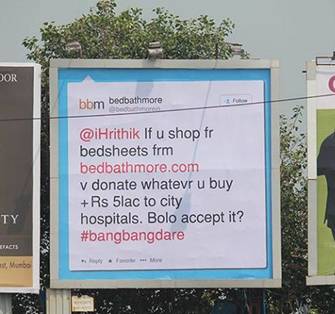 It was interesting to see Hrithik, Shahid Kapoor and Shraddha Kapoor take up the dare and promote each other’s work by appreciating in spite of having their film releasing on the same day. If this wasn’t to turn into a phenomenon, what else would? Bang Bang went on to become a huge success at the Box Office, the perfect conclusion to the exciting activity that began before the film.