Coca-Cola India, NDTV and UN-Habitat’s multi partner program for Happy, Healthy and Active schools –Support My School will now scale up its effort to touch 1000 schools and 3,60,000 students in next two years. The third season of the program, an effort that started in 2009, aims to add to the Government’s efforts under the “Swaach Bharat, SwacchVidyalaya” initiative. 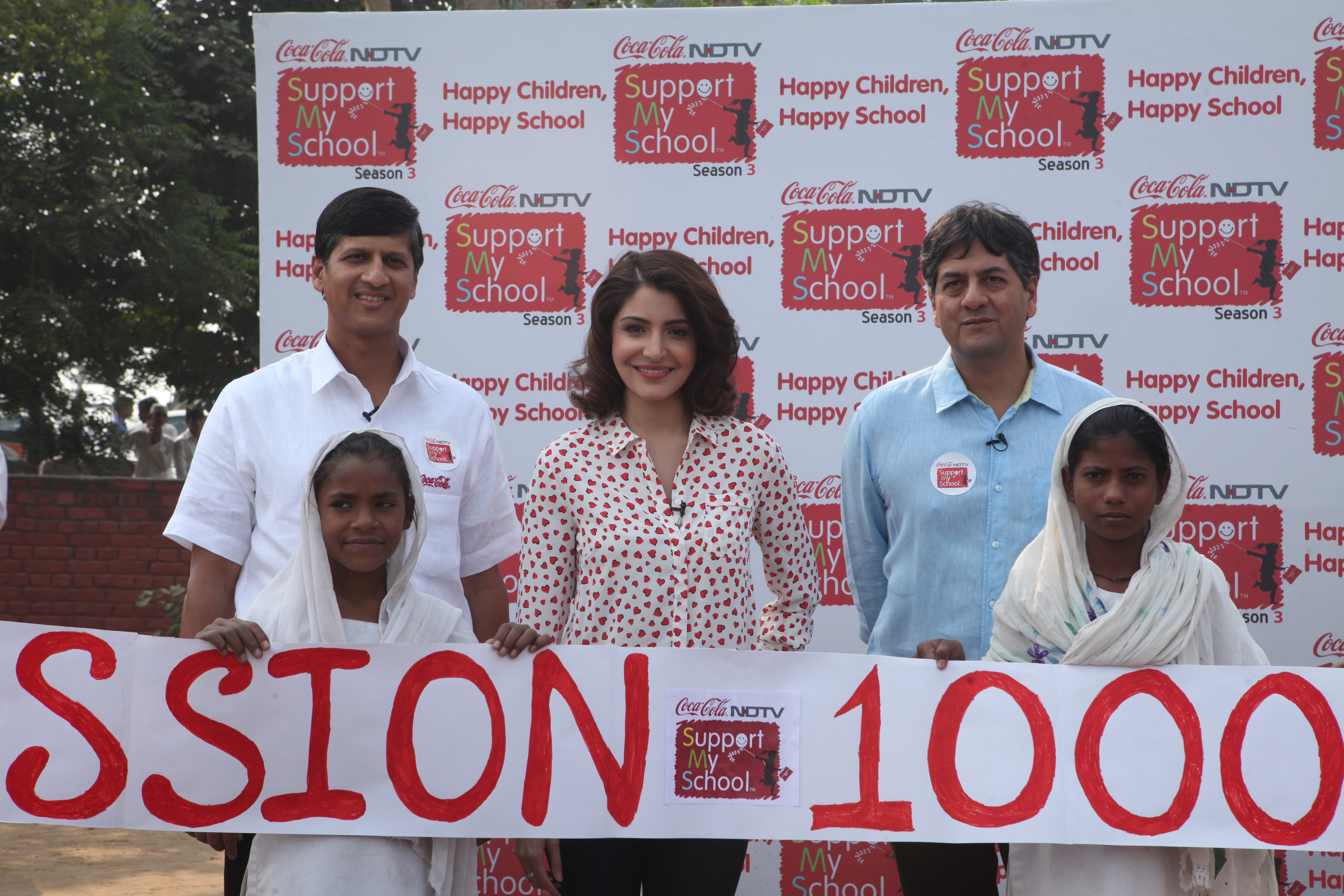 Support My School is a WASH (Water, Sanitation and Hygiene) initiative that aims to improve basic amenities in government schools like separate toilets for boys and girls andaccess to water. The Campaign is also committed to developing the overall infrastructure like playgroundand a clean environment to encourage a holistic learning environment. The campaign, in its first 4 years, has already revitalized 370 schools in 20 states across the country impacting nearly 120,000 students. The schools were revitalized with contributions of nearly Rs 20 crores. The Schools revitalized under the campaign have served as model schools in several districts and have led to enhanced community engagement and higher emphasis on attendance and enrollment. 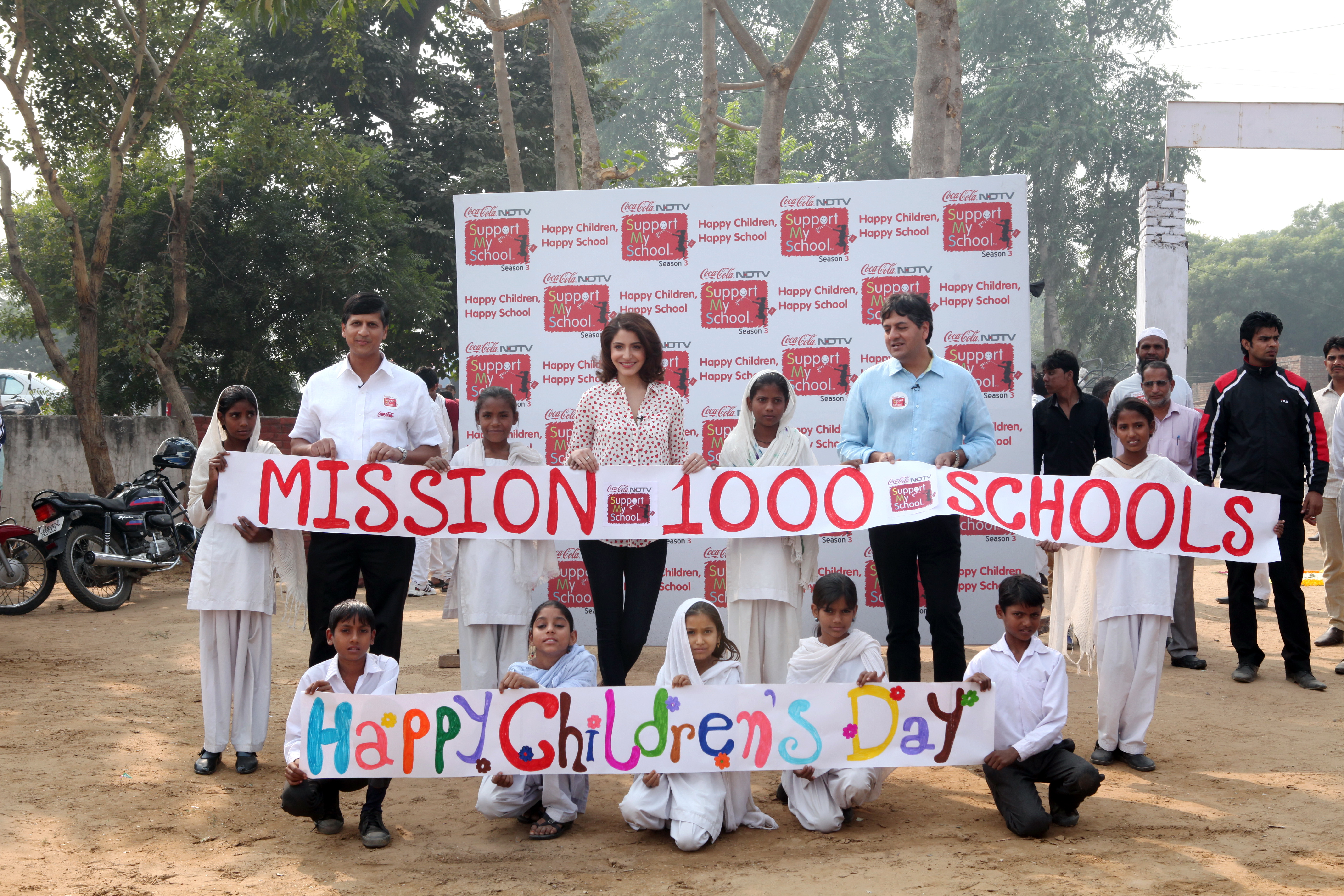 Bollywood actress Anushka Sharma joined the students to celebrate Children’s Day with them. She saw the progress at the schools and how the Support My School initiative has been able to facilitate the education especially of the Girl Child.

Extending her support to the campaign, Anushka Sharma said,

“I am very excited to be here today and celebrate Children’s Day in this particular school that has been revitalized by the Support My School Campaign. Today when we as a country have had so many achievements at the global platform, it is disappointing to see that basic sanitation amenities are lacking in the country targeting children who suffer the most. After seeing this school and the changes this campaign has brought about, I am very happy to know that Support My School is being taken to 1000 more schools in India. We need more such initiatives that focus on students’ needs of clean water, proper sanitation, facilities for sports and libraries etc. – so that these students get a holistic and hygienic upbringing, just like we all did. Congratulations to all the partners for a job well done.”

Education in rural India suffer from several issues where lack of sanitation is a key reason for absenteeism and dropouts amongst students. This is especially noted in young girls who are forced to quit as they enter adolescence due to a lack of clean and functional toilets. Support My School campaign began as a response to several studies which indicated that a large number of schools in rural & semi-urban areas lacked basic amenities leading to accelerated student drop-out rates. The campaign has been creating awareness about the conditions of schools in these areas, fostering a private-public partnership where corporate organizations step in to reinstall basic facilities in these government-run schools.

“We at NDTV have always been committed to initiatives that bring about positive changes in society. We are proud to partner with Coca-Cola for this campaign and extend our support to the students’ needs of adequate hygiene and sanitation facilities. We hope that the Support My School campaign successfully revitalizes the 1000 schools it aims to in the next two years and that we can extend support to many more such schools in the country in the future.”

Dr. Suresh Reddy, Director, SRF Foundation said, “We are proud to be a part of the Support My School campaign which has brought about a positive change to education and sanitation in many schools in India We had taken learnings from Season 1 to ensure that we provide a holistic development infrastructure to schools in Season 2. There are many schools where the enrollment has increased post the work done under SMS and it is great to see that. We look forward to another great year ahead under Season 3.”

“Support My School has given a new lease of life to our school and has really helped boost morale among our students. I thank Tetrapak, Enrich Agro, SRF Foundation and Coca-Cola for the funds and the efforts which have brought this transformation to our school.”

A wonderful program to support, we’re very proud of Anushka Sharma using her popularity to bring attention to a worthy cause like this. Stay tuned for more updates on this lovely star!