They say that the best things come to those who wait, and in the new comedy film The Shaukeens, which releases on 7th November 2014, three men in the twilight of their lives embark on a roller-coaster adventure of fun and frivolity, ensuring that their lives will never be the same again. 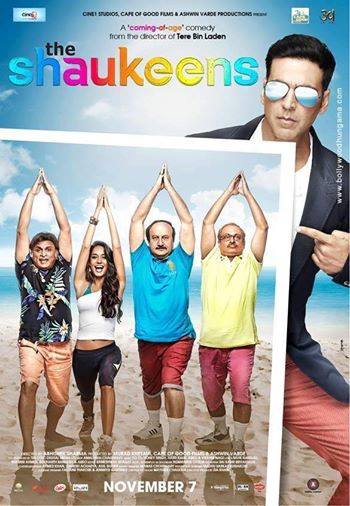 A remake of Basu Chatterjee’s 1982 hit comedy ‘Shaukeen’, The Shaukeens is produced by Murad Khetani through Cape of Good Films and Ashwin Varde. National Award Winning Writer Tigmanshu Dhulia (Paan Singh Tomaar) and Director, Abhishek Sharma (Tere Bin Laden) are said to have created the film with the idea that all the cast could have fun laughing at themselves and each other. The film is perfect viewing for anyone who wants to enjoy some light-hearted escapism and plenty of laughter.

The Shaukeens stars veterans Annu Kapoor, Piyush Mishra and Anupam Kher, three men who venture on a trip to Bangkok, after hiring a driver, played by superstar Akshay Kumar in a special appearance. On their arrival in Bangkok, they meet the sultry Lisa Haydon, who plays Ahana, a singer and dancer who works in a local club. Upon meeting Ahana, the three mischievous rascals do their very best to spend time impressing her, hilariously oblivious to the fact that she is their driver’s love interest.

The film’s creative motion poster, in which we can hear voices and see visuals of three sets of dentures, has already been arousing curiosity amongst film goers. The motion poster gives away very little and leaves fans guessing as to what twists and turns are in store in the film.

Audiences will also be treated to an upbeat, summer-infused soundtrack, featuring heavyweight musical talents such as Yo Yo Honey Singh, who received a personal invitation from Akshay Kumar himself, to pen a special track, named ‘Alcoholic’ for the film. Sung by Yo Yo, the video for the track shows Akshay and his stunning leading lady, Lisa, dancing upon a luxury yacht on the beautiful waters of Pattaya.

Fans can also look forward to seeing a signature Akshay Kumar stunt, which is said to have been inspired by the hit cartoon show ‘Tom and Jerry’. A little creative thinking and some bravery by Akshay and the stunt has now become part of The Shaukeens.

Live young with this year’s must-see laugh out loud comedy, The Shaukeens, out on November 7th 2014.