Last week, East Delhi was alight with excitement as filming got underway next to the Mayur Vihar Extn Metro station and passers-by were able to catch a glimpse of superstars Hrithik Roshan and Bang Bang co-star, Katrina Kaif, as they filmed scenes from the forthcoming action thriller, which is a remake of the Hollywood Tom Cruise-Cameron Diaz starrer Knight And Day. Bang Bang is due for release in October 2014. 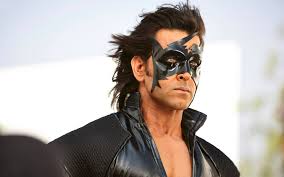 Whilst in Delhi, India’s first on-screen superhero became a real-life superhero, as he kindly offered his services to the Delhi Traffic Police, by volunteering to be part of a Road Safety Campaign. Anil Shukla, Additional Commissioner of Police, confirmed this, saying:

“He will talk about traffic – not jumping red light, using seat belts, not driving drunk or rashly and other such things”.

Both Hrithik and Katrina were based at India Gate, where they advised commuters on proactive road safety.

Most recently, the talented Hrithik enjoyed huge success with the internationally-acclaimed film Krrish 3, which shot straight to the top of the box office and cemented his status as one of India’s most talented, versatile and in-demand stars. Sci-fi blockbuster Krrish, which was produced by Hrithik, saw its trailer receive more views than Hollywood films Avengers and Thor, with over 16 million hits.

Hrithik Roshan also recently launched his new fashion brand – HRx – Push Your Extreme to a very positive reception. HRx represents India’s first celebrity brand extension project of this stature and the establishment of an active and sports inspired casual wear market in India. The tie-up is with multi-platform entertainment management company Exceed. Bringing a combination of eclectic style and extreme passion, the HRx brand aims to reach out to the masses with the admirable objective of inspiring people to be the very best that they can be, and to conquer new heights every day. To further extend the brand philosophy of HRx, plans are underway to spread awareness about fitness and well-being through a range of grass-root campaigning and synergies such as with schools, government bodies and other institutions.

From acting and fashion to road safety, it seems Hrithik Roshan’s hard work is never complete!